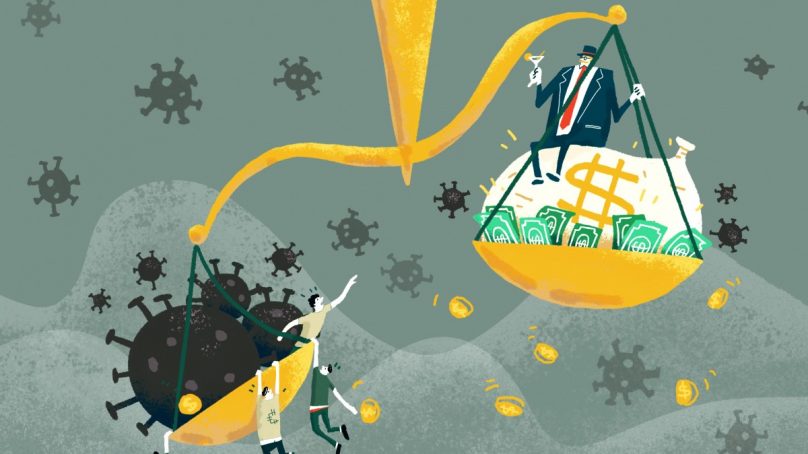 Coronavirus has widened inequalities further in countries and societies that were already grappling with the social and economic vice, which for long time has been a trigger of inter-class hostility, Human Rights Watch has documented in its December 2020 report.

Based on data collected in some of world’s megacities like New York, London, Beijing and Tokyo, HRW says the pandemic has worsened what was already a dire human rights situation with regard to access to basic needs like food, water, shelter, education and health.

The report says that inaction of the governments enabled the crisis to spiral out of control.

“Many governments did too little to help. And while more than nine per cent of the world’s population may experience extreme poverty manifested in a severe deprivation of basic needs, the combined wealth of global billionaires reached new heights. Up by $1.5 trillion in the last year, an amount that could lift everyone in extreme poverty – all 680 million people – above $5.50 per day for a year,” says the report released in the first week of January.

It found further that the economic gender gap has also widened too, as disproportionally lost jobs and had lower social protection coverage. With school closures and a move towards digital education, many have had to juggle – or choose between work and childcare – without supportive government and workplace policies to mitigate the impact.

HRW says, “Covid-19’s economic recession is global. But the level of pain largely varies by where a person lives. The governments of the Netherlands or Germany targeted relief at low-income earners, covering up to 90 per cent of lost wages if businesses did not lay off their employees. Indonesia provided free medical treatment to all, regardless of their registration to the national health insurance scheme.”

In other countries, people desperately in need of support were left high and dry. In the United States, HRW reports, much of the relief was temporary.

“In the first months of the crisis, poverty declined due to an expanded social safety net. But much of the relief expired in July. By October, more than eight million people fell into poverty – measured by the supplemental poverty measure that weighs income with living costs – and one in two households had trouble paying everyday expenses, like food or rent,” the investigation found.

Millions of people complained about inability to access healthcare after they their insurance lapsed. Where governments offered relief, it excluded informal workers or undocumented people like refugees. HRW points out that the disparity is a reflection of not only the world’s differing safety nets and decisions by governments as to whether to protect basic economic rights, but also countries’ choices over the use of Covid-19 relief funds.

Nigeria, Africa’s biggest economy, received the largest Covid-19 emergency financing package of $3.4 billion from the International Monetary Fund (IMF) to protect jobs and businesses. This does not include the millions it received in other forms of direct aid. Of concern to the IMF, though, is how these funds were used.

According to Human Rights Watch found that the vast majority of urban poor in Lagos were left without financial or in-kind support. Economic experts predict a steep global recession that will follow the coronavirus pandemic will “have deep and lasting aftershocks.”

“As governments continue to try to save their economies, they need to ensure that relief reaches the millions of people who are struggling to make ends meet, so that everyone has food, housing and other essentials and that relief is not captured by a wealthy few,” HRW reports.

Economists point out that governments will have to take bold steps to build a more just and rights-based economic recovery that “confronts, not exacerbates, inequality.”

This includes ensuring a role in decision-making for those most affected by the economic crisis and those meant to benefit from relief assistance, will be critical.

It means investing in public services and social protection systems, and introducing or strengthening progressive fiscal policies and taxation to fund programs, so that everyone can fulfil their right to a decent standard of living.

It explains that in coming years governments will be expected to face budget shortfalls and growing challenges repaying their debts. International economic actors, like the World Bank and IMF, should support countries in establishing adequate social protection floors and progressive tools for raising revenue instead of enforcing harmful austerity.

Portugal’s opposition to such austerity in 2015 demonstrates that another way of bringing an economy back on track is possible – one that occurs alongside stronger social protection, a higher minimum wage, and better pensions.

HRW wants economic inequality be addressed and given priority in economic recovery efforts to prevent hundreds of millions of people from falling into extreme poverty. It says most affected people already face intersectional forms of discrimination that limit their access to economic rights.

“Governments should be treating economic rights as the basic legal duties they are and ensure they guarantee them, for everyone,” the report says.

‘Most of honey exported by China is blended with syrup’