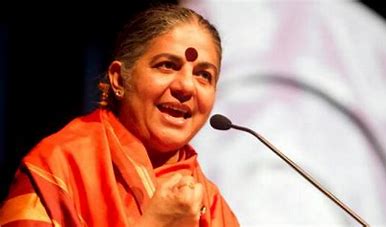 India recently eliminated all labour laws and currently, it is in the process of removing or amending the Farmers’ Rights Act, as well as environmental laws to ease access to food.

This is what allows for the transfer of wealth to happen, social justice and anti-genetically modified organism (GMO) advocate, Vandana Shiva, says.

As explained by Shiva, all of these companies are essentially rent collectors. Facebook turns our minds into raw material that is then capitalised upon. “Gates is particularly vicious because, through the Gates Foundation, he pretends to be doing philanthropy,” she says.

But with every philanthropic endeavour, he carves out new colonies from which he can collect new rents and make new investments. “That’s why no matter how much he gives, he gets richer and richer,” Shiva says. “A genuine giver would get poorer.”

In her book, she explains how, without Gates, there would be no commercial gene editing, for example, which is the new GMO. He created a company called Editas Medicine Inc to facilitate the patenting of these new climate-resilient plants, with which they aim to create new medicines.

“He will do biofortification to solve the nutrition problem. He is particularly vicious,” she says.

As for what the ultimate goal might be, Shiva says, “The first thing is, of course, they want to use their money-making tools to make more money. So, it is a dictatorship of the technology balance. That’s why people should be paying a lot more attention to the violent imposition of digitalisation.

“A lot of my friends, who never studied the roots of these violent systems, who never understood that agrichemicals came from Hitler’s concentration camps and the agrichemical industry is the poison cartel responsible for the genocide. They’re continuing that genocide.

“… technologies as tools of domination and exploitation are not neutral. A lot of progressives think, ‘More digitalisation, more democracy.’ How can a surveillance economy be an enlargement of your freedom?

They also want to merge all of these various industries together – agriculture, technology and finance. Shiva recounts how, in 2016, India banned all cash and made digital transactions compulsory.

In short order, “90 per cent of poor people lost their savings, their incomes,” she says, as small, local economies evaporated. Meanwhile, the wealthy elites also control the world’s economy via their asset funds.

She continues, “Corporations don’t own themselves anymore. Even the corporations are owned by the billionaires. The same BlackRocks, the same Vanguards control every big company, Coca-Cola to McDonald’s, to Bayer and Monsanto. Look at anything in the world, it’s the billionaire money and their asset management funds.

“Last year, BlackRock increased its wealth from $1 trillion to $7 trillion, which means the billionaires increased their wealth. During the lockdown, they invaded even more deeply into the Amazon and became richer.

“That’s why they’re talking about digitalisation of agriculture – farming without farmers and, worse, food without food. One of the big pushes of Gates and Silicon Valley is into fake food.”

As noted by Shiva, while Big Biotech claims GMOs will save your health and protect the planet, these pesticide-laden plants are in fact doing the complete opposite.

There’s also the issue of social justice. She cites Gandhi, who said that if you’re in doubt about what the right thing to do is, “bring the face of the most vulnerable person to your mind’s eye and do what is good for them.” If you think it will harm them more, don’t do it.

Shiva says, “They deliberately want to get rid of large parts of humanity. First through hunger, then through sickness. …

“ … they want a digital economy, they want a sick economy. Otherwise, you wouldn’t be spending all your time on Big Pharma; you’d spend your time making sure that the smaller farmer doesn’t get destroyed. …

“… on a planetary scale, we are seeing these irresponsible, greedy, indifferent, callous men bring the world, and humanity, to a brink. That’s why we have to act and find creative ways. …

“… All of these tech barons who have taken over the economy, hiding behind the virus, are all jumping into life sciences … Google has a new life sciences division … this will be the final defeat of Mother Nature.

“At a time [when] the world is waking up to the rules of nature and healthy bodies, healthy ecosystems, an eco-healthy planet, they’re still carrying on the colonial franchise of defeating Mother Nature.”

None of these things is coming out of left field. They’ve been carefully planned for many decades. We now see clear evidence that a “great economic reset” is in the works, which will transition everything over to digital currencies.