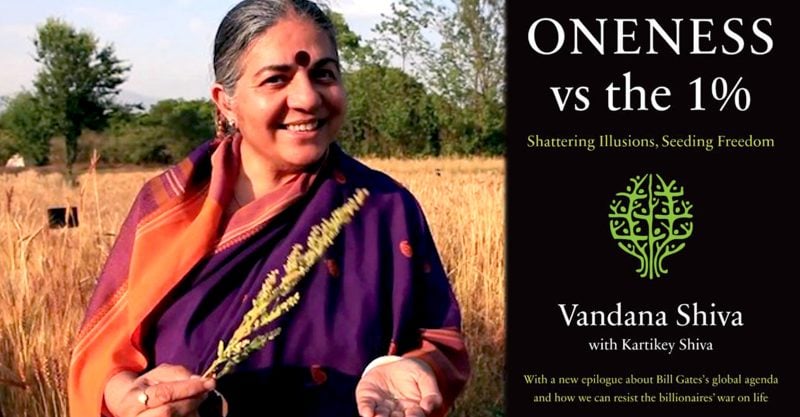 In this interview, social justice and anti-genetically modified organism (GMO) advocate Vandana Shiva, discusses her book, “Oneness vs the 1 Per Cent,” which she co-wrote with her son, in which she argues that the ultra-wealthy elite is responsible for a majority of the environmental, financial and health crises currently facing us.

In reality, it’s really about the 0.001 per cent – the small number of billionaires and centibillionaires who have become ultra-rich over the past 30 years or so. Most of them didn’t exist before globalisation. The 1 per cent is just a useful metaphor for the ruling elite that the publisher thought would be easier to communicate.

One of the key players is, no surprise, Bill Gates, whose wealth and “philanthropic” efforts have garnered him unprecedented influence over agriculture and global health policies that threaten food security and human health.

She says, “I was in Paris for the climate summit and I’ve been doing this UN summit since the Earth summit in 1992. I’ve been doing the Biodiversity Convention, drafting of clauses, including Article 19.1, which basically required biosafety and assessment of GMOs.

“So, I was very surprised that, for the first time, the billionaires were on the stage with the heads of state.”

One of the “solutions” to climate change offered by this billionaire club was geoengineering, which in reality is no solution at all.

As noted by Shiva, if the climate is already changing for the worse, engineering temperatures, deflecting sunlight, dumping iron fillings on the ocean and chemicals in the sky, and creating artificial volcanoes, you’re simply creating additional problems without solving the original one.

At the end of the August 2020 update of the book, she also discusses Covid-19 and how this engineered pandemic has catalysed the transfer of wealth to the rich. While global lockdowns have decimated small businesses and left many to struggle financially, the rich have amassed fantastic profits.

She says, “The 2008 crisis was very clearly about deregulation of the financial economy. It was about collateral, it was about taking securities, bundling up risk, and then the system totally collapsed because it was really trading in fictions. But I’ve been working on the economy, because I started to work on the seed in 1987. …

“… companies … wanted to own and patent life. That’s how my journey on GMO started. But they also wanted to change the trade laws. They wanted to own seed as their creation …

“They wanted an intellectual property treaty in the GATT (General Agreement on Tariffs and Trade). I first heard this in a 1987 [United Nations] meeting …

“That’s when I decided: a) I would save seeds, b) I would keep track of the GATT and the WTO (World Trade Organization) and the antiglobalisation movement grew out of that, and the International Forum on Globalization.

“We shut down WTO in Seattle, which shows the power of the people. We will not allow this lie of seed being Monsanto’s invention.

“I worked with our [Indian] Parliament, I worked with our government to write laws … Article 3(d) of our Patents Act [says] seeds are not inventions. This is what has prevented Monsanto from ripping off Indian farmers even more than they did. They’ve been taken to court now for the illegal collection of ‘technology fees’ …

“Basically, what we have today is this transfer of wealth … Monsanto’s behaviour is actually also Big Tech behaviour. Do they produce anything? No. They only collect rents on digital platforms. They’re rent collectors. …

“I saw the seed issue with Monsanto. I said, ‘Here they are collecting rents from seed, which they didn’t make. Then we won’t let them own it.’ In effect, whether it’s Amazon or Gates, they’re basically rent collectors.

“What they’ve done with this pandemic is literally create a coercive economy, which depends on them and their rent collection.”

The eight-minute video below provides a sobering summary of the massive wealth transfer that occurred in 2020 thanks to pandemic lockdowns, during which small businesses were forced to close while giant multinational companies were allowed to stay open and thereby monopolise the market. The end result is the largest transfer of wealth in modern history.

Shiva goes on to review how India mobilised against Walmart’s encroachment, which threatened to destroy local businesses. The Covid-19 lockdowns, however, have prevented the same kind of mobilisation against the tech and retail giants.

As local businesses around the world have had to close their doors for months on end, Amazon.com’s power has exploded. Amazon is even encroaching on grocery suppliers.

She continues, “I was just reading a paper, that the super wealthy in the US have transferred $50 trillion to themselves [over the past 30 years; the globalisation period]. …

“While they rob you of your job, they’re still extracting [money from] you for that forced software program on digital payments, for software programmes on … digital education.

“Poor Indian children, who could afford a universal education, now cannot afford education because their parents have no smartphones. So, we are seeing an engineered imposition of an economy. A healthy economy grows as an evolution with choices, with justice, with equity. …

“… what is globalisation but deregulation of commerce? It is knocking down every law that was put in place by democratic societies for the protection of the environment, the protection of health, the right to education, the rights of workers. Now that’s what’s being targeted.”