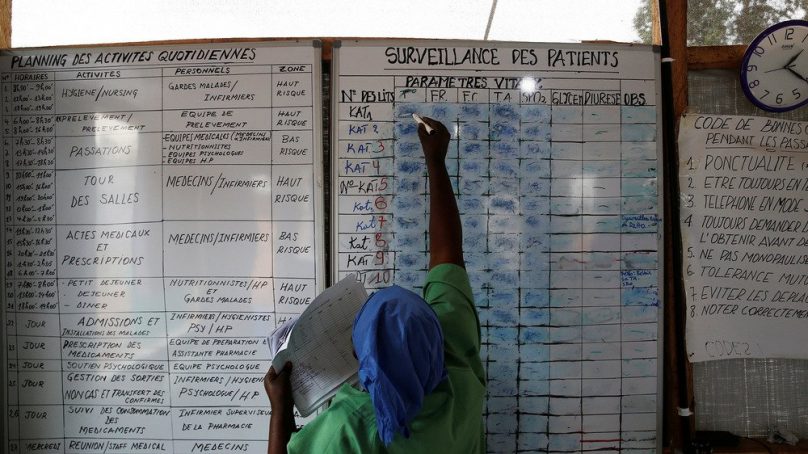 The independent commission tasked to look into claims of sexual abuse and exploitation against World Health Organization workers during the Ebola response in the Democratic Republic of Congo, which released its findings last week, was appointed one month after The New Humanitarian and the Thomson Reuters Foundation revealed those claims.

We expected investigators would want to talk to some of the 73 women we interviewed for our two-part investigative series, so we began planning how we could responsibly assist investigators while upholding the privacy of the women.

As one of the few news outlets committed to holding the aid sector to account for sexual abuse and exploitation, we take issues of confidentiality and consent seriously. That is part of the “contract” we have with victims, survivors and sources.

Our first story, published in September 2020, featured 51 women who alleged that they had been lured into sex-for-work schemes by aid workers. We interviewed another 22 women for a second piece, published in May of this year.

We don’t view these women and girls as “helpless”, as noted in the 35-page report the commission released last week.

And in a country like Congo, where accused perpetrators are allowed to confront their accusers in court, we take the security of victims especially seriously.

As such, we wanted to ensure the women had all the information available to help inform their decisions to talk to investigators. That included knowing what might come of such conversations, and what, if any, precautions would be taken to ensure their privacy and security.

So, in January 2021, three months after the commission was established, we reached out to ask what progress had been made. We received no response, and later learned it took more than six months for investigators to be hired and dispatched to Congo.

In May, we again reached out to the commission, to see if they would tell us how they planned on keeping the women’s details safe and what could come of the investigation – questions we knew the women would ask us before they considered sharing their details with the commission.

The commission did not answer our specific questions. Meanwhile, the Justice Rapid Response, a Geneva- and New York-based organisation that provided the commission with investigators, referred questions back to the commission.

Should we go back to the women and ask if they wanted to share their details, even though we would be unlikely to answer any of their questions, or should we allow them to get on with their lives, as many had said they preferred to do during our interviews?

Two reporters from The New Humanitarian spent weeks in July and August, making telephone calls or visiting houses in Congo’s Ituri and North Kivu provinces to make contact with the women again. After two year-long investigations, the cost and time was not insignificant for a small not-for-profit news outlet.

It was surprising to hear then last week – when the commission released its report on the scandal – Commission Chair Aïchatou Mindaoudou say that The New Humanitarian had refused to cooperate with investigators. The facts speak for themselves.

Mindaoudou also said one of our reporters used a pseudonym when we shared the details of those 11 women. This is also false.

As I wrote in May, it is not our job as journalists to encourage women to share their names and contact details with investigators, even though we strongly believe that exposing these wrongdoings is the only way that systemic changes will occur.

The women who refused to share their details with the commission said they were unconvinced as to why they should share their stories again. Others were worried about their names getting out since many of them had kept the abuse a secret from their families.

Of the 11 women we were able to speak to after the report was released, here is what two said about their conversations with investigators:

Another said she felt “harassed” by investigators, whose contract was paid for by the WHO.

“Honestly, their investigation really started to bother me. I had to continually remember things I wanted to forget. They called me every day. They started to really upset me, forcing me to return to bad memories. Since they were harassing me, I stopped talking to them.”

These reactions give a window into why some of the women were uneasy about sharing their details. So, where do we go from here?

The scale of the alleged abuse is still unknown. The New Humanitarian interviewed 73 women who said they were lured into sex-for-work schemes during the Ebola outbreak between August 2018 and June 2020. The majority accused WHO workers.

Investigators working for the commission said they interviewed 75 people – 63 women and 12 men. It is unclear whether the 11 women whose details were shared by The New Humanitarian were counted in that total, as Mindaoudou said there was no overlap.

The commission, which has been disbanded, said it continues to receive abuse allegations.

Regardless of the precise numbers, the scale of the sex-for-work schemes during the Ebola response appears to be one of the largest scandals in the history of the United Nations outside of UN peacekeeper sexual abuse and exploitation.

The WHO has all but ruled out paying reparations to the women. Most will likely be offered psychological counselling or schooling help for their children, if anything at all.

While we are encouraged that the commission confirmed the findings of our investigations – and some much-needed reforms may arise – we are still concerned that there remains a fundamental misunderstanding about the role journalists should play after uncovering such abuse.

Because of our commitment to keep reporting on these abuses, part of this involves asking follow-up questions long after we publish our stories.

In this case, that meant asking the commission about progress in the investigation, how the investigation was being conducted, the methodology, the number of investigators being deployed, languages spoken; and, critically, what would be done to protect victims.

Asking those questions did not mean we were questioning the independent commission’s competence – we know that many of its members have far more experience in investigating these claims than we do – but we have also reported on botched investigations.

As The New Humanitarian continues to report on sexual abuse and exploitation – several more investigations are already in the pipeline – we hope that commissions of inquiry and investigation teams can treat journalists as useful allies, while recognising that our primary responsibility has to be to the victims and survivors.