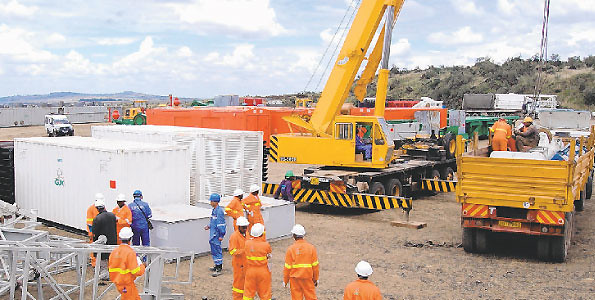 Erratic weather and a burgeoning population that requires food employment is an ever-ticking time bomb. Nakuru, once synonymous with commercial agriculture and industrialisation in Kenya has over the years slipped down the rung, now needs rejigging to breathe new life into the once cleanest town in East Africa.

Endowed with a variety of energy sources and vast potential for agro-based industries, the county government and the Geothermal Development Company (GDC) have struck a deal to exploit the potential to increase food production, speed up industrialisation that will in turn trigger manufacturing with the job creation being the consequence, according to the regional government.

The partnership entered between GDC and the county government of Nakuru is designed to supply farmers with affordable electricity, according to GDC Environment Manager Gabriel Wetang’ula.

“If efficiently harnessed, geothermal heat will deliver energy that will enable farmers and food processors to increase production and improve food security. Energy is a big factor for farmers. This collaboration is aimed at ensuring that they undertake various processes at a cheaper cost,” observes Wetang’ula.

In ideal circumstances, Kenya has the potential to generate more than 10,000 megawatts of power from geothermal sources, which is nearly five times above the current supply of 2,000 megawatts – mainly hydroelectric – against current national demand that oscillates between 1,700 and 1,900 megawatts.

The Kenya Electricity Generating Company (KenGen) estimates at least 500,000 homes and 300,000 business in the expansive Nakuru county and the adjoining regions are get power from the geothermal field located in the heart of the Great Rift Valley.

County Executive Committee Member for Agriculture Immaculate Maina says the partnership between the devolved unit and the state agency is aimed at enabling farmers to improve productivity and carry out viable value addition projects to their produce.

“Reliable and cheap electricity is key to the agricultural sector. To realise this goal, we are seeking to leverage private and public sector partnerships to improve farming and agro-processing. Geothermal energy will be critical, especially in bolstering the twin pillars of manufacturing and food security in the Big Four Agenda.” said Dr Maina.

The project hosted at the floor of the vast Menengai crater in Nakuru County has been fashioned to benefit potential investors and local communities.

Wetang’ula explained that harnessed heat from the crater can be transported for about 10 kilometres through an elaborate reticulation of pipes and pumped into individual farms, private homes and industries.

“Geothermal heated greenhouses, aquaculture ponds, dairy plants and geothermal powered laundries within that radius can negotiate with GDC for facilitation. Farmers and homeowners who use electric powered systems will save up to 50 per cent by switching to a geothermal system” stated the GDC environment manager.

Dr Maina observed that Nakuru town had one of the fastest growth rates in Kenya with may start-up industries.

The collaboration, she said, provides vast opportunities for utilising the geothermal energy directly.

“The use of geothermal fluid in the dairy industry can be considered as a by-product while electricity production is the primary product. The smallest single unit of geothermal powered milk plant can process between 250,000 to 500,000 litres of milk every day,” affirmed Dr Maina.

Bahati constituency, which hosts Menengai crater, he noted, was one of Nakuru’s best tomato producers.

Maina explains that with the adoption of new system of energy, farmers will improve yields by more than 30 per cent while they use geothermal beyond electricity.

GDC is already engaged in a large number of direct use projects, including fish rearing, tomato and capsicum farming among others in Menengai. This follows several successful pilot projects on direct use of geothermal in farming.

Wetang’ula says owing to excellent geothermal resources found at the Menengai caldera both thermal and electrical energy can be harnessed.

Geothermal energy can provide both thermal energy and even electrical power given the excellent resources found at the Menengai caldera.

A feasibility study conducted last year shows that a medium-sized milk processing plant using geothermal energy for milk processing resulted in energy cost reduction of up to 60 per cent.

The geothermal energy will also come in handy in laundry systems. Heated water in the laundry will be used in the washers and dryers.

“The hot water to the washer is mixed with cold one to the required temperature of the clothes to be washed. The electrical heating element in the dryer is replaced with a specially designed fan coil unit which uses geothermally heated water at about 80 degrees centigrade to ensure the clothes are dry,” explains Wetang’ula.

With regard to fish rearing, aquatic ponds are heated to and maintained at 29 degrees centigrade for optimal fish metabolism hence enhanced growth. Here, the geothermally heated water is mixed with cold water to attain the required temperature.

GDC experts stated that maintaining aquatic ponds at a constant temperature of 29 degrees centigrade decreases maturity period of fish from six to four months for tilapia hence profitability is increased by more than 40 per cent.

Wetang’ula points out that at 50 degrees centigrade, heated water is circulated around a greenhouse to control the humidity at night, early morning and during wet seasons of the year when humidity inside greenhouses rises above 85 per cent.

“Greenhouse heating cuts down on the use of fungicides by the reducing humidity. A constant optimum temperature inside the greenhouse results in the enhanced growth rate of plants as well as quality.

Profitability may go up by more than 30 per cent as well as increasing market share of the crops due to the use of green energy,” explains the expert.