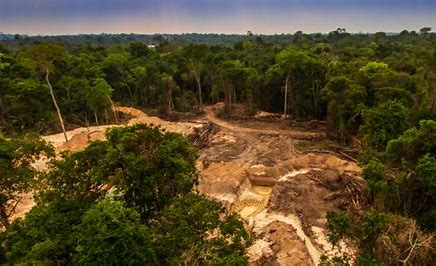 Indigenous territories, long a bulwark against deforestation in the Amazon, are under increasing threat in Brazil, according to an analysis of 36 years’ worth of satellite imagery. The data show that illicit mining operations on Indigenous lands and in other areas formally protected by law have hit a record high in the past few years, under the administration of President Jair Bolsonaro.

The rise underscores fears that his policies and rhetoric are undermining both human rights and environmental protection across the world’s largest rainforest. These operations strip the land of vegetation and pollute waterways with mercury.

The analysis, released in late August, comes as scientists and environmentalists warn of a deteriorating situation in Brazil; Indigenous groups have frequently found themselves in violent clashes with miners since Bolsonaro took office in 2019. They are demanding more protection for their land.

Although Indigenous territories are legally protected, Bolsonaro has openly called for mining and other development in them.

“This is definitely the worst it’s been for Indigenous peoples since the constitution was signed in 1988,” says Glenn Shepard, an anthropologist with the Emílio Goeldi Museum in Belém. Before this, Brazil was ruled by a military dictatorship.

Researchers at MapBiomas, a consortium of academic, business and non-governmental organisations that has been conducting geospatial studies across Brazil, developed algorithms that they used in conjunction with Google Earth Engine to conduct the analysis.

After training the algorithms on images of mining operations – desolate landscapes where forests have been converted into a collection of sand dunes pockmarked by mining ponds — the team ran its analysis on a freely available archive of imagery captured by the US Landsat programme. The team then analysed trends on Indigenous lands and other formally protected areas where mining is not allowed.

Over the past decade, illegal mining incursions – mostly small-scale gold extraction operations – have increased fivefold on Indigenous lands and threefold in other protected areas of Brazil such as parks, the data show.

The findings agree broadly with reports from Brazil’s National Institute for Space Research (INPE) in São José dos Campos, which monitors the country’s forests and has been issuing alerts about mining incursions for several years.

“We kind of knew that this was happening, but to see numbers like this is scary even for us,” says Cesar Diniz, a geologist with the geospatial-analysis company Solved in Belém, Brazil, who led the analysis for MapBiomas.

Aside from being home to their people, Indigenous territories play a part in protecting the Amazon’s biodiversity and the enormous pool of carbon that is locked away in its trees and soils. Numerous studies have found that Indigenous lands, as well as other conservation areas, are effective buffers against tropical deforestation in the Amazon, which is responsible for around eight per cent of global carbon emissions.

Earlier this month, the International Union for Conservation of Nature (IUCN) approved a motion, put forward by Indigenous groups, calling on governments to protect 80 per cent of the Amazon basin by 2025.

Indigenous representatives say they plan to fight for implementation across the Amazon, but the proposal faces a particularly tough sell in Brazil under Bolsonaro, whose pro-business conservative government has scaled back enforcement of existing environmental laws and halted efforts to demarcate new Indigenous territories.

Indigenous groups have also taken their case to the International Criminal Court in The Hague, the Netherlands. On August 9, the Articulation of Indigenous Peoples of Brazil (APIB), which represents Indigenous groups across the country, filed a complaint with the court accusing the Bolsonaro administration of violating human rights.

They claim the violation paved a path for genocide by undermining Indigenous rights, reducing environmental protections and inciting incursions and violence through calls for mining and land development. APIB also made it clear that it’s not just Indigenous rights at stake, drawing a direct link between the protection of their territories and of the globe.

“Defending the traditional territories of Amazonian communities is the best way to save the forest,” says Luiz Eloy Terena, an anthropologist and lawyer from the village of Ipegue who coordinates legal affairs for APIB.

“What is needed is a state commitment on the demarcation and protection of Indigenous lands, which are the last barrier against deforestation and forest degradation.”

During an address to the United Nations General Assembly on September 21, Bolsonaro said he was committed to protecting the Amazon and emphasised that 600,000 Indigenous people live “in freedom” on reserves totalling 1.1 million square kilometres of land, equivalent to 14 per cent of Brazil’s territory.

In the past, Bolsonaro has publicly said that Indigenous peoples have too much land given their sparse population, and at times called for their “integration”. The Bolsonaro administration did not respond to Nature’s requests for comment regarding illegal mining in the Amazon, its Indigenous and environmental policies or the accusations filed with the International Criminal Court.

Brazil earned recognition as a leader in sustainable development during the 2000s. Former President Luiz Inácio ‘Lula’ da Silva and his Workers’ Party put in place policies that helped to curb deforestation in the Amazon by more than 80 per cent between 2004 and 2012.

But the party was dogged by corruption charges that would later land Lula in jail, and its environmental agenda ultimately faltered. In 2012, the increasingly conservative Brazilian Congress weakened a once-vaunted forest-protection law.

With each successive government, funding for the country’s main environmental enforcement agency, the Institute of Environment and Renewable Natural Resources (IBAMA), has decreased. IBAMA had 1,500 enforcement agents in 2012 compared with just 600 today, says Suely Araújo, a political scientist in Brasília who spent nearly three decades working in the Brazilian Congress and led IBAMA from 2016 to 2018.

The rate of deforestation in the Amazon, which includes land converted for mining, agriculture and other development, began rising anew after 2012 and shot up by 44 per cent during Bolsonaro’s first two years in office, according to INPE. Many expect yet another increase when the numbers for 2021 are released later this year.

But the biggest threats are yet to come, says Araújo. The current government is now pushing legislation in Congress – as well as arguments in a case that is pending before Brazil’s Supreme Court – that would make it harder to establish new Indigenous lands and could even allow the government to repossess existing lands.

Other legislation that has been advanced by Bolsonaro’s supporters in Congress would open up Indigenous lands to industrial development, grant amnesty to people who have illegally invaded public lands and gut regulations governing major infrastructure projects such as mines, roads and dams.

“It’s painful,” says Araújo, who decided to forgo retirement and join Brazil’s Climate Observatory, a coalition of activist and academic groups fighting to preserve the country’s social and environmental protections. “This has become my mission.”

For Indigenous tribes, the growing damage to their lands and the rainforest pose an existential threat. More than 6,000 Indigenous people descended on Brasília, the country’s capital, in August and September in protest against Bolsonaro’s policies on land demarcation and the environment.

They also travelled to Marseille, France, for the IUCN’s World Conservation Congress earlier this month to promote their motion to protect the Amazon basin.

“We will not give up,” says José Gregorio Diaz Mirabal, a member of the Wakueni Kurripaco people of Venezuela and the elected leader of the Congress of Indigenous Organizations of the Amazon Basin. “Science supports us, and the world is waking up.”