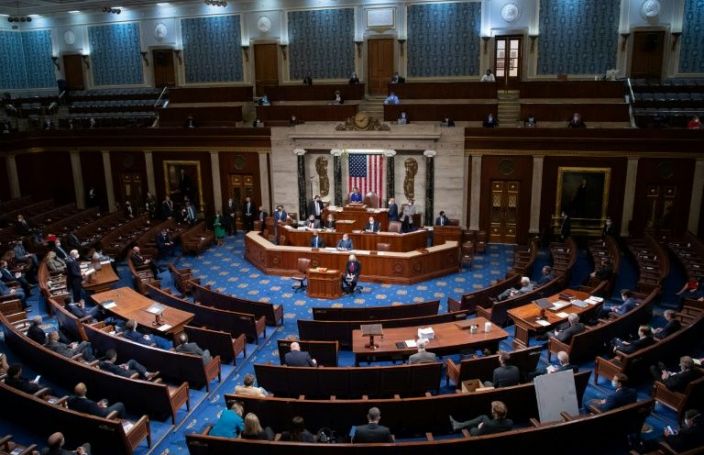 One Republican, Representative Adam Kinzinger of Illinois, joined all Democrats in voting 223-205 to pass the largely symbolic measure. The nonbinding measure does not require Senate approval, and Pence has said he won’t invoke the amendment.

The measure comes as a growing number of Republican lawmakers came out in support of Trump’s impeachment. The third-ranking House Republican, Representative Liz Cheney, Republican Wyoming, said on Tuesday that she supported impeachment, and several Republican senators have signalled openness to removing Trump from office as well.

Top House Republicans, including House Minority Leader Kevin McCarthy, were absent on Tuesday as the chamber debated whether Trump should be removed from office by the 25th Amendment.

In the debate before the measure passed, Democrats outlined the terror they and others experienced last week and expressed a sense of duty in acting to both condemn and oust Trump in the aftermath. Democrats repeatedly noted the poor precedent it would send by not acting after a mob attacked the US Capitol.

House Speaker Nancy Pelosi, Democratic-California, called the past several days a “dark week” but one that made clear every member of Congress’ oath to uphold the country.

“The gleeful desecration of the Capitol and the violence against Congress our staff and our workers are horrors that will forever stain our nation’s history,” Pelosi said in a stern speech on the House floor.

“The president’s actions demonstrate his absolute inability to discharge the most basic and fundamental powers and duties of his office. Therefore, the president must be removed from office immediately. This is a decision we make with the utmost solemnity and prayerfulness, which this crisis requires.”

Representative Jamie Raskin, Democratic-Maryland, highlighted the trauma after the attack on the US Capitol and said his legislation calling on Pence to invoke the 25th Amendment should be an easy vote for both sides.

“I think every member in this body should be able to agree that this president is not meeting the most minimal duties of office. He is not meeting the oath that he swore to uphold and defend the Constitution against all enemies foreign and domestic,” Raskin said. “He is not protecting the Republic against mob insurrection, invasion and hostility.”

Raskin led the measure and was named head impeachment manager in Trump’s pending Senate trial should the House pass an article of impeachment Wednesday. He noted that the attack “desecrated the temple of democracy,” and many more could have died in the attack.

Democrats have sought to oust Trump after pro-Trump rioters stormed the Capitol last Wednesday, leaving at least five people dead. Democrats allege Trump incited the riot through his calls to overturn election results and are pursuing his impeachment for “incitement of insurrection.”

The House was set to debate and vote on a single article of impeachment charging Trump with inciting an insurrection at the Capitol on January 6.

The resolution urges Pence to “convene and mobilise” the Cabinet to “declare what is obvious to a horrified nation” – that Trump is unable to serve as president.

But Pence will not invoke the 25th Amendment, he told Pelosi in a letter Tuesday. The vice president praised Pelosi and other top congressional leaders for their leadership but told them invoking the 25th Amendment would not be “in the best interest of our Nation or consistent with our Constitution.”

Pence acknowledged the pressure to intervene in the counting of presidential election results, writing that he did not “yield to pressure” last week to go beyond his authority in determining the outcome.

But despite Pence’s opposition, House Republicans did not advise members to vote against the resolution, according to a House Republican aide speaking on condition of anonymity.

Republicans largely excused Trump’s conduct last week, saying in speeches on the floor of the House – steps away from where a young woman was shot and killed just days earlier – that the House should be working on more important issues to bring the country together.

Many argued that taking on impeachment was not worth it because Trump is in office for only a few more days, while others asserted that invoking the 25th Amendment would violate the aim of its passage.

Representative Tom McClintock, Republic-California, backed Trump on the House floor. “I’ve read that speech,” McClintock said of Trump’s remarks to supporters on Wednesday before they stormed the US Capitol. “He never suggested rampaging the Capitol and disrupting the Congress. He urged them to, and this is an exact quote, ‘peacefully and patriotically make your voices heard.'”

McClintock also said the 25th Amendment was being used “as a political weapon” and said invoking it right now would set a bad precedent.

“The most important pillars of our governments: stability, the rule of law and the separation of powers will fracture,” McClintock argued. “It won’t affect this president, but it will stalk future presidents from this day forward. For their sake, please don’t do this.”

Representative Jim Jordan, one of the president’s closest allies in the House and who helped lead the charge against his impeachment in 2019, called the actions of Democrats “scary,” explaining that the effort to oust Trump was just part of “cancelling all the people you guys disagree with.”