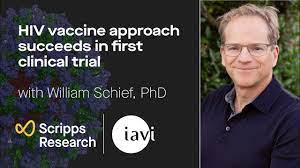 In 2010, William Schief, an immunologist at Scripps and executive director of vaccine design at IAVI’s Neutralizing Antibody Center, working with a group of researchers began to work with a class of broadly neutralising antibodies called VRC01, the first to be discovered by the NIH Vaccine Research Center.

First, they developed an engineered protein nanoparticle that, they reported, could bind to the naïve B cells in human blood samples.

In mouse studies, the nanoparticle could activate these cells and get them to multiply and mutate toward producing VRC01-like antibodies. The new study aimed to find out if the same could happen in people.

It was a big “if.” Only one in every 300,000 or so naive B cells has the potential to develop into cells that produce VRC01 antibodies, Schief says. But in a complex analysis of blood, the team found that 35 of the 36 people who received the vaccine, an “engineered protein nanoparticle,” produced the intended B cell responses.

The findings, which are still undergoing analyses and have not yet been submitted for publication, are a long way off from showing any kind of protective effect against HIV, Schief says – even though plenty of exuberant social media users have made it sound as if an HIV vaccine is suddenly around the corner.

“Somebody sent out a tweet a week ago that indicated that our trial was inducing responses that could protect 97 per cent of the vaccine recipients against HIV,” he says. “That’s completely not true.”

Eventually, Schief says, people might get a succession of shots over weeks to years, beginning with one that starts where the new trial did: interacting with the right naïve B cells, to get the process started. Subsequent shots would guide the B cells to produce fully mature broadly neutralising antibodies.

“We’re trying to take the driver’s seat with the immune system and educate it step by step with a vaccine,” Schief says. The same idea could someday lead to vaccines for Zika, hepatitis C, malaria, and others, including a universal flu vaccine and future coronaviruses.

The work is also an important sign that scientists are on the right track, Corey says, adding to a recent study which found that giving people high levels of broadly neutralizing antibodies can prevent HIV.

“The major breakthrough – and I’ll use the word “breakthrough” – of the Scripps study is that we’re able to give an antigen that got these precursors in high prevalence in people, and they’re not getting deleted,” Corey says. “We have a breakthrough here in getting to the first step.”

In addition to the scientific challenges, HIV vaccine research has long been hindered by a missing sense of urgency. While public and political will, along with major industry investment, pushed the COVID-19 effort to move forward at record speeds, HIV is a disease that disproportionately affects marginalized groups, Esparza says, and pharmaceutical companies have not wanted to invest in expensive HIV trials until scientists established more of the basic science.

“If society really valued an HIV vaccine, we would have done several efficacy trials in parallel, as was done with Covid,” Esparza says. “Expensive, yes. But the cost of the HIV epidemic has been enormous.”

So as the world watches Covid-19 vaccines arrive with unprecedented speed, one hope is that the enthusiasm will provide momentum for the kinds of long-term vaccine development efforts that will be crucial to battling HIV.

The two are already connected. Covid-19 vaccine efforts piggybacked off of the clinical, laboratory, and biostatistical infrastructure created by the HIV Vaccine Trials Network, Corey says. For years, Schief adds, his group has collaborated with Moderna to test mRNA delivery of their proteins in animal models. They plan to work together to rapidly create HIV vaccine candidates for use in human clinical trials.

Given the enthusiasm for Covid-19 vaccines and the new mRNA technology that can produce vaccine variations quickly, this might be the time to generate new interest in the search for HIV vaccines, which will also require the public’s collaboration.

“If we come up with an HIV vaccine,” Schief says, “I would think the world’s experience with the Covid vaccines might make it easier for us to deploy.”