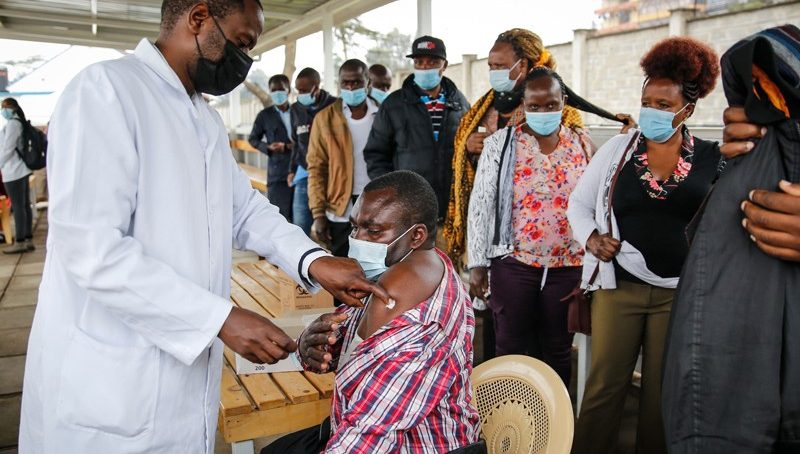 This is in contrast to early models from public-health experts and epidemiologists, which had predicted that up to 70 million Africans would be infected with SARS-CoV-2 by June 2020, with more than three million people dying.

In the early months of the pandemic, more than 70 countries imposed restrictions on the export of medical materials, including the raw materials needed to make diagnostics. It wasn’t until the African Union established the Africa Medical Supplies Platform in June 2020 that the continent was able to start procuring medical supplies at a pace that better met demand.

Now, leaders of African countries are desperately trying to access Covid-19 vaccines. Around 47 per cent of people have been fully vaccinated globally, and many countries in the world are giving a further (booster) dose to their citizens.

Yet Africa is still struggling, it has achieved full coverage in only about seven per cent of eligible people (currently, those who are 18 or older).

This is despite the promises of donors to make two billion vaccine doses available to people living in low- and middle-income countries by the end of 2021 through Covax, an initiative launched in April 2020 by the World Health Organization, Gavi, the Vaccine Alliance and CEPI, the Coalition for Epidemic Preparedness Innovations.

The inequity of the Covid-19 pandemic is reminiscent of the moral catastrophe that occurred during the HIV/Aids pandemic in the mid-1990s, as one of us (JNN) warned in these pages more than a year ago. Before the establishment of programmes such as the US President’s Emergency Plan for AIDS Relief (PEPFAR) and the Global Fund to Fight Aids, Tuberculosis and Malaria, more than 10 million Africans died needlessly because they couldn’t obtain the antiretroviral drugs that were readily available in wealthy nations.

What has happened during the Covid-19 pandemic should be a stark reminder to African leaders of the fragility of international cooperation and multilateralism. But the lessons it holds for Africa go deeper even than this.

Historically, efforts to assist Africa have tended to be siloed. They take a top-down approach, with decision-making coming from a central body outside the continent, not from African institutions and experts.

Efforts have generally focused on short-term crisis management, not on the kinds of sustainable systems, such as manufacturing capability for diagnostics, that could help Africa to take charge of its health security.

Take the 2014-16 Ebola epidemic. The outbreak wasn’t formally classified as a global health emergency until nearly 2,000 cases and nearly 1,000 deaths had already been reported in West Africa. Many more lives might have been saved had there been institutions in Africa, working directly with first responders on the ground, that were empowered to alert the world.

When international aid did arrive from numerous countries, the many organisations involved – with their different messaging and ways of working – heightened people’s confusion about the source of the virus and how best to combat it.

Ultimately, Africa’s dependence on the outside world sustains a lack of confidence in Africa, both within and outside the continent. Certainly, Africa’s successes in the Covid-19 pandemic have not been reported in the mainstream media in a way that could enable the world to learn from them.

Instead, the conversation has focused mainly on whether problems with data collection, demographics, climate or other factors could explain why far fewer cases and deaths have been reported than epidemiologists and others predicted.

Multilateralism will always be crucial to preventing and responding to epidemics and pandemics. But Africa will be able to benefit from the advances it has made in disease surveillance only if its approach to public health is reconfigured towards self-reliance. This could be achieved in five steps.

Invest in health and disease. African leaders must honour their commitments to allocate at least 15 per cent of their annual budgets to the health sector, as they agreed to do in 2001 at a meeting on HIV and other diseases in Abuja. Today, spending on health across the continent ranges from 0.1 per cent to 2 per cent of a nation’s gross domestic product.

Renewing this commitment is especially urgent as the goals articulated in the Agenda 2063 begin to be realized. For instance, the African Continental Free Trade Area agreement, which came into force in January this year, creates a trade area including 1.3 billion people across 55 countries.

Likewise, the African Union’s Protocol on Free Movement of Persons in Africa will enable people to move around the continent without a visa. Both of these steps are crucial to economic development. They also come with major public-health implications.

As rest of world grapples with soaring numbers of Covid infections, Africa praised for coordinated response