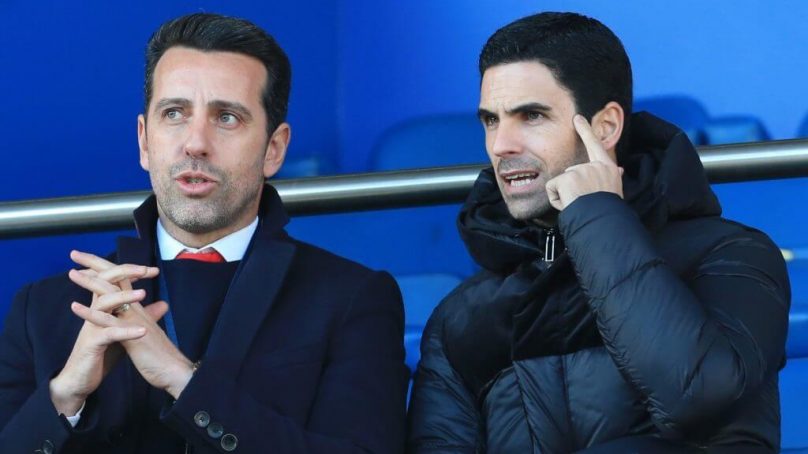 Get rid of Arteta and Edu, a bunch of chickens can manage Arsenal better than the two jokers

I think Arsenal and Arteta don’t understand the word excitement and it’s meaning in the English language. What happened was predictable. It’s sad knowing your team will lose a game of football.

I’m sure there’s an excuse. This time it’s illness and the youth of our squad, tomorrow it will be something else. We had one of the worst attacks in Arsenal history, yet we didn’t want to pay the money (as we usually do) for Tammy Abraham, and we started the game unprepared without a striker.

How many seasons in a row do we do that? At least 10 if you ask me. We should better sell both Aubameyang and Lacazette. Be honest with yourselves, would one of them had made a difference in the game? Not really, because a team desperately needing energy, new faces and a positive vibe arrived miserable, lacking ideas and was beaten again.

It’s just beyond a joke that we had Xhaka as our captain. A player we wanted to sell, who wanted to leave, but we stumbled on the price, is leading the team? Xhaka ain’t worth £20 million in current market, but we didn’t cut our losses on him, because we are counting pennies and we don’t want to spend on players that will actually improve the squad.

We spent £50 million on a centre back that got dominated, even though defence was ironically the one thing we were good at last season. You could see upfront we lacked ideas and a goalscorer. If Maddison is too expensive, Housam Aouar was available for £25 million. But then again if we want Maddison, we should’ve just spent the money on him, rather than White. You honestly think having Holding would’ve been worse?

We do not do things to improve the squad where we most need to, but we follow Arteta’s agenda to one day be like Pep Guardiola’s teams and play out of the back. This is not the way we’ll find ourselves back for contention, because we can’t solve problems the way City do, by throwing endless cash at it.

So many people say, “The transfer window hasn’t finished”. But the season started and we got bullied by a new team in the division. When we find ourselves rock bottom after five games, it doesn’t matter that we bought someone late to try and paper over the cracks.

And part of this comes back to Edu, who allowed the ridiculous contract Aubameyang and Willian are on and now the story with Lacazette is again sad. Why didn’t we sell him early in the window to raise funds? If we wanna keep him, shouldn’t have we addressed his contract situation?

Honestly, a bunch of chickens can manage Arsenal better than it is now. Arteta is a joke manager, but I can’t blame him for the fact he isn’t sacked. If he was managing Chelsea, he would’ve been sacked a year ago.

I honestly don’t think I’ve given anything as much energy and chances as I have to Arsenal, to end up feeling so depressed. I’m honestly happy that I’m travelling Europe and didn’t see the game, because I can’t bear it anymore.

I remember times, where we were scoring five goals against newcomers blowing them away and I can’t believe we’re struggling to create chances, but by far the worst thing is the lack of desire. No fight, no passion, no character.

And some fans have accepted this and think it’s okay and Arteta is not the problem, and it’s just how it is. It’s challenging to support this club and the negativity sadly doesn’t come from me.

The weakness crawls right from the owner down to the pitch. Nobody cares, nobody wants to win, because it doesn’t matter. It’s all about making a nice kit (amazing job Adidas by the way), and as long as the cash flows, nothing matters.

We deserve to lose and it’s sadly the best thing that can happen to us, because maybe at some point someone will realise what a huge mistake, we made with Arteta and the transfer window. But then again, if I could see it and a lot of fans could see it, why does nobody at Arsenal foresee what is so evident?

United spanked Leeds 5:1, that was exciting. I’m seriously afraid that eight placing might be too high for us this season. Why are we throwing another year in the dumpster though? Why sack Arteta at Christmas, when we could’ve given someone with an idea of what to do, the chance to improve us?

The simple answer is they don’t care. Remember that we tried to enter a “Super League”. Arsenal… that can’t beat a newly promoted team. Pathetic and weak. I’m amazed how fast people have forgiven the Kroenkes. It’s extremely sad, but this will inevitably hit our value, and hopefully a point of time comes when Kroenke cuts his losses so that we can actually start to move in a forward direction.

Lastly, I hope Arteta and those players get exactly what they deserve at the Emirates. You have shamed this football club to new lows and if I could, I’d make it extremely visible to them.