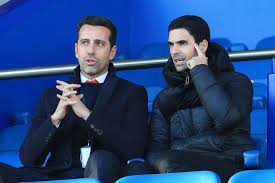 Robert Pires insists Mikel Arteta and Edu remain on the same page as they look to mastermind Arsenal’s resurgence, despite a difficult start to the new season.

The Gunners spent over £150 million ($206 million) during a summer of major upheaval as they attempted to overhaul an ageing squad with young and enthusiastic talent.

Out went the likes of Willian and David Luiz, both ageing stars on bumper contracts, while England hopefuls Ben White and Aaron Ramsdale were among those who arrived to provide competition to their more experienced counterparts.

The new arrivals have struggled to make a positive impact so far, while reports last month claimed Edu and Arteta disagreed over the signing of Ramsdale in particular with the club’s technical director having wanted to sign a more experienced goalkeeper to provide competition for Bernd Leno.

Pires, however, a former teammate of Edu’s at Arsenal, insists the former Brazil international is working perfectly in tandem with Arteta and would never sign a player over the manager’s head.

“They are very close, they have the same ideas on football and like the same player profile,” Pires told L’Equipe.

“Moreover, Edu would never sign a player without Mikel’s agreement. On paper, it is a complementary duo, which can bring a lot to the club.”

Attempting to convey Arsenal’s strategy in the market this summer, meanwhile, Edu said earlier this month: “We signed six players who are under 23, which means a lot in terms of our planning.

“Normally, people like to see just one window, so I have to say it is the bigger picture because we started planning this squad a year ago in terms of consolidating the team and to try to get a better foundation.

“Now, I want to give Mikel Arteta and the board a much better squad.”