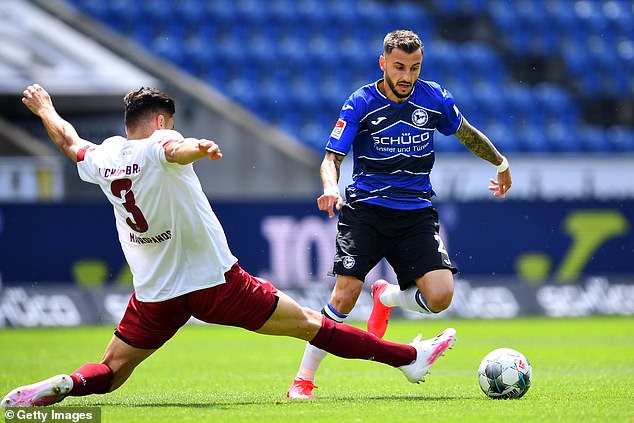 It’s no secret that Willian Saliba and Matteo Guendouzi are making it harder for Mikel Arteta at Arsenal. That’s because the Marseille duo were both deemed not good enough for Arsenal this season and sent on loan to France.

And with both impressing virtually every week, it isn’t a good look for the Gunners boss, no matter what happens in North London results-wise.

But there’s another Arsenal loanee who has been making Arteta look a tad foolish, albeit with less hype than the two French lads. Konstantinos Mavropanos has much less profile than Saliba and Guendouzi but the Greece international is a very good player.

Arteta loaned the big centre-back to Stuttgart and he impressed for the Bundesliga side on Sunday. Mavropanos was on the end of a 3-1 defeat, but the player himself, who has started all five of the German club’s league games, seemed to showcase his abilities nonetheless.

According to WhoScored, the 23-year-old managed 103 touches – more than any other player on the field – and also set up two goalscoring chances which, for a central defender, is nothing to sniff at.

Overall, Mavropanos clocked a rating of 7.44 – the highest of any Stuttgart player. Gabriel Magalhaes is a good player for Arsenal, and Ben White, a £50 million addition, might become one.

Beyond that, the North Londoners, who have conceded nine Premier League goals in five games, aren’t rich with quality centre-backs and the more Mavropanos shines, the more it simply questions Arteta’s judgement.