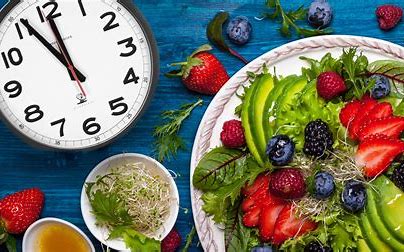 Studies in worms, flies, rodents and monkeys have demonstrated that diets that severely restrict total calorie intake, while providing all the essential nutrients, extend average lifespan. The research shows that in all these organisms, food shortages trigger physiological changes that promote longevity and delay the onset of age-related disease.

Calorie-restricted diets in humans, which involve reducing average calorie intake by around a third, may also extend human lifespan, though hard evidence is currently lacking.

Animal studies have revealed that timing of calorie restriction can have an effect due to the circadian system, which controls daily cycles of physiology, metabolism and behaviours such as eating. This has also been linked to aging.

This led researchers at the University of Texas (UT) Southwestern Medical Centre in Dallas, TX, to investigate whether the timing of meals contributes to the life-extending effects of calorie restriction.

Numerous studies have shown that calorie restriction increases the average lifespan of mice. But most of this research has involved scientists feeding calorie-restricted diets to laboratory mice during the day.

Unlike humans, mice are nocturnal, which means they have evolved to feed at night.

So, for their study, the scientists used automatic feeders to ensure that some of the mice ate only during the night.

To determine whether the timing of meals had an effect on lifespan – independently of calorie restriction and fasting – they split the animals into six groups.

In one group, which served as a control, the animals could eat ad libitum (as much as they wanted, whenever they wanted).

Mice on the calorie-restricted diet that ate only during the day (the inactive phase of their circadian cycle) and fasted for 12 hours overnight lived 959 days. In other words, they lived almost 20% longer than the controls.

But calorie-restricted mice that only ate during their active phase, then fasted for the remaining 12 hours, lived the longest. These animals clocked up an average 1,068 days of lifespan, which was nearly 35 per cent longer than the control animals.

“If these findings hold true in people, we might want to rethink whether we really want that midnight snack,” he adds.

They also found that calorie-restricted diets improved the animals’ regulation of glucose levels and insulin sensitivity, but the improvements were greatest for mice that ate only at night (their active phase).

Calorie restriction slowed down these age-related changes, but mice that only ate a night reaped the greatest benefits.

“Since aging can be considered a progressive ramping up of inflammation, [calorie restriction] is also delaying this age-related increase in inflammation, which is also consistent with delaying the aging process,” said Dr Takahashi.

In particular, they write that sleep disruption in the mice that ate during the day (during their inactive phase) may have contributed to their shorter lifespan. In addition, all the mice in the study were male. The authors write that in females, ovarian hormones may provide some protection against disruptions in circadian rhythms.

As with all research that involves animal models, the study may not translate well to humans. If the findings do apply to humans, which have the opposite active phase to mice, the scientists suggest that eating early in the evening is best for healthy aging.

One day it may even be possible to develop drugs that target circadian genes or the proteins that they make, in order to mimic the anti-aging benefits of eating only during the active phase.

“[W]e are working on this idea and searching for drugs that can enhance circadian alignment,” said Dr Takahashi. “Fingers crossed!”

Eating late at night interferes with the body’s ability to keep blood sugar levels within a healthy range. A recent study found this was particularly true for people with a particular variation of the gene for the melatonin receptor.

Melatonin is a hormone that helps to govern the sleep-wake cycle. As its levels increase in the evening, this not only triggers sleepiness but also impairs insulin secretion. As a result, the body has more difficulty controlling blood sugar levels after meals close to bedtime.

“Since many people opt for carbohydrate-rich snacks in late evenings, such as chips, cookies, candy or popcorn, these snacks are more likely to impair blood sugar control and increase one’s risk for prediabetes and diabetes,” said Mariam Eid, a dietitian and founder of A Happy AOneC, which advises teens and young adults recently diagnosed with prediabetes.