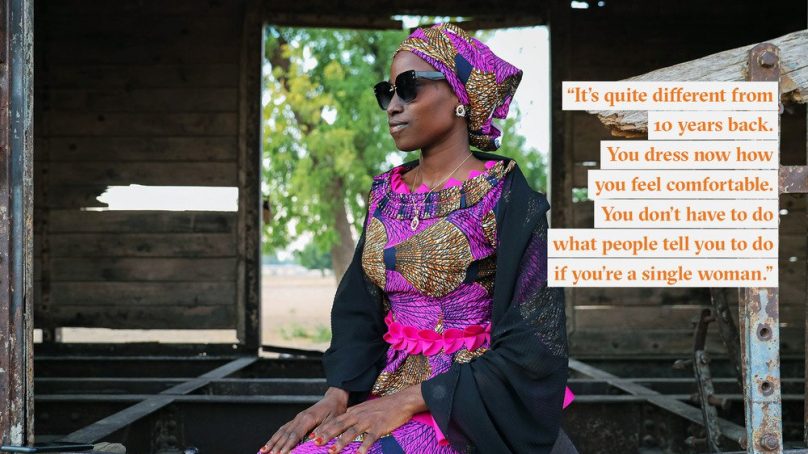 What’s in anyone’s wardrobe is inherently political. That’s especially true in Nigeria’s northeast, a region at the centre of a more-than-decade-long jihadist conflict where how a woman dresses comes under particular scrutiny.

Most Muslim women in the main city of Maiduguri, the birthplace of Boko Haram, believe their religion calls on them to cover their hair, and will wear at least a headscarf known as a hijab, usually paired with a floor-length gown.

How thick or long the hijab, how loose or tight – adorned or plain – the gown, is all wrapped up in cultural perceptions of how a northern woman should dress.

At the extremist end of the dial are the jihadists, who obsess over the control of women and their bodies. Their puritanical ideology holds that women should be largely confined to their homes, and, when out in public, as anonymous as possible.

But a new generation of women in the northeast rejects that hyper-masculine creed. Dressing modestly is their choice, they say – an expression of their religious identity, not a dress code commanded by the jihadists, nor a symbol of their diminishment, as some view the hijab.

The New Humanitarian sat down with four upwardly mobile young women – Aisha Muhammed, Fatima Lawan, Samira Othman and Zainab Sabo – to get their take on the changes underway in gender relations in the northeast, and how that is reflected in fashion.

To capture the feel and flavour, the four were photographed at the city’s derelict railway station by Fati Abubakar, a photojournalist from Maiduguri who has chronicled the impact of the war on her home region.

The station is across the road from a pile of rubble once known as the Markas or “centre”, the former home of Boko Haram when it was still just an extremist sect. It was bulldozed by the army in 2009 after the group launched a short-lived insurrection that marked the beginning of their jihad.

“Around the railway station area, young girls weren’t free to move around [during the days of Boko Haram],” said Zainab, who runs a bakery business. “Boko Haram came up with something new that was very extreme; they were forcing their views on people.”

But here, a decade on, this group of graduates is proud to don their hijabs, and determined to leave a mark on society. By fully owning the headscarf, they have turned it into an item of couture, to be worn with style and panache.

“It’s different from 10 years ago [when Boko Haram was active in Maiduguri]. Then, there would be that stigma that you weren’t dressing correctly,” said Aisha, a local NGO worker. “But now I’m wearing my small little veil, and I feel free!”

These women embrace a global modesty movement that argues fashion need not be revealing or a challenge to one’s faith. They described how social media allows a pan-African sharing of the hijab aesthetic – an empowering affirmation of their identity as Muslim women that transcends Boko Haram’s parochialism.

Although there’s a cultural necessity to “covering”, they argue it’s their choice as Muslim women – despite the social pressure and the much-debated notions of “choice” and autonomy.

Dress code conformity wins Muslim women in the northeast a stake in a bigger battle. Compliance allows them to compete in the job market, and with that comes greater personal independence and financial security – all anathema to the jihadists.

The surge in aid and development money to the northeast has created job openings that women have enthusiastically stepped into. Ultra-conservative gender roles have been further eroded by the economic fallout of the conflict, with everyone in a Maiduguri household now expected to pull their weight.

“You can’t depend on your father or husband as the sole provider; you have to flex your entrepreneurial skills,” said Fatima, an aid worker, referring to the welter of new home-based businesses, from perfume and cosmetics to IT.

“Everybody is doing something,” she nodded. “It’s still very hard [because of the state of the economy], but the number of women that now have skills and are hustling – this is the peak.”

Sitting around a conference table in a private house converted to workshop rooms – one small example of the impact of the development industry – these women see themselves as having far more opportunity than their mothers ever did to impact society.

“Nobody can stop us. We’re moving forward,” said Aisha, caught up in the positivity around the table. “When you’ve tasted freedom – especially the financial independence part – nobody wants to go back to the way it was.”

So far, so middle class. But gender roles are also being tentatively reshaped in the displacement camps, bursting with people who have fled the rural areas where the war is being fought – a conflict that has killed at least 35,000 people and forced more than two million people from their homes.

Women-headed households are common due to the deaths of husbands and sons – or their detention by the security forces. Even when there is a man around, wives receive direct aid payments, which gives them a measure of control over family spending.

Yakura Abakar sews traditional caps to supplement her food ration in the Dalori displacement camp, just outside Maiduguri. She now sends her daughters to school, which had not been the case in her old rural village, close to the town of Dikwa, near the Cameroonian border.

“Women have become very wise, very active,” Abakar told The New Humanitarian. “These young [NGO] women teach us how to do things and some of the attitudes we’ve learnt from them.”

But it’s more a case of incremental change than revolution. Boko Haram’s austere gender authoritarianism has deep roots within traditional society. Whatever softening has taken place at the margins, the gender dynamics mean that men – as around the world – still retain considerable political, economic, and cultural power.

“As a woman, you’re judged all the time,” said Samira, one of the four interviewees. “Men do worse things, the real haram [forbidden] things, but patriarchy says that it’s always the woman who is wrong.”

Yet the women around the table were confident they were asserting a new Islamic vision of feminism – one harking back to the early days of their faith and Quranic ideals of equality. What went unsaid was what happens to women in the northeast who transgress, who ignore the cultural guardrails – and who sets the punishment?

Hauwa Mahdi, an academic who has done key work on the hijab in Nigeria, told The New Humanitarian she remembers walking past a mosque in Maiduguri in the 1980s wearing a hijab, but also jeans. That drew furious shouts from men in the area who accused her of being “disrespectful”.

“You can’t be in a Muslim country and just go out anyhow; you’ll be quickly judged as ill-mannered,” said Aisha, explaining the sensitivity of compliance. “It’s a northern thing. The culture, regardless of the religion, is to cover. Even Christians [in the northeast] are more comfortable covering their bodies.”

Aishatu Kabu quit an international NGO job to start her own women’s empowerment organisation. In a region with the country’s worst social and health indicators for women, freedom to wear what you want is not on her list of priorities.

“What we’re battling for here is against child marriages, the need for girls’ education, reproductive health – we haven’t gone beyond that level yet,” Kabu told The New Humanitarian.

She fears the gender gains made so far are fragile, that a backlash is building among men over their perceived loss of control, which extends from displacement camps – where men are resisting the women-centred focus of aid delivery – to the marital home.

Mahdi, the academic, is also concerned. “If women are not organised to preserve their [empowerment] wins, then, as soon as peace returns, it’s back to the kitchen,” she explained. “That’s how patriarchy operates.”

Yet Zainab, the baker, insists her generation of women is “woke” and different.

“I’ll tell my daughter: ‘Know your rights, love yourself, and always have your own money!’”

Besides military attacks, Russia is also waging ferocious cyberattacks that ramp up the chaos and destruction in Ukraine