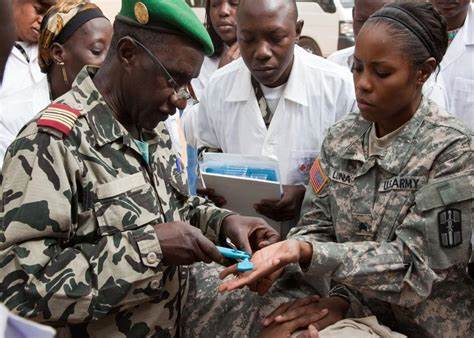 Boulkessi, once a large and thriving village in central Mali, is deserted – its orange, mud-brick houses now standing empty. Malian soldiers are the only people who live there, entrenched in a fortress of sandbags on the outskirts of the village.

Sent to defend Boulkessi from jihadist insurgents, they are the main reasons the village has been abandoned, according to former residents.

The Malian army is accused of killing more civilians last year than the jihadist insurgents it is supposed to be battling. The EU and France continue to provide the army with training and equipment support worth millions of euros each year. The EU has no systematic vetting mechanism to check whether the units it is training have committed rights violations.

The New Humanitarian was able to trace an elite unit that had received EU training, but also had a history of abuse against civilians.

The jihadists are expanding their area of control, with recruitment driven in part by anger over the rights violations committed by the army.

Since 2018, the European-backed army has been responsible for the deaths of 153 civilians within just a 100-kilometre radius of the Boulkessi base, according to data collected by the Armed Conflict Location & Event Data Project (ACLED), a conflict monitoring group.

Tidiani Diallo, 18, was in Boulkessi on May 19, 2018 when Malian soldiers executed 12 villagers in revenge for the death of one of their comrades, an event documented by the UN. He remembers the soldiers saying: “We told you that if one of ours dies, we’ll kill 20 of you. You were lucky it was only 12 this time.”

Diallo now lives in a half-finished house in Sevaré, 200 kilometres from Boulkessi. He misses his home, but feels it is still far too dangerous to return to a region where the civilian population is caught between the jihadists, community self-defence groups, and the army.

More than 10,000 people have been killed in the violence in Mali since the conflict began in 2012, according to ACLED, with over 350,000 people currently displaced.

Last year, the Malian armed forces (Forces Armées Maliennes or FAMa) killed more civilians than the jihadists, according to ACLED project. Earlier this month, the UN’s expert on human rights in Mali condemned FAMa’s violence and urged the authorities to “give top priority to addressing the troubling issue of impunity”.

Yet, despite the slew of well-documented cases of rights violations by FAMa, European governments still provide them with military training, equipment and logistical support worth millions of euros each year.

No mechanisms appear to be in place to prevent EU-funded training and equipment from contributing to rights abuses, a nine-month investigation by The New Humanitarian has found – based on interviews with Malian and EU officials, military personnel and human rights advocates; as well as a review of documents and the tracking of military units on social media.

Soldiers on training courses appear not to be vetted for any previous involvement in civilian abuses; there’s no systematic tracking of whether trainees and their units go on to commit atrocities after graduation or if the military equipment supplied by European governments is used to violate international law.

The net result, analysts argue, is that Mali has an army – trained and financed by the EU and France – whose extrajudicial killings and human rights violations are driving the same radicalisation and extremism it is supposed to be combatting.

In response to questions from The New Humanitarian, Brigadier General Fernando Luis Gracia Herreiz, then-commander of the European Training Mission to Mali (EUTM), which conducts all of FAMa’s training for the EU – said in April that putting a human rights monitoring system in place was not part of its mandate.

Neither EUTM nor the French army responded to specific questions regarding the apparent lack of vetting and post-training monitoring of FAMa soldiers.

“These individuals are selected by FAMa,” an EUTM spokesperson said in an email. “We receive the unit to train, and we ‘name’ it according to EUTM order (normally first platoon of 2020, or second company of 2020). We do not know what platoon, or company, or from what regiment is attending this course, this information is handled by FAMa.”

In a statement, the EUTM said courses on humanitarian law were part of its curriculum, “exactly to prevent… trained soldiers [being] engaged in cases of human rights violations”. But the EUTM is not liable for the behaviour of FAMa personnel once deployed, as “we cannot accompany the troops into operation[s]”, it added.

The French Ministry of Armed Forces said it also condemns all rights abuses. In a statement, the ministry noted such conduct “risks playing into the hands of terrorists”, but it also reiterated its trust in its “Malian brothers in arms and the military command to apply the law of armed conflicts”.

A resolution by the EU parliament last year called for all European military training missions to be “redefined”. That would include the establishment of a human rights monitoring system, and for EU instructors to supervise “on the ground” soldiers who have completed training. But the EUTM is not bound by the resolution.

“Why isn’t a human rights monitoring system included in this EUTM?” Özlem Demirel, an EU parliamentarian with The Left, a German political party, asked in an interview with The New Humanitarian. “How could it be that it is not included?”

A human rights “due diligence” risk-assessment is required by the UN prior to providing any training support to non-UN military forces. And, as an example of best practice, the Leahy Law in the United States, forbids any military assistance going to a foreign military where there is credible information of rights abuse.