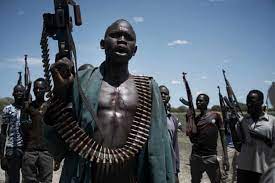 South Sudan is experiencing its worst food crisis since independence as seasonal flooding sets in amid an economic downturn and renewed conflict that has spiked despite a peace agreement and the formation of a unity government.

Efforts to distribute food have been complicated by funding gaps in the humanitarian response, and by the repeated looting of food convoys and warehouses. Attacks against aid workers have also risen, and government officials have created new administrative hurdles for some agencies.

“At a high level of government, the peace dividend is being enjoyed, but in the communities, people are more frustrated than ever,” said Abraham Kuol Nyoun, a political scientist at the University of Juba in South Sudan. “This peace, as it is, cannot put food on the table.”

Some 7.2 million people are currently enduring severe hunger across South Sudan – the highest number since the country of roughly 12 million broke from Sudan in 2011. Of those, tens of thousands are thought to be in famine. The government has downplayed the crisis.

Though humanitarian agencies have managed to reach most of those in greatest need this year, aid officials said efforts to raise the alarm at an international level have failed to garner extra resources, leading to ration cuts for those displaced people and refugees who are considered less needy.

“[We tried to] say that this is a significant deterioration, [but] the advocacy hasn’t hit home on the international stage,” said a Juba-based senior aid official who asked not to be named given how sensitive the issue is with the government. “There is a feeling outside of South Sudan that the country is always bad.”

Some had hoped the humanitarian situation would improve when President Salva Kiir formed a unity government last year with opposition leader Riek Machar – now the vice-president – following a power-sharing deal signed in September 2018.

“I have grown crops, but I can’t even go and weed them because I fear being killed.”

That agreement was the second between Kiir and Machar since a civil war broke out in 2013, costing 400,000 lives and displacing millions of people in the world’s newest country.

While the two men have stopped open political fighting, key parts of the deal have not been implemented, and violence – much of it connected to political and military elites in Juba – has escalated, heightening the food crisis and complicating relief efforts.

As local officials have been appointed by the new government, aid agencies have also faced increased administrative impediments, which were already common in South Sudan.

“We are spending half our time dealing with requests and permissions,” said the senior aid official, who also mentioned ad hoc fees being levied to register projects. “It’s happening across the country.”

South Sudan often experiences high levels of food insecurity, which peak in severity between May and July during the lean season, when families have depleted most of their harvest and are highly dependent on food assistance, which is almost entirely provided by aid agencies.

Since 2015, there have been 37 pockets of famine detected in the country, one famine declaration, and a recent “famine likely” announcement – issued because mortality data was lacking but the available information pointed towards famine.

This year’s hunger crisis has several causes. Flooding, which affected over a million people in 2020, has eroded coping mechanisms and proved hard to recover from. Further rains have fallen in recent weeks, impacting some 90,000 people.

“Floods have [destroyed] all my sorghum and there will be nothing for me and the children for a very long time,” farmer Deng Aleng told The New Humanitarian earlier this month from the northern administrative area of Ruweng.

Financial problems – exacerbated by the Covid-19 pandemic – have made matters worse. South Sudan’s economy is expected to contract by 4.1 per cent in 2021, according to the World Bank, while currency depreciation and soaring food prices have eroded people’s purchasing power.

Violence – the main cause of famine conditions since 2015 – has also continued at a level some experts say resembles a full-scale national armed conflict. Tens of thousands of people have been displaced, farming has been disrupted, and the mobility of pastoralists restricted.