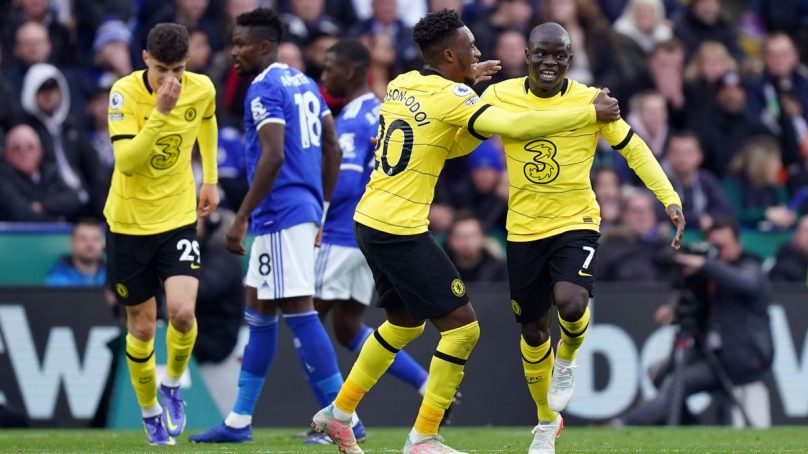 Chelsea continued their pursuit of a first Premier League title since 2017 with a comfortable 3-0 away victory over Brendan Rodgers’ Leicester City.

N’golo Kante scored a beauty as his side scored three and had three goals disallowed which gave the European Champions a fourth win on the bounce on the road.

Against Arsenal they had to come back from conceding two goals in the first half and had to do so again against Thomas Tuchel’s side.

Antonio Rudiger put the visitors in front early on with a glancing header as the Foxes failed to defend a corner, with Kante making it 2-0 with a beautiful solo goal.

The Foxes improved in the second half but could never seriously test Edouard Mendy in the Chelsea goal.

And, late on in the second half, Christian Pulisic came off the bench and added icing on to the cake with his first goal since August, and make the score line a more accurate reflection of the match.

This could have been a potential banana skin for Tuchel’s side given the last time they faced Leicester; they were beaten in the FA Cup final. However, given that the hosts were missing the goal scorer from that day Youri Tielemans, and the fact that the hosts were in superb form, a win seemed inevitable from the first minute and proved to be that way.

For the hosts though things aren’t looking great, they sit 12th on the table after that loss and despite distancing himself from the role, Rodgers is still being linked to Manchester United.

For now, though and as long as he is in the dugout at the King Power, Rodgers needs to find a way to help his side rediscover the form that helped them to back-to-back fifth placed finishes.

Back at his old club, Ben Chilwell was a constant threat all afternoon for the visitors and could have scored.

“That is a wonderful chance for Chilwell,” Dean Ashton said on talkSPORT whilst commentating on the match. The form he’s in I would have expected at least Kasper Schmeichel to be tested. He doesn’t need to lash the ball like that. Rather than just placing it in the corner, he’s trying to trip the back of the net open, he gets too much on it and it’s off the top of the crossbar.

Despite missing the chance, the England left-back made amends by taking the corner that led to Rudiger’s goal. Ashton though was critical of the Leicester defending and likened it to the Arsenal game where they virtually conceded the same goal.

“It’s Groundhog Day if you support Leicester – they’ve conceded early, it’s Arsenal all over again. If you can’t defend from set plays and you give Rudiger a free header, you’ve got no chance. It’s the fourth successive game Leicester have conceded the first goal, and it’s a big problem for them. It’s something they have to get right.”

With no international break now until March next year, games will be coming thick and fast for both sides. Tuchel will hope his team can continue this imperious form but Rodgers will hope he can fix these errors that are costing Leicester.