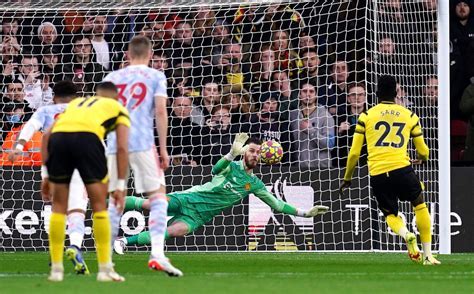 United looked lethargic and lacked any sort of control in the first half. Up the other end, Watford were clinical enough as they went 2-0 up, but they should have had more.

After the break, United had mixed fortunes as substitute Donny van de Beek had an instant impact. However, Harry Maguire’s red card for two bookable offences saw his struggles continue.

The result means that the Red Devils have lost seven of their past 13 games. Midfielder Van de Beek offered a glimmer of hope, but many fans will suggest he should have been offered a chance to make such an impact long before this game.

United got off to a bad start when giving away a penalty after eight minutes, which was a sign of things to come. Kiko scored the rebound after De Gea saved, only for VAR to order a retake.

De Gea saved again, but Watford did not let their dominance slip. Indeed, the visitors, who lacked cohesion and control again, did not look like getting hold of the game and snatching the lead.

Instead, the hosts went 1-0 up. Emmanuel Dennis brought the ball down on the edge of the area under little pressure and slid the ball into Joshua King.

The striker enjoyed similar freedom, but did not need the time he would have been afforded as he struck a fine first-time finish.

Marcus Rashford had Man United’s best first-half chance, but Ben Foster saved his volley well. Nevertheless, Watford were unmoved and Ismaila Sarr then made it 2-0.

After the ball flicked off Jadon Sancho and Kiko picked up the loose ball, his cross found Sarr, who – like King – had freedom in the box. This time, the Watford man composed himself before firing the ball into the bottom corner.

Who’s number one? Counting down the top five saves of the season by Premier League keepers

Solskjaer took action at the break, bringing Van de Beek and Anthony Martial on for Scott McTominay and Rashford.

Van de Beek, who United fans have called on for so long to get more game time, had an instant impact. Cristiano Ronaldo headed Sancho’s cross back to the Dutch midfielder, who nodded into an empty net.

United kept coming and Van de Beek continued to play a central role. He found Ronaldo who had a shot saved by De Gea, while Bruno Fernandes dragged a shot wide.

Nemanja Matic also missed an effort but United then went down to 10 men when Maguire received red.

After picking up a yellow, he had the ball nicked off him by Tom Cleverley and brought the Watford man down, a second bookable offence in referee Jon Moss’ eyes.

But that did not change the visitors’ outlook as they looked to salvage something from the match. Ronaldo had the ball in the net but was offside, before Fernandes fired over the bar.

However, Watford compounded United’s misery in stoppage time. Joao Pedro made it 3-1, his low shot going through De Gea’s legs, before Emmanuel Dennis completed what turned out to be a rout.

Solskjaer has continued to insist recently that he still has the faith of his club’s board, but that support will now be questioned even more.

For Watford, Claudio Ranieri’s men will have relished this return from the international break and will now be full of confidence.