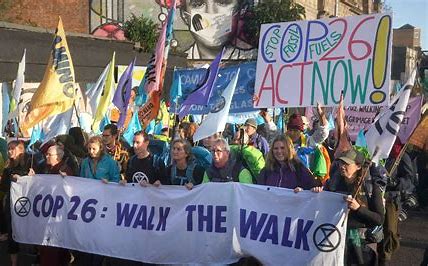 Government ministers at the 26th United Nations Climate Change Conference of the Parties (COP26) have reached a deal on further steps to reduce greenhouse-gas emissions after discussions overran by 24 hours.

On 13 November, representatives from nearly 200 countries agreed the final text of the deal, which pledges further action to curb emissions, more frequent updates on progress and additional funding for low- and middle-income countries.

Researchers have expressed relief that the meeting did produce an agreement, but some left COP26 dissatisfied at the lack of stronger commitments to reduce emissions, and failure to agree “loss and damage” finance for countries that are vulnerable to climate change.

“COP26 has closed the gap, but it has not solved the problem,” says Niklas Hoehne, a climate researcher at Wageningen University in the Netherlands. Countries now need to come forward with more ambitious pledges to tackle climate change, he adds.

The final 11-page document, called the Glasgow Climate Pact, says that greenhouse-gas emissions must be reduced and carbon dioxide emissions must fall by 45 per cent from 2010 levels by 2030 for global warming to be maintained at 1.5 °C above pre-industrial levels. It notes that, under existing emissions-reduction pledges, emissions will be nearly 14 pe cent higher by 2030 than in 2010.

Countries acknowledged the need to reduce emissions faster, and also agreed to report on progress annually. For the first time in a COP text, nations agreed to begin reducing coal-fired power (without carbon capture) and to start to eliminate subsidies on other fossil fuels.

However, following objections from China and India, a promise in earlier drafts of the text to “phase out” coal was changed to “phase down”.

India’s climate and environment minister Bhupender Yadav told the conference that richer nations should not expect poorer countries to stop subsidising fossil fuels such as gas. The lowest-income households rely on these to keep energy costs down, he said.

The deal also includes commitments from some countries on ending deforestation, reducing methane emissions and a pledge from the financial sector to move trillions of dollars of investments into companies that are committed to net-zero emissions.

However, modelling suggests that the promises will still not be enough to limit global warming to 2 °C above pre-industrial levels the goal stated in the 2015 Paris climate agreement.

If countries meet their 2030 targets, global temperatures will still rise 2.4 °C above pre-industrial levels by 2100, according to an analysis by Hoehne and colleagues that was published on the website Climate Action Tracker during the first week of COP26.

“We are well aware that ambitions have fallen short of the commitments made in Paris,” COP26 president Alok Sharma told the conference in a speech shortly before the negotiations concluded. “We have kept 1.5 degrees alive. But its pulse is weak, and it will only survive if we keep our promises and translate commitments into rapid action.”

Charlie Gardner, a conservation biologist at the University of Kent in Canterbury, UK, who joined demonstrations outside the conference with the protest group Scientist Rebellion, says more radical action is needed, such as ending fossil-fuel production more quickly and transitioning economies away from constant growth.

The issue of climate finance – funding from wealthy nations to help low- and middle-income countries transition away from fossil fuels – was heavily discussed during the meeting.

There was considerable anger over the failure by high-income nations to meet an earlier pledge to provide $100 billion in climate finance annually from 2020.

“The message coming out of this COP is every country for themselves,” says Sara Jane Ahmed, a climate-finance researcher who advises the finance ministers of the V20, a group of 20 countries that are vulnerable to climate change.

However, the Glasgow Climate Pact includes a commitment to double ‘adaptation finance’ – funding to help the lowest-income countries improve climate resilience – to $40 billion by 2025. Adaptation finance is around one-quarter of the $80-billion climate finance currently available every year to low- and middle-income countries.

The deal also commits to continue work on a definition of climate finance that would be acceptable to all countries. This is essential if trust between developed and developing nations is to be regained, says Clare Shakya of the International Institute for Environment and Development, a London-based think tank.