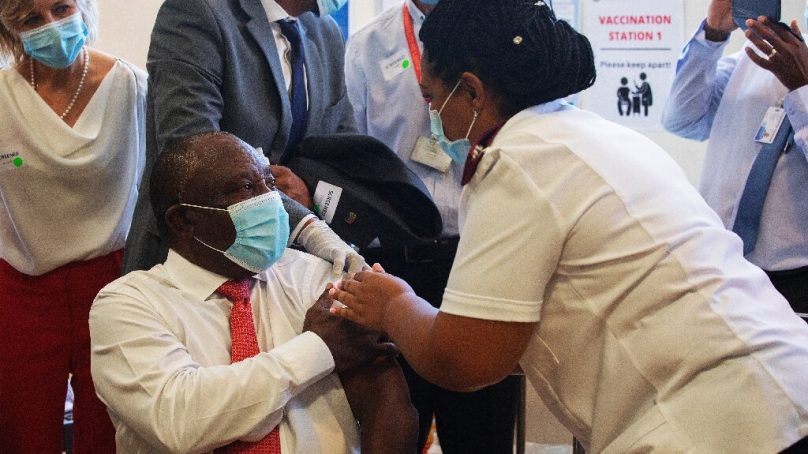 Most African countries are almost entirely reliant on Covax – the initiative backed by the World Health Organisation (WHO), the vaccine alliance Gavi and the Coalition for Epidemic Preparedness Innovations that offers vaccines cheaply to developing countries. Covax began distributing vaccines to countries such as Ghana and the Ivory Coast last month.

But the programme will only cover 20 per cent of the populations of its members by year-end. Of the 304 million doses administered worldwide so far, fewer than 0.2 per cent have been in Sub-Saharan Africa, home to 14 per cent of the world’s population.

Richer nations are beginning to acknowledge that poorer countries need better access to vaccines. In an interview with the Financial Times in February, French President Emmanuel Macron called the vaccine gap “an unprecedented acceleration of global inequality.”

At their meeting last month, leaders of the G7 countries pledged $7.5 billion to Covax and also called on countries to donate surplus supplies.

Granted, African governments haven’t helped themselves. Few made attempts to secure supplies directly from pharmaceutical companies, with South Africa, which has a wealth of medical expertise and is the site of five coronavirus vaccine trials, only signing deals this year.

“The bulk of the blame should be placed on African leaders for being somewhat nonchalant and non-proactive,” said Ifeoluwapu Asekun-Olarinmoye, an epidemiologist at Nigeria’s Babcock University.

That’s in part because the official Covid-related death toll across Africa is just under 106,000 with almost four million cases reported, small compared to the rest of the world. But testing has been sparse and many infections and deaths have gone unrecorded.

At times over the last few months hospitals from Cape Town to Harare and Lagos have groaned under the strain. Doctors and oxygen have been in short supply and people have taken to social media to search for beds for their afflicted relatives.

With vaccines beginning to arrive, other challenges are coming to the fore. The continent is plagued by poor health infrastructure, a shortage of trained personnel and inadequate data on the people who need to be vaccinated.

Take Nigeria, for instance. Africa’s most populous nation has about 214 million people, most living in areas that are hard to reach. Fewer than a third of the country’s 195,000-kilometre road network is paved. Power supply, even in the biggest cities is unreliable, making it a challenge to keep vaccines refrigerated and a 15-year gap since the last census means the government has little idea about the whereabouts of vulnerable groups like the elderly. The same applies to many African countries.

In countries like Tanzania virus denial is holding back attempts to immunise the population. President John Magufuli has declared his country Covid-free even as people continue to die from it. Vaccine scepticism runs high in some countries, with 15 high school students taken to hospital in south-west Cameroon last month after leaping from the second floor to escape what they thought was a team of medics arriving to vaccinate them.

Meanwhile some shots, like Russia’s Sputnik V and vaccines from China’s CanSino Biologics Inc., have sparked concern. They use a cold germ to carry the genetic material of the Covid virus into patients’ cells to trigger an immune response.

A trial in South Africa of an HIV vaccine using the same vector more than a decade ago was tied to an increase in HIV infections. South Africa has the world’s biggest AIDS epidemic and many of its neighbours have similar infection rates.

Even when vaccines are suitable, some African countries can’t afford shots outside the Covax system. Since African countries didn’t contribute to the development of the shots and didn’t pre-order, they don’t get the discounts offered to richer countries.

In January, Anban Pillay, a deputy director-general in South Africa’s Department of Health, said the country would pay $5.25 per dose of AstraZeneca’s shot compared with about $3 the European Union was paying.

All that has meant a very slow pace of vaccination. South Africa, the continent’s most developed country, is inoculating at most about 11,000 people a day with the single-dose Johnson & Johnson shot, a pace that would take a decade to cover the 40 million people the government wants to vaccinate. Most vaccines available to African nations require two shots.

If a double-dose regime is followed and 780 million Africans inoculated over 12 months to attain herd immunity, there would need to be 7 million vaccinations a day, according to Ernest Darkoh, founder of Cape Town-based Broadreach Group, which works with governments on healthcare.

“The whole world needs to walk this journey together,” said Mmboneni Muofhe, a deputy director general at South Africa’s Department of Science and Technology. “We are going to find ourselves sitting with a variant that defies all the vaccines. We are sitting on a ticking time bomb.”