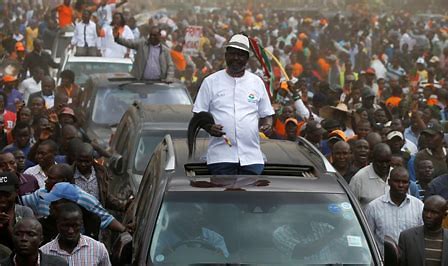 Kenyans will vote in August in their seventh presidential elections since the introduction of multiparty politics in 1991. The competitiveness of the elections, and uncertainty over the outcome, distinguishes Kenya from many of its neighbours.

President Uhuru Kenyatta is retiring, following the completion of his constitutionally limited two terms in office. This, too, makes the Kenyan elections noteworthy, given the recent trend of African leaders sidestepping term limits as a means of extending their time in power – to the detriment of stability. Rather, Kenya has a tradition of transfers of power even between candidates from opposing parties.

Still, elections in Kenya remain a period of high tension. Kenyans recall the large-scale violence that erupted after the 2007 elections when supporters of Raila Odinga, and his then ally, William Ruto fought over what Odinga’s side saw as an effort by President Mwai Kibaki and his top lieutenants including (current President) Uhuru Kenyatta, to “steal” the election.

The Rift Valley was engulfed in deadly violence pitting the Luo and Kalenjin communities – respectively loyal to Odinga and Ruto – against Kenya’s largest ethnic community, the Kikuyu, from which Kibaki and Kenyatta hail. Over 1,120 people were killed and 600,000 uprooted. Many remain displaced today.

Kenya has a tradition of transfers of power between candidates from opposing parties.

The 2013 and 2017 polls, tightly contested between Odinga and Kenyatta (and his running mate, Ruto), were marred by electoral fraud. The Supreme Court required a rerunning of the 2017 contest due to the irregularities.

This recent history has raised questions about Kenya’s ability to hold free and fair elections – and the 2022 elections will provide a benchmark for how much progress has been made.

The potential for violence remains high according to a report by the independent National Cohesion and Integration Commission, due to pre-existing conflicts and weak institutions. Some young people have told the Commission that they are being paid by politicians to intimidate rivals and disrupt their campaigns.

A report by the Mozilla Foundation warns that hate speech, misinformation and disinformation are widespread (though not by the candidates themselves), with some manipulated hashtags getting over 20 million views.

A quintessential feature of Kenyan politics is that the same pool of politicians tends to dominate the political process, though they may be in different camps depending on the election – sometimes friends, sometimes bitter rivals.

The whipping up of ethnic animosities, especially around land in the Rift Valley, is another feature of Kenyan politics. This is where some of Kenya’s most productive lands, previously reserved for European settlers, are located.

The frontrunners of the upcoming polls embody many of these dynamics. Raila Odinga (77) and William Ruto (55) have worked together as senior government officers and, at times, as vigorous opponents in every election since the early 1990s. They were on opposite sides under President Daniel arap Moi, the same side against Mwai Kibaki in the infamous 2007 poll that ended in catastrophic violence in the Rift Valley, and are on opposite sides again this time around.

The enmity between them has made this election more about personalities than policies. Odinga is making his fifth and likely final run for office. He is currently viewed as a an “establishment candidate” since President Kenyatta is backing his candidacy following their famous “handshake” reconciliation on March 9, 2018.

Odinga’s Azimio la Umoja Alliance (“Resolution for Unity” in Swahili) is a coalition of seven major political parties, three of which contested previous elections as bitter adversaries. These include the Kenya African National Unity (Kanu) that ruled Kenya during the one-party era until 2002 and once detained Odinga, the governing Jubilee Party, National Rainbow Coalition (Narc-Kenya), and its rival from 2007 elections, the Orange Democratic Movement (ODM), then led by Odinga and Ruto.

The Azimio La Umoja Alliance is organised around older-generation politicians dating back to the 1990s and a populist programme, Inawezekana (It can be done), that includes extensive social welfare initiatives: universal healthcare, Inua Jamii, Pesa Mfokoni (economic empowerment), which is a direct cash transfer of 6,000 shillings ($50) per month to needy families; and Azimio la Kina Mama (women’s economic and social welfare), which is universal financing for women-led small businesses.

William Ruto had a falling out with Kenyatta since 2018, ending a two decades-old partnership dubbed “Uhuruto.” He presents himself as an “insurgent candidate,” deriding the Odinga ticket as a continuation of the dynastic politics of the Odinga and Kenyatta families that have loomed large over Kenya since independence.

Jaramogi Oginga Odinga (Raila’s father) and Jomo Kenyatta (Uhuru’s father) were comrades who led Kenya to independence and were considered co-founding fathers until they fell out in the mid-60s over Jaramogi’s demand for multiparty politics. Ruto has framed his election around the slogan of Hustler Nation (aimed at those who are at the bottom of the social-economic pyramid) and has depicted the elections as a struggle between “hustlers” and “dynasties.”

William Ruto’s Kenya Kwanza (Kenya First) Alliance assembles nine parties that have also undergone multiple transformations since the Moi era. Some of them – like Ruto himself – were either on Odinga’s side or with Kenyatta in previous elections.

It, too, promises an extensive and populist social welfare programme targeted particularly at the youth. Key pledges include a so-called “hustler fund” for women’s cooperatives and Kenyan women abroad, workers compensation, universal healthcare and Pesa Kwa Vijana (youth fund), a programme that targets “wealthy dynasties” for wealth and land redistribution. Ruto has also pledged to enact a policy requiring spousal consent in all land transactions to protect women and children from dispossession of family land.