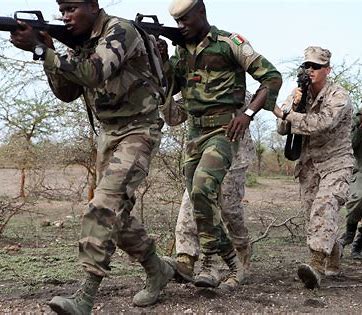 The Islamic State terrorist organisation has been decimated in Iraq and Syria in recent years and is now seeking to expand operations in Africa, taking aim at some of the continent’s most fragile regions.

African countries now account for nearly half of all deaths at the hands of the Islamic State (IS) and its affiliates worldwide, according to Nasser Bourita, Morocco’s minister of foreign affairs.

IS first arrived in the Sahel in 2015. Since then, terrorist groups under the IS umbrella have expanded their range from the desert interior to the Atlantic Coast. The groups have killed or kidnapped thousands of civilians and attacked military bases across the region.

If they gain a foothold on the Atlantic Coast, they pose a risk to shipping by driving more acts of piracy in the Gulf of Guinea in West Africa, Bourita told the recent meeting of the Global Coalition to Defeat ISIS when it met in Marrakesh.

“We remain lucid on the state of the IS threat, which has not diminished,” Bourita told the conference.

Extremist attacks in the Sahel rose 43 pr cent between 2018 and 2021, according to the US Bureau of Counterterrorism.

Officials at the conference warned that rising food prices and hunger caused by the Russian invasion of Ukraine could drive more people in the Sahel into the arms of extremist groups such as IS.

In early May, IS published a video showing gunmen killing 20 Christians in Nigeria’s northern Borno State. One of the extremists, speaking in Hausa, said the murders were to avenge the death of IS leaders in the Middle East earlier this year.

IS operates in the Lake Chad region under the flags of Boko Haram and its offshoot ISWAP, the Islamic State West Africa Province. Both groups have recently lost fighters in battles with multinational forces as well as to infighting between their members.

Boko Haram leader Abubaker Shekau was reportedly killed last year during a fight between his group and ISWAP. In March, 7,000 members of Boko Haram and ISWAP surrendered, according to Nigerian security forces.

In Mali, home to the Islamic State Sahel Province, extremists have come into conflict with mercenaries working for Russia’s Wagner Group – something security experts worry could increase as Wagner fighters employ brutal tactics on behalf of the junta now ruling the country.

“The participation of Wagner troops adds a new dimension to the threat against civilians: Wagner itself has a long history of human rights abuses and Moscow is unlikely to hold the new Malian government – with its own history of violence against civilians – accountable for its actions,” analysts Catrina Doxsee and Jared Thompson recently wrote for the Center for Strategic and International Studies.

Civilian deaths have increased sharply since Wagner arrived in Mali in December 2021 and is working with the Malian Armed Forces (FAMa). This loss of life drives the civilian population away from cooperating with security forces and, potentially, into the arms of extremist groups, Doxsee and Thompson wrote.

“By making civilian harm part and parcel of its operations, FAMa and Wagner will worsen Mali’s broader conflict ecosystem,” the authors wrote. “Civilians, faced with these predatory actors, will be increasingly forced to look elsewhere – such as toward communal militias and jihadists — for security and basic services.”