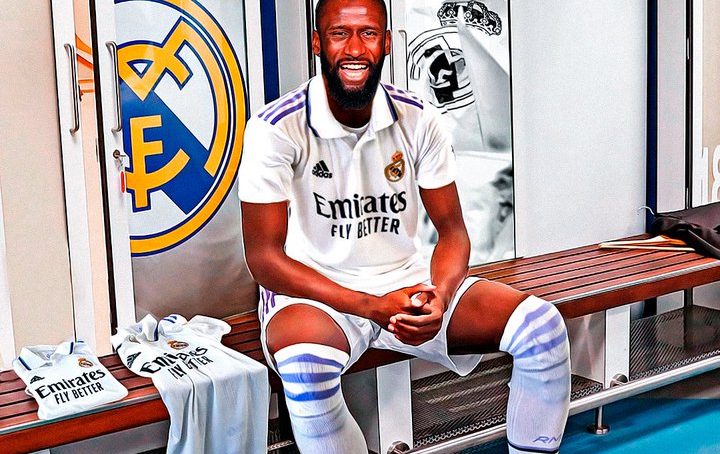 German international defender Antonio Rudiger is jet-set to don Real Madrid colours after completing a transfer from Chelsea, who are said to be fast-tracking their pursuit of long term target Jules Kounde as his replacement.

As soon as he put pen to paper, Rudiger, who spent six years at Stamford Bridge said was “super excited” to join Real Madrid after both the Spanish giants and Chelsea confirmed he had agreed a deal to move to the Bernabeu.

His departure from Stamford Bridge had already been confirmed by manager Thomas Tuchel months ago following the sanctions imposed on the west London club that had prevented them from continuing contract negotiations.

Meanwhile La Prensa Latina reports that Rüdiger will officially be unveiled by the club on June 20. The German player, known for his tenacious defending, played 113 matches for Chelsea, scoring nine, before becoming a free agent this year.

The departure of Rudiger handed Chelsea a boost in their hunt for the signature of Sevilla defender Kounde who almost joined the Blues last summer. The west London club came close to signing the French international last summer and agreed personal terms but a last-minute change of heart from the Spaniards led to the Frenchman remaining in La Liga.

Rudiger’s deal with Chelsea will expire at the end of this month and he has now agreed personal terms and signed a pre-contract agreement with Champions League winners Real Madrid. Both clubs confirmed the news on Thursday, with Rudiger signing a four-year deal believed to be worth in excess of £250,000 ($314,000)-per-week.

The 29-year-old will be officially unveiled at the Bernabeu on Monday June 20 at midday and will address the media at his first press conference shortly afterwards. Reacting to his move to Real, Rudiger wrote on social media: “I’m proud to announce that I’ll be joining Real Madrid.

“I’m super excited for all the challenges ahead and can’t wait to play my first game for this huge club. Hala Madrid!”

Having briefly been ostracised from the team under Frank Lampard, Rudiger became a key component of Tuchel’s Europe-conquering side and established himself as one of the best defenders in the Premier League.

“He departs with 203 appearances and 12 goals to his name, in that time establishing himself as one of the most passionate characters to represent the club in recent memory,” read part of Chelsea’s statement.

“Chelsea football club thanks Toni for his contribution to our success over the last five years and wishes him well in his future career.”

The top priority of Chelsea’s new owners – a consortium led by Todd Boehly – is to give Tuchel the funds he needs to reinforce his backline, with Sevilla’s Jules Kounde, PSG’s Presnel Kimpembe and RB Leipzig’s Josko Gvardiol all on his wish list.

As Rudiger starts new life in Spanish capital, La Colina de Nervion reports that Sevilla are in advanced negotiations with Strasbourg’s highly-rated Ghanaian defender Alexander Djiku, which leaves the door open for Chelsea to agree a deal for Kounde.

According to 90min, Kounde is still prioritising a move to west London with his desire to link up with Tuchel described as ‘unwavering.’ The 23-year-old who has two years left to run on his current deal, starred 44 times for the Spanish side last season, registering three goals as he helped Sevilla qualify for next season’s Champions League.

Chelsea boss Thomas Tuchel could finally get his man this summer as the Blues look to bolster their defensive options. Andreas Christensen and Cesar Azpilicueta look set to move on when their contracts expire later this month and Antonio Rudiger has already confirmed his free transfer to Champions League winners Real Madrid.

Marcos Alonso has stated his desire to return to his native Spain with Barcelona monitoring his situation, potentially leaving Tuchel with a defensive crisis on his hands with only Thiago Silva and Trevoh Chalobah left as recognised centrebacks

With the club’s takeover now complete, Chelsea are again able to enter the transfer market to find replacements for their departing stars.

Chelsea finished third in the Premier League after a stuttering end to the season that also saw them relinquish their Champions League crown in a frantic tie against eventual winners Real Madrid.

After a strong start to the season, Chelsea looked nailed-on to mount a serious title challenge but ran out of steam in the second-half of the season culminating in sanctions placed on the club and former owner Roman Abramovich following Russia’s invasion of Ukraine.