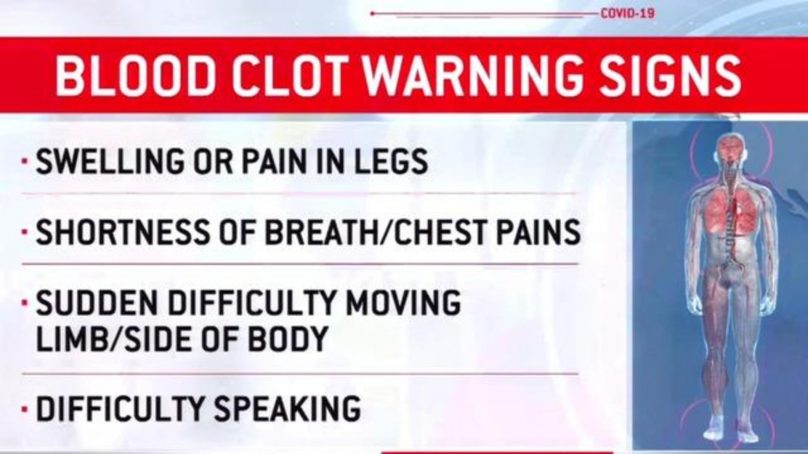 Covid vaccines and blood clots: Why do some people develop mysterious clotting disorder after Covid jab?

It was when the second person with unusual clots came in that Phillip Nicolson knew something was wrong. Blood clots are uncommon in young people, and it’s even rarer to see a combination of blood clots and alarmingly low levels of platelets – cell fragments that help to form clots.

Yet in the space of one week in March, two young people with this pairing of symptoms had arrived at the Queen Elizabeth Hospital in Birmingham, UK, where Nicolson works as a haematology specialist. And both had recently been given the Oxford-AstraZeneca Covid-19 vaccine.

Nicolson had been on call at the hospital all weekend, and had been looking forward to a rest on Monday. Instead, he found himself rushing around to get consent to collect samples to study in the laboratory. By the time he arrived at the second patient’s bedside, a third had been admitted.

That week, Nicolson was among the first to witness what researchers now call vaccine-induced immune thrombotic thrombocytopenia (VITT), a life-threatening and mysterious condition that affects a very small number of people who have received the Oxford-AstraZeneca or Johnson & Johnson (J&J) Covid-19 vaccines.

It is now estimated that VITT occurred in about one in 50,000 people aged under 50 who received the Oxford–AstraZeneca vaccine1. This and similar observations in other countries have led some officials to delay and then scale back the deployment of these vaccines.

Despite fervent work by researchers such as Nicolson, the mechanism that links the vaccines and VITT is still uncertain. Establishing a mechanism could reveal ways to prevent and treat the condition, and improve the design of future vaccines. Over the past few months, researchers have gathered clues and developed a host of hypotheses.

Working through these possibilities is a daunting task. “You can have your hypothesis, but how do you find which is the one that caused an event in maybe one in 100,000 people?” asks John Kelton, a haematologist at McMaster University in Hamilton, Canada. “It’s really, really hard.”

The unusual constellation of symptoms was immediately familiar to some haematologists, particularly those with experience of treating people with a rare reaction to the anti-clotting drug heparin. That syndrome, called HIT, is also characterised by low platelet counts and sometimes the presence of clots.

HIT is caused by heparin, a negatively charged molecule, binding to a positively charged protein called platelet factor 4 (PF4) that is produced by platelets to promote clotting. In some people, the immune system views this complex as foreign, and develops antibodies against it.

These antibodies can also bind to and activate platelets, priming them to clump together and trigger clotting. The clots can clog up important blood vessels, and the condition can be fatal, although some treatments improve the chances of survival.

Only a handful of labs around the world study HIT, and those that do scrambled to get samples from the few people who had been diagnosed with VITT. When researchers analysed the samples, it was clear that vaccine recipients who had this mysterious clotting reaction were also producing antibodies against their own PF42-4. But it was anyone’s guess as to what had triggered these antibodies.

Kelton, who has been studying HIT for decades, had to wait to get precious specimens from people with VITT, and then his team had to wade through samples of varying quality. Some were contaminated by treatments the people with VITT had received.

“Many, many samples were not what I would call pristine,” he says.

“These people are as sick as can be, and the physicians throw the book at them. They have every kind of chemical in them.”

And about two-thirds of the samples his team received lacked the PF4 antibodies altogether, suggesting that the patients did not have VITT, but instead had developed a clotting disorder that was probably unrelated to their vaccination, Kelton says.

Eventually, his team was able to get five samples taken from people before treatment for VITT. When researchers characterised antibodies in the samples, they found that some were binding to PF4 at the same site as the one used by heparin, and that they were also capable of activating platelets.

The results suggested that the mechanism behind the vaccine-linked syndrome was similar to that of HIT – but the trigger seemed to be the vaccine rather than heparin.

Something in the vaccine or the body’s response to it must be binding to PF4 – but what? VITT has been linked to two Covid-19 vaccines, both of which use disabled adenoviruses as a ‘vector’ to shuttle a gene encoding a coronavirus protein, called spike, into human cells. Once there, the gene is expressed and the protein is made.

The immune system detects spike and generates antibodies against it that are crucial for protection against coronavirus infection.

Some researchers have proposed that impurities in the vaccines left over from the manufacturing process – such as snippets of DNA floating around in the solution or proteins in the broth used to grow the virus – are interacting with PF4 to generate the clumps that are then targeted by antibodies6.

Others think the culprit could be the adenovirus itself. Previous work has shown that adenoviruses can bind to platelets and trigger their depletion in mice. It’s conceivable that those mice might also have developed clots if they had been followed for longer, says Maha Othman, who studies blood clotting at Queen’s University in Kingston, Canada, and was lead author of the study.

Before the Covid-19 pandemic, adenovirus-based vaccines were being developed against infections such as HIV and Ebola, but had not yet been used in large populations. There have been no reports that these vaccines produced a VITT-like condition; however, they were not tested in nearly as many people as have received the Oxford–AstraZeneca Covid-19 vaccine.