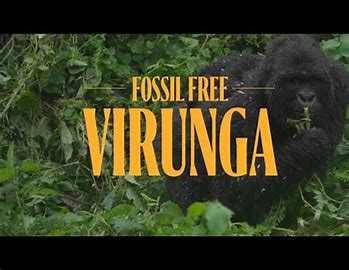 Climate activists in the Democratic Republic of Congo (DRC) have expressed strong opposition to plans for oil exploration in the Virunga National Park. In a short film titled Fossil Free Virunga that was released by 350Africa.org worldwide today, the activists raised concerns with the environmental impacts, as well as the impact to local communities’ livelihoods.

The short film, which was launched during a webinar, highlights the dangers posed to the national park and local communities by oil exploration in the area. Together with Salonga National Park, the world’s second-biggest tropical rainforest reserve, these vulnerable areas may be auctioned in a new series of oil permits putting at risk not only endangered species, but also the source of income for many local communities.

Through this petition climate activists are appealing for support to bring oil exploration in the area to a stop, in order to avert the adverse effects on the communities and the environment.

Landry Ninteretse of 350.org said, “Virunga national park is one of the most biologically diverse areas in the world. Any oil activity in the park and its surrounding areas could permanently damage the rich ecosystems and biodiversity of the area and negatively impact hundreds of thousands of community members whose livelihoods depend on the park’s resources and activities. The government of DR Congo needs to put the environment and the people first, as opposed to furthering the interests of the companies that have been granted permits for exploration.”

On his part, a DRC Climate activist Andre Moliro observed, “The government should act in the interest of its citizens by protecting them and creating opportunities that benefit communities’ livelihoods and preserve the natural resources in the region. Access to clean energy is an integral part of sustainable development and commitments to mitigate climate change should be driving efforts to develop sources of alternative and renewable energy.”

Justin Mutabesha, Climate activist based in Goma, DRC said, “The need to hasten our efforts and support the drive for ecosystem preservation and clean energy access for all is critical. It should therefore be the government’s priority to ensure that no oil exploration or pollution occurs in Virunga and to accelerate sustainable livelihoods for the people and rich ecosystems of the area.”

Between 2005-2010, the Congolese government through the Ministry of Hydrocarbons approved licenses for oil concessions to foreign fossil fuel companies like Efora, Total, Socco, Dominion Petroleum to explore and operate seismic tests. This move is in violation of Ordinance-Law 69-041 of August 22, 1969, on nature conservation and international conventions ratified by the Democratic Republic of Congo (DRC).