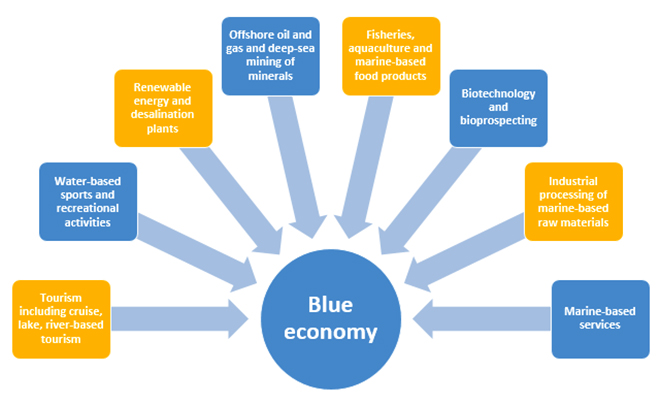 “Africa is one of the most blessed continents in the world in terms of its potential marine and terrestrial natural resources,” wrote Seleman Yusuph Kitenge of the AUDA. “However, most of these riches, particularly the marine resources, which contribute to the Blue Economy, are yet to be responsibly utilised to foster the economic transformation of a rich yet poor continent.”

According to the Ocean Science Foundation, African nations lose an estimated $10 billion annually to illegal trawlers, the majority of which are Chinese.

In Ghana, illegal, unreported and unregulated (IUU) fishing has resulted in an 80 per cent decline in small fish species such as sardinella over the past two decades. Officials are trying to fight illegal fishing and other sea crimes while boosting the country’s blue economy through the new National Integrated Maritime Strategy (NIMS).

The strategy was developed with support from the Centre for Maritime Law and Security Africa (CEMLAWS) and the United Nations Office on Drugs and Crime with funding from Denmark.

The strategy aims to strengthen maritime governance and security, protect marine and coastal environments, and develop regional and international cooperation on maritime issues.

Godfred Sowah Khartey, a fellow at CEMLAWS, said IUU fishing must be addressed to strengthen the country’s blue economy.

“Just as we identify the challenges emerging from ocean activities, so do we identify its prospects,” Khartey told online publication GhanaWeb. “The NIMS wants to get the blue economy running. Because with a thriving blue economy, jobs are created, poverty is eliminated and crimes such as piracy is reduced.”

In Sierra Leone, illegal fishing costs the country about $29 million a year. The crimes are primarily committed by large industrial trawlers, about 75 per cent, of which are connected to China, according to estimates by China Dialogue Ocean.

In 2016, the European Union (EU) issued Sierra Leone a yellow card after concluding that the country’s level of development and engagement against IUU fishing was inadequate.

This year, Sierra Leonean officials signed a controversial deal with China to develop an industrial fishing harbour on 100 hectares of beach and protected rainforests. Conservationists say no one conducted social or environmental impact assessments on the project.

Locals worry that the harbour will draw even more foreign industrial trawlers, which will take their fish and income and drive away tourists.

Kadiatu Sesay, a single parent of three who works at the resort Tito’s Paradise Eco Lodge, is among them.

“This is where I work to take good care of my family and send my children to school,” Sesay told China Dialogue Ocean. “If they close this place, I will lose my job and my family will suffer.”

Maritime experts long have warned of a link between IUU fishing and increased piracy. That’s certainly true in the Gulf of Guinea, where decades of increasing illegal fishing preceded a sharp increase in pirate attacks. Last year, the region accounted for more than 95 per cent of all maritime kidnappings globally, according to the International Maritime Bureau.

That’s a huge problem because more than 90 per cent of Africa’s imports and exports are transported by sea, according to the AUDA.

In other parts of Africa, enhanced regional maritime information sharing is strengthening efforts to combat IUU fishing and other sea crimes.

The Seychelles, an archipelago of 115 tiny islands in the Western Indian Ocean, has been lauded for such efforts by the Institute for Security Studies and the Observer Research Foundation, an independent global think tank based in India.

The islands’ coral beaches and abundant wildlife, which includes giant tortoises and numerous bird species, make it a popular tourist destination. The Seychelles is about 1,800 kilometres northeast of Madagascar.

In the Seychelles, the Regional Coordination Operations Centre (RCOC), which mainly coordinates joint law enforcement actions at sea, works around the clock in conjunction with the Madagascar-based Regional Maritime Information Fusion Centre, which shares maritime information and alerts the RCOC of abnormal activity at sea. The centres operate under the Indian Ocean Commission (IOC) with EU funding.

“Seychelles depends mainly on fisheries and tourism,” Raj Mohabeer, the IOC’s officer in charge, told ADF. “If these sectors drop significantly, which was the case when piracy surged a decade ago, the others in the Seychelles economy will be impacted heavily. It’s normal that they give so much emphasis on IUU, and it’s the same for most of the islands” in the region.