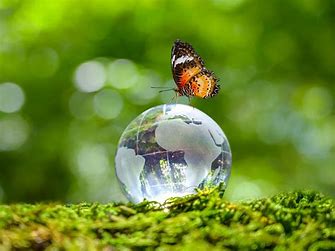 There are laws of nature that relate to the ways in which we, as humans, behave. As laws of human behaviour, they are both narrower and messier than the broader laws of biology; they are as much tendencies as laws.

Yet they are tendencies repeated across times and cultures, tendencies that are relevant to understanding the future both because they suggest how we are most likely to behave and because they also indicate what we need to be aware of if we are to go against the rule.

One of the laws of human behaviour relates to control, to our tendency to try to simplify life’s complexities, just as one might try to straighten and channel an ancient and powerful river. The coming years will present more novel ecological conditions than have occurred in millions of years gone by. Our human population will swell.

More than half the Earth is now covered by ecosystems we have created – cities, farm fields, waste-treatment plants. We now, meanwhile, control, directly and incompetently, many of the most important ecological processes on Earth.

Humans eat half of all the net primary productivity, the green life that grows, on Earth. And then there is the climate. In the next 20 years, climatic conditions will emerge unlike any humans have ever been exposed to before.

Even under the most optimistic scenarios, by the year 2080 hundreds of millions of species will need to migrate to new regions and even new continents in order to survive. We are reshaping nature at unprecedented scales, and for the most part, we are absentmindedly looking the other way while doing so.

The first law of diversity is manifest in the brains of birds and mammals. In recent years, ecologists have revealed that animals with brains capable of using inventive intelligence to carry out novel tasks are favoured by variable environments. These animals include crows, ravens, parrots, and some primates.

Such animals use their intelligence to buffer the diverse conditions they encounter, a phenomenon described as the law of cognitive buffering. When environments that were once consistent and stable become variable, these species with inventive intelligence become more common. The world becomes a crow’s world.

A second law of diversity, the diversity-stability law, states that ecosystems that include more species are more stable through time. An understanding of this law and of the value of diversity proves useful in the context of agriculture. Regions with a greater diversity of crops have the potential to have more stable crop yield from year to year and hence less risk of crop shortages.

Repeatedly, although our tendency is often to try to simplify nature when we are confronted with change or even to rebuild it from scratch, maintaining nature’s diversity is more likely to lead to sustained success.

When we try to control nature, we often come to imagine ourselves as outside nature. We speak of ourselves as if we were no longer animals, as if we were a species alone, disconnected from the rest of life and subject to different rules. This is a mistake. We are both part of and intimately dependent on nature. The law of dependence states that all species depend on other species. And we, as humans, are probably dependent on more species than any other species ever to exist.

Meanwhile, just because we depend on other species does not mean nature depends on us. Long after we go extinct, the rules of life will continue. Indeed, the worst assaults we carry out on the world around us nonetheless favour some species. What is remarkable about the big story of life is the extent to which it is ultimately independent of us.

Finally, one of the most consequential sets of laws regulating how we plan for the future relates simultaneously to our ignorance about nature and our misperceptions about its dimensions. The law of anthropocentrism states that, as humans, we tend to imagine the biological world to be filled with species like us, species with eyes, brains, and backbones.

Repeatedly scientists have announced the end (or near end) of science, the discovery of new species, or the discovery of life’s extremes. Usually, in doing so, they position themselves as having been key to putting the final pieces in place.

“Finally, now that I am done, we are done. Look what I know!” And repeatedly, after such announcements, new discoveries have revealed life to be far grander and more poorly studied than had been imagined.

What I call “Erwin’s law” reflects the reality that most of life is not yet named, much less studied. This law is named for a beetle biologist, Terry Erwin, who, with a single study in a rainforest in Panama, changed our understanding of the dimensions of life. Erwin initiated a revolution in our understanding of life analogous to the Copernican Revolution.

Just as that revolution was complete when scientists came to agree that Earth and the other planets circled the sun, the Erwinian revolution will be complete when we remember that the living world is far vaster and more unexplored than we imagine it to be.

Erwin’s law reminds us that despite our ability to tinker godlike with the workings of Earth’s living systems, we remain more ignorant than we are knowing. And yet, even amidst the extraordinary breadth and depth of our ignorance (perhaps seven out of eight animal species is yet to be named, much less studied, and billions of bacteria await discovery, some of them living on your body right now as you read), we have to make decisions about our relationship with the rest of life.

Our best hope, in this world in which we know so little and affect so much, is to take into account the laws and lawlike rules of life in our planning.

Only by keeping nature’s laws in mind can we imagine a sustainable future for our species, a future in which our cities and towns are not repeatedly flooded by the consequences of our failed attempts to manage life – not only by water but also by pests, parasites, and hunger. We will fail again and again if we ignore these laws.

The bad news is that our default approach to nature seems to be to try to hold it back. We tend to fight nature at our own expense and then blame vengeful gods when things don’t work out.

The good news is that it doesn’t have to be that way: If we pay attention to a set of relatively simple laws of life, we have a much better chance at surviving a hundred years, a thousand years, or even a million years. And if we don’t, well, ecologists and evolutionary biologists together actually have a pretty good idea of the trajectory of life in our absence.