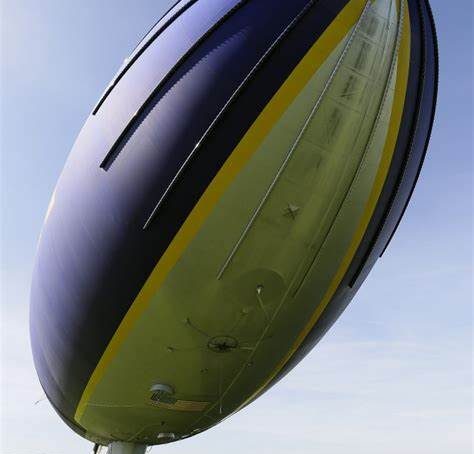 The Tanzanian islands of Zanzibar and Pemba are about to become a test site for a mobile internet network its creators hope will not just revolutionise lives there, but possibly across sub-Saharan Africa and beyond.

Only around 20 per cent of Tanzanians use the internet, according to the World Bank. That’s low, even for sub-Saharan Africa where usage is affected by limited internet coverage and compounded by high data costs and low digital literacy. However, change could soon be written in the sky.

Two solar-powered, helium-filled balloons will float 300 meters (984 feet) above land and have a broadcast range of around 70 kilometres (44 miles) apiece, using 3G and 4G frequencies to deliver their signal. The balloons can survive winds of up to 150 kilometres per hour (93 miles per hour) and stay airborne for up to 14 days before descending for refilling.

In the few hours of downtime, other aerostats will be airborne, ensuring users are never without service, says the company.

The signal from an aerostat – used as a low altitude platform station (LAPS) – is sufficient for tasks like internet browsing and email, says World Mobile.

Meanwhile, construction is underway for a network of nodes on the ground, each able to provide WiFi for hundreds of people with speeds sufficient for video streaming and gaming. The network comprising 125 locations is scheduled for completion this year and the first balloon will launch in June.

“Zanzibar represents a really interesting opportunity,” World Mobile CEO Micky Watkins tells CNN. “It’s approximately one and a half million people on the islands. It’s like a small country.”

World Mobile will be aiming to succeed where larger companies have failed. Facebook’s Project Aquila, an internet delivery system using high altitude drones, was closed in 2018. Loon, which used stratospheric balloons to deliver internet connectivity, and was part of Google parent company Alphabet, folded in January 2021.

Loon was used in disaster relief efforts, including in the aftermath of Hurricane Maria, which hit Puerto Rico in 2017 (Loon partnered with CNN parent company AT&T to do so) and was also trialled commercially in Kenya as recently as 2020.

Derek Long, head of telecoms and mobile at technology advisory firm Cambridge Consultants, says Loon and Facebook didn’t succeed because they could not make the economics of their systems work, among other factors. However, he says, “a hybrid model can be fine-tuned to overcome this by providing high-capacity terrestrial solutions in highly populated areas and lower cost coverage solutions with non-terrestrial platforms.”

Long says that, although the novelty of aerostats “may in itself generate some resistance to market acceptance,” a hybrid land-air model, if “integrated seamlessly,” could be the “best solution for the challenge at hand.”

World Mobile is also conducting experiments with HAPS technology, but is not waiting on it before rolling out its aerostats and ground WiFi network. “It would be silly to spend three to four years researching (and) developing the full network solution without deploying what we know we can deploy now,” says Watkins.

Sara Ballan, senior digital development specialist at the World Bank, says in Tanzania, connectivity has an economic impact at a personal and national level.

“For a farmer, connectivity can open access to weather information, market prices and easier payment flows. For the economy, digital transformation is a driver of growth, innovation, job creation and access to services,” she explains. “Unlocking this potential is important for society at large, but especially for the growing youth population seeking jobs and opportunities.”

Ballan notes that connectivity is only part of the solution, “We are optimistic that within a few years, (telecommunication) innovations will fill important connectivity gaps (in sub-Saharan Africa) … Affordability is, however, still a key issue, and innovative business models will continue to be needed to connect poor populations.”

The cost of the network rollout in Zanzibar is many times cheaper than legacy infrastructure, Watkins claims, and World Mobile aims to provide connectivity for half the price of existing operators.

World Mobile recently raised $40 million for the development of software and initial deployment of its network, says the CEO. The company owns the network and operating license in Zanzibar but Watkins says he hopes members of the public will eventually be able to buy up 70 per cent of the WiFi nodes, running and maintaining the network’s node infrastructure and earning revenue from it.

It’s an unusual business model, says Long, in a market categorized by a small number of large multinational operations.

“If World Mobile can succeed in such a market, in which there are already several large incumbents, then this bodes well for the future,” Long offers.

In addition to World Mobile’s operating licenses in Zanzibar and Tanzania, Watkins expects a license to follow in Kenya early this year, adding the company has earmarked another 18 countries for its system. Entering a crucial year for the company, Watkins is bullish about World Mobile’s prospects.

“We get the sharing economy right in Zanzibar, we prove that at scale in Kenya and Tanzania, and then the rest of the world is ours,” he says.