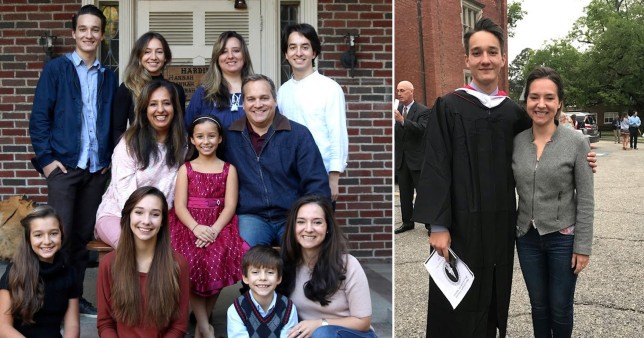 Brainy bunch: How dad and mum in US home-tutored their 10 children into university by age 13

‘Brainy bunch’ family in the US has mastered home schooling, with all 10 children starting university the same year they became teenagers.

High school sweethearts Monalisa and Kit Harding, both 53, have made a name for themselves as home schooling experts after getting their 10 children through high school and university all before 18.

Their oldest Hannah, now 34, became a child prodigy in maths when she got her bachelor’s degree from Auburn University, in Montgomery, at the age of 17.

Monalisa and Kit also raised the youngest-ever lawyer – their sixth child Seth Harding, now 20, who qualified through university and professional exams at just 19.

The family from San Jose in California have recently celebrated their youngest, 11-year-old Thunder, passing his entrance exams for university. When he starts, he will join his older sister Lorennah, 13, who is in her second year at Bellevue University.

Reaching these impressive milestones so early has become commonplace in the Harding family – as every single one of the children has started university by the time, they turn 13.

The Harding family. A family in San Jose, California, who wrote ‘The Brainy Bunch’, have home-schooled their children into university by the age of 13.

But Monalisa insists her kids are not geniuses, crediting the effectiveness of home schooling and her children’s hard work for their success.

The mum said, ‘The nature of home schooling is so efficient. Anyone can do it. It’s just about parents dedicating the time to get it done and prioritising their children’s education above all else. We’re not a wealthy family. We had to make sacrifices so that I had the time to teach each of them individually. When you raise kids in an environment where home schooling and hard work is the norm, then, as they grow, they’ll naturally adapt to it and take it in their stride.”

‘They all worked and continue to work extremely hard, which is why they’re breaking new ground every day. I couldn’t be prouder of them.’

Monalisa and Kit, a military man who now works in government, also help other parents who want to start home schooling their own children. They have spoken at several conferences all over the US and have travelled as far as Japan to share their experience.

‘It’s really fulfilling because we put our hearts and souls into our children, and knowing people admire that and want to do the same is a really great feeling,’ Monalisa said.

The couple even released a book about their educational methods in 2014 – humorously named The Brainy Bunch.

Monalisa said, ‘It’s important to find that balance between not putting too much pressure on your kids and making sure they’re reaching their full potential.

‘We just have Thunder and Lorennah to get through college now, and then we can finally think about making some time for ourselves. It’s been a hell of a journey but we wouldn’t change it for the world!’

Keith, 23, got a bachelor of arts in music from Faulkner University at 15 before he achieved his master’s in counselling at 17.

Seth, 21, got a bachelor of arts in political science from Huntington College at 16.

Katrinnah, 18, got her bachelor of art in political science from Huntington College at 16.

Mariannah, 16, got her bachelor of art in health science from Bellevue University at 16.

Lorennah, 13, is currently in her second year of university studies.

Thunder James, 11, is about to start his first year at Bellevue University.