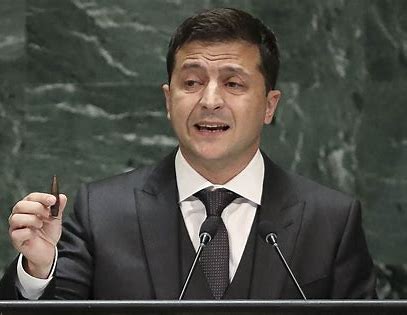 In this wide-ranging interview, which has been condensed and lightly edited for clarity, Ukraine President Volodymyr Zelensky called on Big Tech to do more to pull out of Russia, praised Elon Musk’s Starlink and explained why modern leaders have to appeal to the distracted social media generation. “We just live in another time, no longer the time of postmen,” he said.

Q: Are social media companies doing enough now to comply with sanctions and maintain the flow of verifiable information? What else can they do?

Some platforms and social networks have already left Russia, which I think is very important, because I would not like them to be influenced by the country’s internal policies. The thing is that those companies are the ones who have all of the influence now. There is an information – call it what you want – a wall, or an information submarine, where the people of the Russian Federation are. Because of this veil, made by the political elite of the Russian Federation, they are in their own informational space, and that space is fuelled by the Kremlin, which only gives the information that is favourable to them. There is no freedom in their space.

Some big, cool platforms – despite being blocked in Russia – should find a technological, ideological or some kind of creative way to show them the truth of our reality so that Russian people would understand that they live in another world. The main thing is that people on social media platforms live in freedom, and Russians are outside of it, as if on another planet.

Q: Can sanctions be improved?

For sanctions to work, they mustn’t be partial. The exchange rate of Russia’s national currency has almost returned to where it was before the sanctions, which means that they have found a way out of the constraints imposed by sanctions. [In fact, by the time of the interview, the ruble was even stronger than at the start of the war: 65 rubles to the dollar, compared to nearly 85 rubles to the dollar on February 24.] It is necessary to implement sanctions completely and remove any opportunities to bypass them. Otherwise, all sanctions become artificial.

Like the oil embargo, for example. Up to 80 per cent of all the European Union countries say they will support the oil embargo being implemented, but what is going to happen with the 20 per cent of the countries that do not? They will be able to receive the oil. But who will check and monitor this process? Those countries will be allowed to get a bigger capacity of oil than they need and may sell portions of it to countries that publicly supported the sanctions.

I want our allies to follow the sanctions to the end, block Russia and show that the civilised world is stronger than any energy resource.

Q: Is the Starlink system – the constellation of satellites from SpaceX that provides people internet access – effective?

Very effective, very effective. It helped us a lot, in many moments related to the blockade of our cities, towns, and related to the occupied territories. Sometimes we completely lost communication with those places. To lose contact with those people is to lose control completely, to lose reality. Believe me: People who got out of the occupied cities, where there was no such assistance as Starlink, said that the Russians told them that Ukraine doesn’t exist anymore, and some people even began to believe it. I am really grateful for the support of Starlink.

Q: Has Ukraine’s IT Army been vital?

In the first few days of the war, we dedicated a lot of time to the logistics of a battle in cyberspace. I believe that this is the future, and it became our, I believe, third army. We probably have several armies: our People’s Army, the Armed Forces of Ukraine, and the IT Army. The IT Army did a lot for the cyber-defence of institutions that were heavily attacked.

The invaders wanted to make the National Bank and the Cabinet of Ministers fall. They wanted to cut down everything so that we could not give people their salaries and pensions, so that there was no light and no communication, so that people could not hear me and hear us all, hear live information. Our IT Army worked well here.

Q: Did your role in the political satire Servant of the People prepare you for your presidency?

Some Ukrainians live here and think, “Maybe I should find something else, move to another country.” I

Q: When the war is over, what will be your biggest challenge?

The return of people from abroad. We need to give them conditions that are not worse than the conditions where they are today. They are in Poland, Germany, Canada, in the United States. Different countries provide different support, different infrastructure, different comfort, different salaries, and different opportunities. We have an advantage, as this is their homeland, but we’ll need to restore living conditions, security conditions, and salary conditions. We will not give the same salaries as in Britain, for example. But we have to offer comparable living conditions. The middle class should feel like a middle class, not lower, when they return. We have to do everything to make people feel like this is the same unified Europe and that they’re not returning to a different planet.

Q: How has the war changed you?

Honestly, I don’t know. This question is difficult. In most cases, I want to remain an ordinary person, since I am the same person, I was before, like everyone else. The drops of rain are as visible on me as on any other person.

The value of life has changed. So, let’s say that my attitude has changed, as I do not pay attention to trivialities anymore, and there are clear aspects on which I am focused. The question of the price of freedom, which we learned from books in school, has now become a reality. You know this price. You have seen the number of people who died. You can clearly see the number of tortured people.

On the contrary, you understand that this price of freedom does not exist in absolutely measurable terms, because you do not know how many people will still lose their lives for the sake of striving to live, for the sake of freedom.

Geoffrey Cain is the author of The Perfect Police State, about China’s surveillance dystopia. He is a senior fellow for critical emerging technologies at the Lincoln Network, a tech-policy think-tank, and a visiting fellow at the National Security Institute at George Mason University.