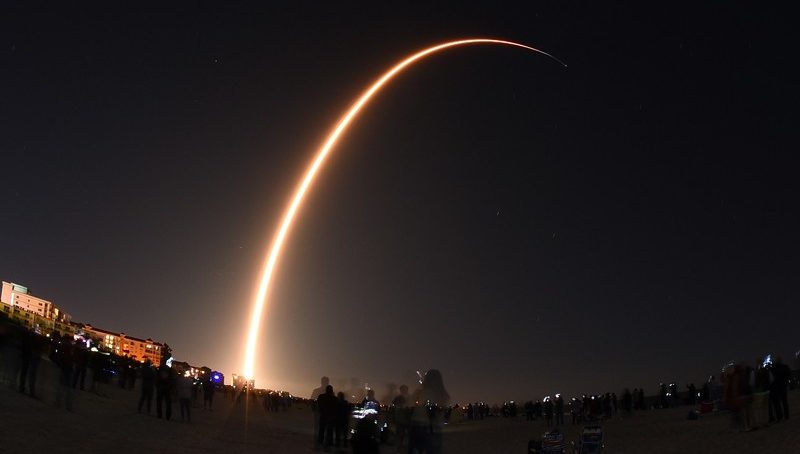 Aerospace companies have launched about 2,000 Internet satellites into orbit around Earth over the past two years, nearly doubling the number of active satellites. This has sparked concerns among astronomers and other skygazers, who worry about interference with observations of the night sky.

Now, in what would be the biggest international step yet towards addressing these concerns, diplomats at a United Nations forum next month might discuss whether humanity has a right to “dark and quiet skies.” The debate could initiate a framework for how scientists and the public would deal with the flood of new satellites – with many more expected.

Tens of thousands of satellites could be added to Earth orbit in the next few years to provide broadband Internet, if companies and governments build and launch all the networks, or “megaconstellations,” they have publicly announced. The sheer number of these could mean that hundreds are visible all night long, affecting the sky like never before in human history.

“These constellations are changing dramatically the way space has been used,” says Piero Benvenuti, an astronomer at the University of Padua in Italy and a former general secretary of the International Astronomical Union (IAU).

He and other astronomers have been working through the IAU to raise international awareness of how the megaconstellations are affecting scientists and members of the public. They say the goal is not to pit astronomers against satellite companies, but to develop a vision of how to fairly use the shared realm of outer space.

“The consensus has to come from all the countries,” says Connie Walker, an astronomer at NOIRLab, an umbrella organisation for several US-funded observatories. Scientists discussed these and other topics at a conference on satellite constellations, called SATCON2, that was held virtually from July 12-16.

Many astronomers were caught by surprise in 2019, when the first batch of Starlink Internet satellites launched by SpaceX of Hawthorne, California, turned out to be brighter than expected in astronomical images. In response to complaints, SpaceX tested several strategies to darken the satellites; it now launches all of its Starlinks with sunshades attached, to make them less visible when sunlight reflects off them.

Astronomers and representatives of several companies, including SpaceX, have settled on a brightness threshold for satellites that is slightly fainter than the human eye can see in a dark sky. Starlinks are close to that brightness threshold but do not currently meet it, says Meredith Rawls, an astronomer at the University of Washington in Seattle.

The threshold is a goal and not a requirement. Even if companies adhere to it, the satellites will be visible in telescopes. They are particularly disruptive to telescopes that survey large swathes of the sky. Up to 40 per cent of images to be taken by the Vera C. Rubin Observatory, a major US telescope that is under construction in Chile, could be marred by satellite streaks near twilight and dawn.

Transmissions from some satellites could also interfere with radio telescopes such as the Square Kilometre Array, a major international observatory being built in South Africa and Australia. There are no laws governing the impact of satellites on the night sky. The 1967 Outer Space Treaty, which is the foundational document regarding international relations in space, holds that outer space is “free for exploration.”

But there is precedent for asking the UN to try to achieve international consensus on how to handle visual pollution of the sky. In 2002, at the urging of the IAU, the UN Committee on the Peaceful Uses of Outer Space (COPUOS) briefly discussed whether “obtrusive space advertising”, such as space billboards that would be visible from Earth, could be regulated.

A marketer proposed this type of billboard for the 1996 Olympic Games, but it never became reality, and COPUOS never acted on the topic. In April, Benvenuti and other astronomers were able to get the issue of satellite constellations raised during a COPUOS subcommittee meeting, when delegations from five nations signed up to an IAU-led white paper saying that the megaconstellations are a concern for astronomers and others.

“Introducing the paper gave us the reason to talk to all these space-policy people in lots of countries about the issue,” says Andy Williams, the external-relations officer for the European Southern Observatory in Garching, Germany.

“It’s a fantastic way to raise awareness.” The UN has no power to regulate launches, but it could bring together nations to establish international norms that would encourage satellite operators to consider and mitigate the effects of their megaconstellations on astronomy.

Delegations from the United States, Canada and Japan proposed that the subcommittee continue to discuss the topic of satellite constellations as a regular item on its meeting agenda. But those from China and Russia objected, saying they needed more time to study the issue.

China, like several other nations, is developing plans for a satellite megaconstellation to provide broadband Internet around the globe.

Now, Benvenuti and his colleagues are working to see whether the entire COPUOS might take up the topic at its next meeting, which begins on August 25. That kind of grassroots pressure from astronomers is the main pathway for nations to begin discussing the topic.

“The debate will have to take place at international fora,” says Tanja Masson-Zwaan, a space-law researcher at Leiden University in the Netherlands.

In the meantime, astronomers are working on other solutions to the problem of interference from satellite constellations. Those include developing databases of satellite positions to predict when satellites will pass overhead – so that telescopes can temporarily avoid that part of the sky – and software to wipe satellite trails out of images.

Others are working to incorporate more voices into the debate over megaconstellations so that it is not dominated by Western astronomers. Many Indigenous communities have deep cultural histories entwined with the stars, says Aparna Venkatesan, an astronomer at the University of San Francisco, California, who is leading efforts to have those voices heard. The appearance of satellite streaks can harm that cultural identity.

But time is tight. SpaceX is launching fresh batches of Starlinks – around 60 satellites per batch, sometimes several times a month.

“People are spending years establishing relationships, but in the meantime the satellites are launching continuously,” says Venkatesan. “It’s almost like we are arriving at solutions for a problem three years ago.”