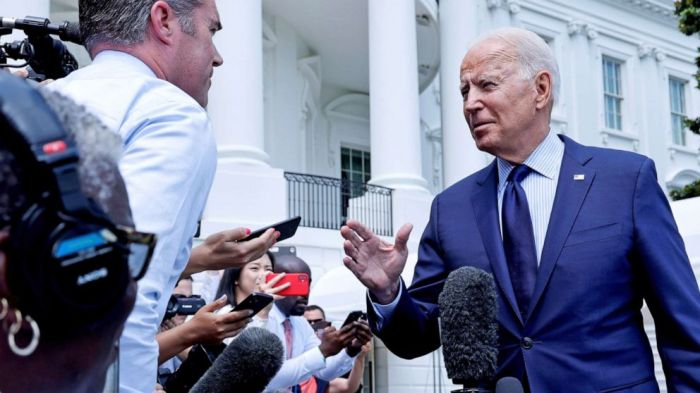 The White House and Facebook got into a feud over the past few days after President Biden and aides repeatedly accused the company of doing too little to combat Covid vaccine misinformation.

On Thursday, US surgeon general Vivek Murthy released an advisory about health misinformation that included some fairly banal observations about how fake news spreads on social media. Then, White House spokeswoman Jen Psaki chastised Facebook for not banning users who violate its policies on vaccine content.

Finally, on Friday, Biden was asked by a reporter what his message to platforms like Facebook was, and he replied, “They’re killing people.” The company responded testily, accusing the White House of scapegoating it and insisting that it has saved lives by displaying accurate Covid information. (On Monday, Biden said he had been referring to vaccine deniers, not Facebook, when he made the “killing” comment.)

If there’s one sentence encapsulating how dysfunctional the whole debate is, it’s this, from a Sunday Wall Street Journal article: “‘The reality is that misinformation is still spreading like wildfire in our country, aided and abetted by technology platforms,” Dr Murthy said on Fox News Sunday.

It isn’t what Murthy said there that matters, it’s where he said it. The surgeon general was warning about how misinformation leads to vaccine hesitancy and, thus, preventable Covid deaths. He was appearing on a network that encourages viewers to fear and distrust the vaccines every morning and night. And yet Murthy aimed his criticism not at Fox, but at social media.

What changed was signalling from powerful conservatives. One recent experiment found that showing a clip of Donald Trump praising Covid vaccines made self-identified Republicans more likely to say they intend to get vaccinated. But that sort of messaging from conservative elites is rare. Instead, the dominant message is one of distrust.

Tucker Carlson, the host of the most popular show on cable news, with nearly three million nightly viewers, regularly brings vaccine sceptics on the air. He has said on-air that college students “shouldn’t get the shot,” and he recently referred to a Biden administration proposal to send people door-to-door to encourage vaccination as “the greatest scandal in my lifetime, by far.”

A Fox News spokesperson pointed out that several on-air personalities have recently promoted vaccines. On Monday morning, Steve Doocy, a host of Fox & Friends, urged viewers to “get the shot.” (But co-host Brian Kilmeade immediately pushed back, saying, “You make your own decision. It’s available to everyone. We’re not doctors.”) But these seem to be exceptions to a broader trend.

The network’s most popular hosts are far less likely to encourage vaccination. According to the liberal watchdog group Media Matters, nearly 60 per cent of vaccine-related segments on Fox News over a recent two-week period undermined the vaccination effort, usually by portraying it as government tyranny, medically risky, or both.

It is, in short, very hard to argue that any social network has anything close to the impact of Fox News and other conservative media on vaccine hesitancy. Even the evidence incriminating Facebook tends to implicate Fox even more: Data from CrowdTangle, a Facebook-owned analytics tool, shows that right-wing media figures, including those who sow doubt about vaccines, consistently drive the most engagement.

“All my research is on things that social media platforms can do to make things better,” said David Rand, a professor at MIT and one of the authors of the study testing the impact of Trump praising vaccines. “But I think TV and radio, particularly conservative TV and radio, are essentially getting a free pass right now, even though they’re doing amazing harm.”