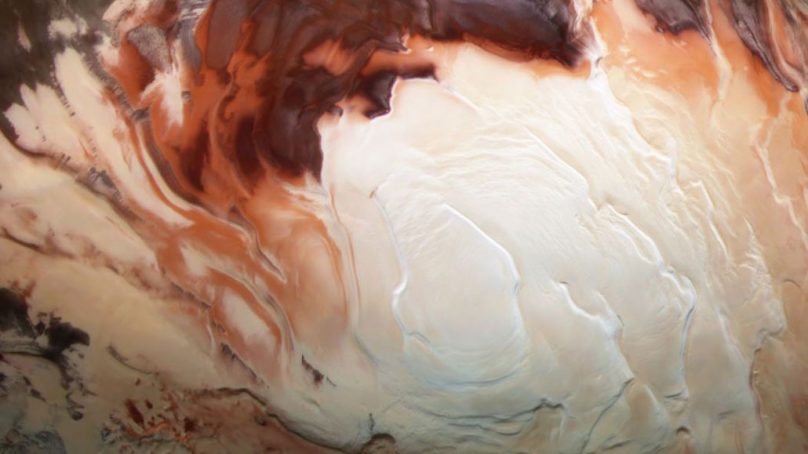 The possibility of a lake roughly 20 kilometres across was first raised in 2018, when the European Space Agency’s Mars Express spacecraft probed the planet’s southern polar cap with its Mars Advanced Radar for Subsurface and Ionosphere Sounding, or MARSIS, instrument.

The orbiter detected bright spots on radar measurements, hinting at a large body of liquid water beneath 1.5 kilometres of solid ice that could be an abode to living organisms. Subsequent work found hints of additional pools surrounding the main lake basin.

But the planetary science community has always held some scepticism over the lakes’ existence, which would require some kind of continuous geothermal heating to maintain subglacial conditions. Below the ice, temperatures average minus 68° Celsius, far past the freezing point of water, even if the lakes are a brine containing a healthy amount of salt, which lowers water’s freezing point. An underground magma pool would be needed to keep the area liquid – an unlikely scenario given Mars’ lack of present-day volcanism.

“If it’s not liquid water, is there something else that could explain the bright radar reflections we’re seeing?” asks planetary scientist Carver Bierson of Arizona State University in Tempe.

In a study published in the July 16 Geophysical Research Letters, Bierson and colleagues describe a couple other substances that could explain the reflections. Radar’s reflectivity depends on the electrical conductivity of the material the radar signal moves through. Liquid water has a fairly distinctive radar signature, but examining the electrical properties of both clay minerals and frozen brine revealed those materials could mimic this signal.

Adding weight to the non-lake explanation is a study from an independent team, published in the same issue of Geophysical Research Letters. The initial 2018 watery findings were based on MARSIS data focused on a small section of the southern ice cap, but the instrument has now built-up three-dimensional maps of the entire south pole, where hundreds to thousands of additional bright spots appear.

“We find them literally all over the region,” says planetary scientist Aditya Khuller, also of Arizona State University. “These signatures aren’t unique. We see them in places where we expect it to be really cold.”

Creating plausible scenarios to maintain liquid water in all of these locations would be a tough exercise. Both Khuller and Bierson think it is far more likely that MARSIS is pointing to some kind of widespread geophysical process that created minerals or frozen brines.

While previous work had already raised doubts about the lake interpretation, these additional data points might represent the pools’ death knell.

“Putting these two papers together with the other existing literature, I would say this puts us at 85 percent confidence that this is not a lake,” says Edgard Rivera-Valentín, a planetary scientist at the Lunar and Planetary Institute in Houston who was not involved in either study.

The lakes, if they do exist, would likely be extremely cold and contain as much as 50 percent salt — conditions in which no known organisms on Earth can survive. Given that, the pools wouldn’t make particularly strong astrobiological targets anyway, Rivera-Valentín says.

In the meantime, Khuller already has his eye on other areas of potential habitability on the Red Planet, such as warmer midlatitude regions where satellites have seen evidence of ice melting in the sun. “I think there are places where liquid water could be on Mars today,” he says. “But I don’t think it’s at the south pole.”