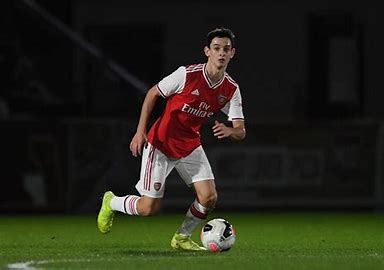 The 17-year-old midfielder is highly-rated by the club’s Hale End academy staff and is pushing for a role in Mikel Arteta’s senior set-up. There were rumours Patino would be involved in Arsenal’s recent Carabao Cup third round clash against AFC Wimbledon a fortnight ago.

The fixture against their League One opposition seemed the ideal opportunity for Patino to get his first taste of senior action, but he was eventually left out of the matchday squad due to Partey’s request.

According to Football London, Patino and fellow Gunner’s youngster Tim Akinola, 20, were poised to be included in Arteta’s squad for the clash, but Partey’s desire to play saw both of them left out entirely.

Partey ended up playing an hour of the match, which Arsenal won comfortably 3-0, though fans were no doubt disappointed not to catch a glimpse of rising star Patino, who has been tipped for a bright future at the club.

Asked why the wonderkid was omitted from the squad, Arteta replied: “He was very close [to being selected]. But at the end we decided that some players needed minutes. It will happen naturally with time.”

Akinola was also unfortunate, having impressed since joining Arsenal from Huddersfield Town in the summer of 2020, though the midfielder could be in line for a contract extension and may be loaned out in January to gain first-team experience.

Whether either player makes their debut this season now could be unlikely, given Arsenal have been handed a tricky draw in the next round of the Carabao Cup at home to Leeds United. The lack of European football this season has also diminished the opportunities available for Arteta to blood some of the club’s youngsters.

There could still be a chance in the FA Cup when it kicks in for the Premier League clubs in January, but again it will likely depend on who they draw in the competition.

Out of the academy talents coming through the ranks, though, general consensus among Arsenal’s staff is that Patino is the one to watch. Arsenal snapped him up from Luton Town when he was just 12, paying £10,000 in exchange.

Patino has regularly been pitted against older players, such is his ability, and even captained an England under-16 side when he was only 14. He has been likened to Manchester City star Phil Foden, as well as Jack Wilshere, with many of the belief Patino is more advanced than the ex-Arsenal star was at his age.

It has been a steep ascent for the teenager, who only made his debut for the club’s under-23’s last month. Injury to Granit Xhaka could even open the door to a possible role for Patino in the coming months, with Arsenal short on options in the middle of the park. But Arteta is adamant he won’t rush him before he’s ready.

“He’s been training well with us and he played a practice game with us and was good,” the Spaniard said. “So, give us time and we will prepare him.”