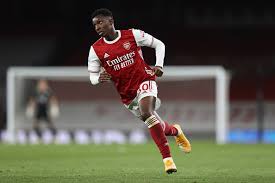 Danny Mills has blasted Eddie Nketiah after a report revealed the reason why the Arsenal striker failed to seal a transfer to Crystal Palace.

The 22-year-old is one of several players whose exits from the Emirates Stadium were on the cards. But while the likes of Joe Willock and Lucas Torreira got moves away, Nketiah has stayed in north London. Still, he was not short of potential suitors. New Palace boss Patrick Vieira eyed his services.

But despite Arsenal reportedly showing willingness to lower their demands for him, the move never took off. According to talkSPORT, that is because Nketiah did the opposite with his wage expectations. Indeed, Palace did not want to take on his salary and the move fell through.

Instead, Palace turned their attentions to Odsonne Edouard and got a deal for the ex-Celtic striker over the line. Reacting to the developments, pundit Mills said of Nketiah: “He’s daft, that’s what it is.

“He’s being badly advised. Sometimes you have to take a step backwards to take two steps forwards.

“You have to back yourself and say: ‘You know what, it’s not really what I want right now, I might have to take a little bit of a cut, but I’m going to go there.

“‘And then Palace aren’t going to be able to keep hold of me because there will be too many clubs in for me’.”

As it stands, Nketiah’s chances of game time this season under Mikel Arteta look slim. While he is currently out with an ankle injury, he finds himself down the pecking order.

Pierre-Emerick Aubameyang and Alexandre Lacazette remain the senior options upfront. Meanwhile, Gabriel Martinelli is looking to prove himself after his own injury struggles.

“I think that’s very naive, because what will happen is you’ll have this season where you will do absolutely nothing, you end up on a free transfer and everyone is going, ‘well, you’ve not played for a year, you don’t really know what you’re doing’,” Mills added. “You’re always best to go out and play, no matter what.”

Nketiah’s future painted part of a turbulent summer transfer window for Arsenal. They may have performed an overhaul including a goalkeeper and two new centre-backs, but Ainsley Maitland-Niles is one player who has been left feeling disgruntled.