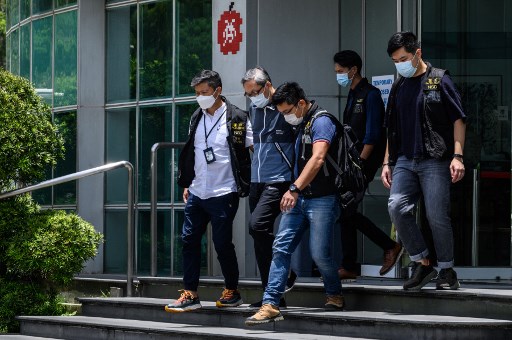 Hong Kong police raided the pro-democracy newspaper Apple Daily and arrested five senior executives on June 17. All were charged under the controversial national security law and accused of colluding with foreign forces to endanger national security.

The International Federation of Journalists (IFJ) condemns the charges calls for their immediate release.

Journalists’ materials within the office were also seized during the raid and an estimated $2.32 million of assets belonging to Apple Daily, Apple Publishing and AD Internet Limited were frozen.

The Apple Daily executives are accused of breaking Article 29 of the national security law, which prohibits “collusion with a foreign country or with external elements to endanger national security.”

Hong Kong’s senior superintended of its national security unit, Steve Li, accused Apple Daily of publishing 30 articles, in both Chinese and English, that allegedly pursued foreign sanctions since 2019.  At a press conference at 10 am on June 17, Li, said, “The questionable articles play a very crucial part in the conspiracy.”

Since the law was implemented in June 2020, IFJ has documented that it has been used to arrest over 100 pro-democracy figures. Apple Daily founder, Jimmy Lai, was the first high-profile target in the campaign of intimidation against Apple Daily operations when he was arrested in August 2020 on suspicion of violating the national security law.

Lai faced two further charges on counts of organising an unauthorised assembly, for which he pled guilty following his participation in mass pro-democracy protests. Lai is now serving a 20-month prison sentence.

IFJ said in statement, “This is an outrageous attack on a voice for independence and democracy in Hong Kong and follows a sustained campaign of intimidation against Apple Daily since the National Security Law was imposed upon the people of Hong Kong. The excessive show of force by Hong Kong police in descending on Apple Daily’s operations is a disturbing development and shows the great lengths to which authorities are prepared to silence critical reporting in Hong Kong. This attack defies all international human rights principles and represents a dire low point in its Hong Kong’s media history. Journalism is not a crime.”