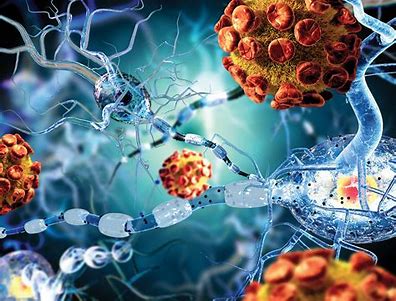 The female immune system has developed a complicated strategy that enables it to fight off pathogens without endangering the foetus, says Melissa Wilson, a geneticist and evolutionary biologist at Arizona State University in Tempe.

At various stages of pregnancy, she says, the body seems to ramp up and turn down the immune response. As the body prepares for pregnancy, for example, inflammation increases to allow implantation of a fertilised egg. This inflammatory response resembles how the body reacts to an open wound and could help to explain why many women feel unwell in the first trimester, according to some research.

During that period, the embryo needs to break through the lining of the uterus, damage the tissues there, take over some of the mother’s blood vessels, and establish blood supply to the foetus through the placenta. Inflammation aids this process of damage and repair, along with the removal of waste products.

Inflammation drops during the second trimester and then increases again in the third, especially as birth becomes imminent. The placenta itself produces the oestrogen hormone oestriol, which has such powerful anti-inflammatory effects that clinical trials are under way to assess its ability to treat women with multiple sclerosis (MS).

Many questions remain about how pregnancy affects the immune system and the interaction with the placenta in particular, Wilson adds. “We try to tell a simple story, but the truth is it’s not simple and we don’t understand it well,” she says. “The more we understand, the more we realize how mind-boggling it all is.”

The evolution of the placenta might have driven some of the sex differences in autoimmune disease that are now being uncovered, Wilson and her colleagues proposed in a 2019 paper. However, the female system evolved over hundreds of millennia during which people were pregnant for much of their reproductive years. Because people have fewer children now than their ancestors typically did, their bodies do not interact with a placenta as frequently.

Without regular placental influence to keep the female immune system in check, the researchers suggest, autoimmune attack might be more likely.

In urban, industrialised populations, women exhibit a higher prevalence of autoimmune disease than do men, and those trends might reflect hormonal shifts as a result of urbanisation and a move towards more-sedentary lifestyles, Wilson’s team proposes.

Autoimmune diseases have increased in incidence in recent decades, and rates are highest where increased use of contraception has reduced the number of pregnancies. Sedentary lifestyles also affect reproductive hormone levels.

Unanswered questions remain, including whether women who have fewer or no children have an elevated risk of autoimmune disease. Wilson is also planning to investigate whether the age a person is when they have their first baby affects the likelihood of disease. It’s possible, she says, that getting pregnant earlier in life might be protective.

Working out the details could lead to new treatments – if researchers were to find that oestriol is really important, for instance, then Wilson speculates that the hormone could be used as a preventive therapy for young people. “That time window might be important for reducing risk of autoimmune disease,” she says.

Theories such as these make sense, Rhonda Voskuhl, a neuroimmunologist at the University of California, Los Angeles, and president of the interdisciplinary Organization for the Study of Sex Differences, says.

From an evolutionary perspective, it would have been beneficial for mothers to be able to stay healthy while also carrying pregnancies to term. “The women need to survive to take care of the babies,” Voskuhl says. “The babies that had mothers who had active immune systems – they lived and perpetuated that particular pattern.”

Back in the 1990s, as Voskuhl was beginning to insist on studying male and female mice side by side, some researchers in other fields were taking similar steps. At first, these groups were working mostly in isolation.

Over the years that followed, enough research accumulated to legitimize the idea that there were biological forces at work. In 1996, for example, Voskuhl established that female mouse models of MS are likely to be more unwell than are male models. That made it harder to support the outdated argument that women simply complain more about the same symptoms, she says.

In 2001, a landmark report called Does Sex Matter? was released which recommended prioritizing sex differences in biomedical research7. In 2006, a group of researchers from the Society for Women’s Health Research founded the Organization for the Study of Sex Differences to connect specialists across disciplines, aid research and promote discoveries. Those structural developments happened alongside another trend, Voskuhl says: a rise in the number of women who were establishing themselves in the top tiers of science.

By 2016, the NIH had created a policy to encourage the inclusion of ‘sex as a biological variable’ into research design. Over the past three years or so, the topic of sex differences in disease has finally made it to the main stage, says Voskuhl, who has seen grants and publications increase exponentially. She now gives talks at major MS meetings.

But the study of sex differences in autoimmune disease and other conditions still faces significant obstacles, Fairweather says. One such problem is the ubiquitous use of plastic in laboratory experiments. In their recent research, Fairweather and her colleagues found evidence that the chemical BPA – a hormone-disruptor commonly found in plastic water bottles and animal cages – altered the effect of sex hormones on disease.

Researchers don’t usually pay attention to the sex of the cells they use in studies, she adds, even when they use plastic Petri dishes and culture trays, that they put in warm incubators with indicator dyes that also act as endocrine disruptors. “This has been affecting everyone’s experiments in a sex-specific manner,” she says.

Diversity among researchers is another challenge, Voskuhl says. Most scientists working on sex differences in disease are women, and many researchers still consider the topic to be ‘a women’s issue’. Voskuhl’s group is actively trying to draw broader interest. “We’re making a drive for diversity on all fronts, and that includes getting more men involved,” she says. “We want them represented and we want to bring them in.”

Looking back on 25 years of progress, Voskuhl marvels at how far science has come in understanding autoimmune diseases. Several research groups are now formulating strategies for using those insights to make people’s lives better, including research on how hormonal treatments could slow cognitive decline in people with MS.

“Sex differences in many autoimmune diseases have been well characterized at the clinical level, and mechanisms underlying them have been discovered,” she says. “The future holds great potential for new treatments based on these discoveries.”