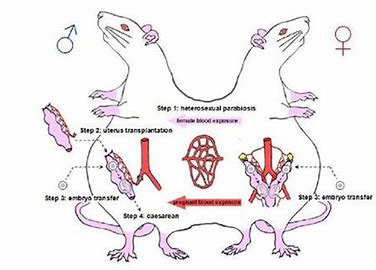 An experiment to impregnate male rats stitched to female rats, by researchers at the Naval Medical University in Shanghai, has stirred debate in China and beyond about the ethics of the work.

Researchers say the experiment was highly contrived and unnecessarily distressing to the animals, and that it offers few insights into the possibility of pregnancy in people assigned male at birth – if anything, the poor success rate suggests that such a goal is a long way off.

But other scientists say the rat model could eventually be used to gradually tease apart what might be required to maintain pregnancy in people of any sex who wish to bear children. The study was detailed in a bioRxiv preprint posted online on June 10.

“The experiment has no social value and just wasted the money taken from taxpayers,” says Qiu Renzong, a bioethicist at the Chinese Academy of Social Science in Beijing.

The paper has been particularly hotly debated among scholars and the public in China, where it was recently among the top-trending subjects on the Chinese social-media platform Weibo. Some researchers in China fear that reckless biological experimentation could blemish the country’s reputation.

Chinese scientists are concerned that controversial research, such as this study, could reinforce an “already tainted image of Chinese science”, says Joy Zhang, a sociologist at the University of Kent in Canterbury, UK, who has conducted research in China over many years. The study is one of several in recent years that Chinese researchers feel have presented a “distorted image” of what they believe China’s research culture should be, she says.

In one high-profile case from 2018, a Chinese researcher announced the creation of the first genome-edited babies, which was widely criticized as highly unethical. The incident spurred efforts to strengthen ethical governance in China, including the formation of a national committee to advise the government on research ethics.

“There is also a deeper worry that the undying trend of ‘science through public relations’ – the mentality that experiments with outlandish objectives are a shortcut to public attention – would turn science into a form of entertainment business rather than a serious and responsible academic endeavour,” says Zhang.

It is not clear whether the pregnancy experiment was approved by an independent ethics committee — a requirement for all publicly funded experiments involving laboratory animals – says Zhang Xinqing, a bioethicist at Peking Union Medical College in Beijing. Zhang adds that if it had been up to him, he would not have voted to approve this experiment.

The authors declined to comment on questions about the research from Nature. They stated in their manuscript that the work could have “a profound impact on reproductive biology”, but did not clarify why. In a public statement on PubPeer, a website for post-publication peer review, one of the authors, Zhang Rongjia, said the work was performed “for our personal interests and curiosity”, and that they made efforts to reduce the number of animals used and to minimize their pain.

Pregnancy in males is extremely rare in nature, and is observed only in a group of fish that includes seahorses and pipefishes. To study the possibility of achieving it in mammals, the Chinese researchers sewed the elbows, knees and skins of pairs of rats together, each consisting of a castrated male and a female, to join their blood supply. This conjoined model, known as a parabiont, allows the animals to share blood.

Parabiosis is an established surgical technique for connecting animals to study the effects of infusing blood from one to the other — for example from an elderly mouse to a youthful one to study the process of ageing.

Six weeks after the castration and surgery, testosterone levels in the male rats had significantly declined — but their levels of oestrogen and progesterone mirrored those in the female rats.

Eight weeks after surgery, the researchers transplanted a uterus into each male rat, followed by embryos into both the male and female after another eight weeks. Three weeks into the embryos’ development, and near the end of a normal rat pregnancy, the researchers delivered the pups by caesarean section.

The authors say the findings point to the importance of the pregnant female’s blood supply, because the embryos did not mature in males that were attached to females without developing foetuses. The importance of the blood supply and the low rate of births suggest that “male pregnancy in humans is not feasible at this stage”, Zhang wrote on PubPeer, adding: “If our result is correct, this is almost a death sentence for human male pregnancy.”

But other researchers say the importance of a mother’s endocrine system is already common knowledge.

The study offers limited insights, says Chris O’Neill, a retired researcher formerly based at the University of Sydney in Australia, who has studied the biology of pregnancy. The model is effectively an ex vivo model of female pregnancy, he adds: a female uterus and blood supply within a castrated male. “It tells us that at least within the castrated male, there is no fundamental hostility of the male environment to carrying a foetus,” he says.

The intrusive surgical intervention also doesn’t lend itself to being applied to people, says Catherine Mills, a bioethicist at Monash University in Melbourne, Australia. “It is quite a long way from any real implication for human research,” she says. “In a sense, it is not an animal model; it is just an animal experiment.”

Study co-author Zhang declined to comment on the criticisms of the value of the work, stating in an e-mail to Nature that the authors “prefer to respond to external criticism by formally publishing academic papers”.

O’Neill says the study might provide a new experimental model for identifying nutrients or hormones in maternal blood that are crucial for a successful pregnancy.

There could be implications for other reproductive research in people as well. Some groups are already considering the possibility of uterine transplants in transgender women, says Mats Brännström, a reproductive-health researcher at Gothenburg University in Sweden, who led the first clinical trial of such a transplant in cisgender women without functioning uteri.

Animal experiments such as the one by the Chinese researchers could be a first step in establishing the safety of such surgeries, says Brännström – and the findings offer a sense of the great challenge of such a task.

But others question whether there is any value to pregnancy in people assigned male at birth at all. “There may be some limited applications where trans-woman want to be able to gestate a child,” says Mills, but otherwise, “what is the therapeutic need?”