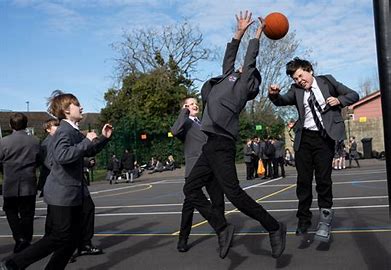 On a bright, crisp morning in March, Salah Goyut said goodbye to his stuffed tiger, Stripes and his cat, Meowington and started walking the two short blocks to Herbert Schenk Elementary School in Madison, Wisconsin. He had started kindergarten there months ago, but he had only seen his teacher on a computer screen.

This would be his first day inside the school. He looked tiny in his NASA mask and raccoon hat, which he had pulled down over the hood of his coat. He felt shy and a little nervous about the transition from ‘zoomie’ to ‘roomie’.

Outside the school, carefully chalked messages lined the pavement: “We can’t wait to see you!” and “Welcome Ks”. Signs directed parents to “Drop your shark off here” and “Hug and kiss goodbye here”. Salah hesitated briefly, then made his way to the open double doors.

Back in March, the decision to reopen Schenk and other shuttered schools across the United States sparked heated debate. The US Centers for Disease Control and Prevention (CDC) had announced that schools could reopen safely without driving up community spread or putting teachers and students at risk, as long as steps were taken to mitigate transmission of the virus. But that did little to calm the anxiety among parents, school staff and even scientists. It sometimes spilled into public arguments.

Monica Gandhi, an infectious-disease researcher at the University of California, San Francisco, often tweets about Covid-19 and schools, but she took a break in March. The discourse became too emotional, especially when people lobbed horrible accusations at her.

“There is one thing that always ends an argument,” she says. That’s “the statement that you would want children dead”.

Now, as the academic year wraps up in many countries, school administrators are taking stock of their experiences and looking to public-health officials to help them plan for the coming school year. In the United Kingdom, children returned to school in March and April.

In France, a third Covid-19 wave shuttered schools briefly around that time, but pupils were back in class by May. In the United States, more than half of all school districts had resumed full-time instruction by early June, and nearly all offered at least some in-person learning.

But across the world, 770 million children still weren’t going to school full time by the end of June 2021. And more than 150 million kids in 19 countries had no access to in-person schooling. They were either learning virtually or had no schooling at all. Even when schools open back up, many kids won’t return.

The United Nations cultural organisation Unesco estimated last year that around 24 million schoolchildren will drop out as a result of the pandemic. Because they provide so many essential services in addition to learning, schools should be the last to close and the first to open, says Robert Jenkins, chief of education for the UN children’s charity Unicef in New York City.

“There are many countries in which parents can go out and have a nice steak dinner, but their seven-year-old is not going to school,” he says. “That’s a problem.”

A growing body of evidence suggests that schools can be opened safely. But that hasn’t quelled debate over whether they should be open and, if so, what steps should be taken to limit the spread of the virus. By September, when schools in many parts of the world will open again, fresh concerns and debates will be in play. Many teenagers and preteens will have been vaccinated in the United States and other wealthy countries.

But in some low- and middle-income countries, vaccine access will still be limited. Younger children will probably still be in the queue in most parts of the world. And the virus continues to mutate and evolve.

“The big unknown is a new variant,” says Christina Pagel, a mathematician at University College London.

In March 2020, when many schools shut their doors, little was known about SARS-CoV-2. “We closed schools early, not only to help flatten the curve, but also because for most respiratory illnesses, children are the most at risk,” says John Bailey, a visiting fellow at the right-leaning American Enterprise Institute think tank in Washington DC who recently reviewed the literature on schools and Covid-19.

Scientists soon discovered that kids are the least likely to develop serious illness, but it wasn’t yet clear whether children were as susceptible to infection as adults and whether kids who did get infected could pass the virus on to others. Some researchers worried that sending children back to school might fuel the pandemic. But the debate soon shifted from a scientific one to a political one.

“Schools must open in the fall!!!” tweeted then-President Donald Trump in July 2020. “That became a partisan moment,” Bailey says. “So many of us we were wired to not believe anything the president was saying.”

Tracy Høeg, an epidemiologist at the University of California, Davis, agrees. “It suddenly became sacrilegious for anyone in science to say it was OK for schools to be open,” she says.

Some of the political divisiveness was inevitable, says Ellen Peters, a decision researcher and director of the Center for Science Communication Research at the University of Oregon in Eugene. People who are conservative have different world views from people who are more liberal. But “Trump so vastly exacerbated that”, she says.

Other countries weren’t immune to the squabbling. When Danish primary schools reopened in April 2020, some parents worried that their kids were being used as guinea pigs. In France, where schools have mostly remained open, teens protested last November, saying that Covid-19 protections inside classrooms were inadequate.

In some districts, teachers failed to show up as the coronavirus swept through communities. And parents were reluctant to report cases because they would have to isolate at home with their children and might lose their jobs.

In Berlin, authorities scrapped plans to partially reopen schools in January, in the middle of a national lockdown, after backlash from parents, teachers and government officials.

One sticking point was the issue of prioritising vaccines. When schools began to open up in March and April, the vast majority of teachers hadn’t yet been vaccinated. That made weighing up the risks and benefits particularly tricky.

“The biggest risks are for the adults in the school system,” says Jennifer Nuzzo, an epidemiologist at the Johns Hopkins Center for Health Security in Baltimore, Maryland. “And the benefits of being in the classroom are for the kids.”

Equity also became a flashpoint in the debate. Researchers argued that remote learning would widen disparities between white students and students of colour in many countries.

“The fear is that achievement gaps will become achievement chasms for those kids,” says Robin Lake, director of the Center on Reinventing Public Education, a non-partisan research and policy analysis organisation in Seattle, Washington. And kids of colour aren’t the only groups that have been forgotten, Lake says. “We also know that students with disabilities have been left behind, and kids with other complex needs.”

In the United States, however, surveys showed that families of colour didn’t necessarily want in-person schooling. When schools did open, these families were among those least willing to send their kids back. That’s not surprising, says Durryle Brooks, a social scientist at Johns Hopkins University and policy chair for the Baltimore City Board of School Commissioners.

“Systems have continually failed Black and brown people in this country,” he adds. Why would that trust suddenly appear now? And sending pupils back to in-person school wouldn’t fix the achievement gap. “In Baltimore City, Black students have been underperforming” for a long time, even before the pandemic, Brooks says.

Now, more than a year after the pandemic began, researchers know a lot more about Covid-19. And they know more about how the disease does (and doesn’t) spread. Although some kids and teachers have caught SARS-CoV-2, schools don’t seem to be environments where transmission is rampant. “The rates in the schools have not been higher than in the community,” Høeg says.

Tracking cases in schools is relatively straightforward. But what public-health officials really want to know is whether students and staff are spreading the virus on school grounds, or just bringing in cases they acquired elsewhere. That’s trickier to tease out.

One of the largest studies on Covid-19 in schools in the United States looked at more than 90,000 pupils and teachers in North Carolina over 9 weeks last autumn. Given the rate of transmission in the community, “we would have expected to see about 900 cases” in the schools, says Daniel Benjamin, a paediatrician at Duke Clinical Research Institute in Durham, North Carolina, and co-lead author on the study. But when the researchers conducted contact tracing to identify school-related transmissions, they identified only 32 cases.