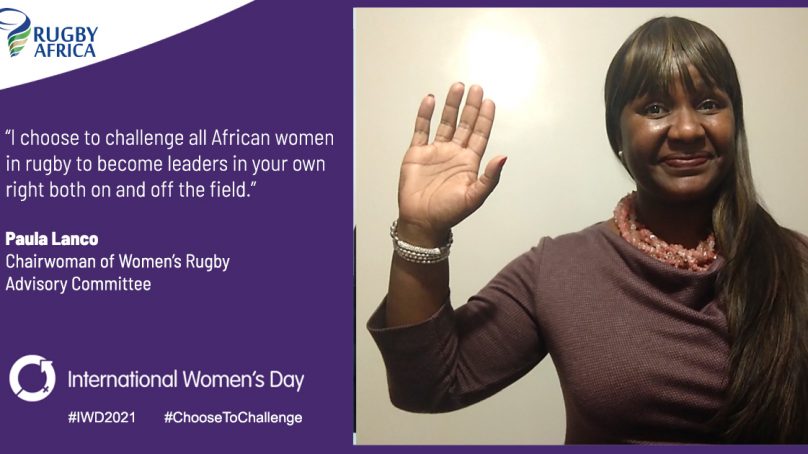 As the world celebrated International Women’s Day and the dynamic women who have and continue to excel in their fields in all industries, it is fitting that we celebrate one of the leading women in Rugby Afrique Paula Lanco – a Rugby Afrique executive committee member and chairperson of the newly formed Women’s Rugby Advisory Committee (WRAC).

In this Questions and Answer session, Paula takes us on a journey to where she is today and gives other women aspiring to follow in her footsteps advice on what it takes to become a true leader.

Question: As a Rugby Africa executive member and chairperson of the Women’s Rugby Advisory Committee (WRAC), what significance does International Women’s Day have for you?

Answer: It’s a very important day, especially for women in leadership. It’s a time to take stock of our progress, to review what’s working and to restructure to achieve better and stronger performances in the future.

It is also a time to celebrate those that have and continue to do so much for our game, including the men that stand by us and in our case being led by our President Khaled Babbou and Vice President Andrew Awor, among other members of the Rugby Africa executive committee and management.

It is a day to recommit, to embrace, support and champion the women’s agenda on and off-pitch.

Question: What inspires and drives you in the roles you currently occupy in rugby?

Answer: I believe in the power of action, especially when it appears as though the odds are against us. This is greatly evidenced by the impact the benefactors of our women in Leadership Scholarship have and continue to deliver at local level, and more so the rising number of Union Women Presidents and Vice Presidents in Africa.

I believe in the power of sports to change and touch lives for the better and that can be seen in the many ‘Beyond Sports’ initiatives we’re rolling out this year especially through our women’s rugby ambassadors, the Unstoppables.

Equally important, I believe in the power of women to deliver and their ability to rise to the occasion when called upon, and as such the excitement in the co-option of more women in rugby leadership in our WRAC committee and subcommittees.

This aspect drives and inspires me to do and want more for our women in rugby and my continued quest to push for a brighter future for both our girls and women on and off the field.

How long have you been involved in rugby, and give us a brief description of journey to this point?

I was first co-opted as a member of the first ever Kenya Rugby Union (KRU) Women’s Committee in 2011 and following this I was co-opted as a KRU board director and placed in charge of Women’s rugby in Kenya.

In 2013 we made history as a Union when I was appointed the first woman to be duly elected, and as such, I shattered the glass ceiling, paving the way for more women to join in their own right as duly elected members.

I also chaired the community rugby committee and served on the finance & admin committee during my time at the KRU.

I finished my term in 2017 and upon my exit from the KRU Board, I launched RUCKiT Girls Rugby Kenya in 2017 as a means of continued involvement in the growth and development of the girls’ game at the grassroots level.

I continue to do so and this year we launched the RUCKiT Queens Women’s rugby team that made its maiden appearance in the recently launched KRU Women’s Festival on Sunday, February 28.

In 2019 I was duly elected as a member of Rugby Africa and in August 2020 I was elected by the Rugby Africa executive committee to form and chair the first-ever Women’s Rugby Advisory Committee.

It has been a humbling journey filled with many life lessons, great learnings and also great memories.

We travelled the world representing our sport and flying our country’s flag with pride. What few people ever see though is the blood, tears and sweat it took to build the brand that stands proudly today as Kenya Lionesses and that makes for a special bond between me and the players to date.

While you lead and are judged by the public when it comes to rugby, I learned to manage privately, which on many occasions had me greatly misunderstood.

This strategy, however, served to keep me focused and as at the time of my exit, we were participating in international invitational games; had launched the historic 7s girls’ tournament in our public secondary schools; had over 2,000 girls and women playing rugby; formed 10 women’s clubs and sides, and rolled out our women’s local league. We also hosted the first ever Women’s Confederation of African Rugby (CAR) tournament in the East African region and through God’s grace our girls participated in the inaugural 2016 Olympic Games.

To crown it all, in 2014 and 2015 both Rugby Africa (then CAR) and World Rugby recognised Kenya Women’s Rugby as the best run in the region. This was further affirmed by the Women’s SOYA (Sportsperson of the Year Awards) 1st and 2nd placings in 2013 and 2014. I can truly say that while the journey may not be easy, it is certainly well worth it.

Question: What do you love the most about rugby?

Answer: Our ability to use the sport, especially when you start them off early as an entry to communities and to touch and impact lives for the better.

Much like music, sport is a universal language and especially rugby, and what a great tool it is to introduce rugby as a way to build confidence and to help shape our next generation of players, while at the same time building character.

Question: What advice would you give women aspiring to take up rugby as players or in leadership roles?

But despite this and looking back at how far we have come in Women’s rugby, I say to you, look at those that have gone before you and draw courage in that. Stay true to your intentions, to your calling, to your game and stand to be counted because you can and because you have a right to be here.

Question: What is your vision for women in rugby in the next 10 years?

Answer: To borrow the words of Maggie Alphonsi, ‘Rugby is a Sport, Not a Gender’.  As such my vision is to see the Africa women in rugby compete on the world stage, and equally importantly that both our girls and boys enjoy equal pay, preparation and opportunity – both on and off the field.