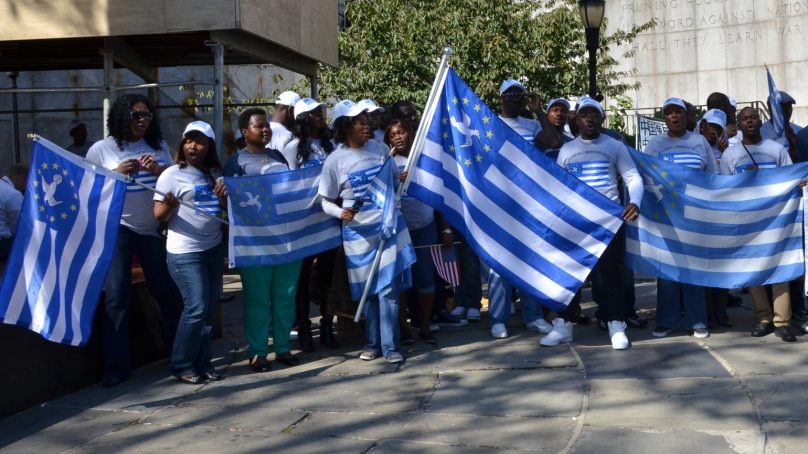 Sometime during that week, an official in the detention camp in Cameroon accosted Julliana Essengue and ordered her to have sex with him. “I said no,” she told me. “When I refused, he forced me, and he slept with me. And later, his colleagues came and did the same thing. They raped me. There were two policemen that took me in another room and slept with me there. From there, I don’t know what was happening with me. I was feeling sick. All my body was paining me.”

Essengue recalls seeing her uncle at the camp – he had found it while searching for her, hoping to explain to the officials that she was naive, not political. Essengue isn’t sure how many days passed after she was raped before the military released her.

Her uncle paid 500,000 Central African CFA francs, the equivalent of about $830 then, to free her. She was told to leave Cameroon. If she didn’t, the military officials said, she might end up being taken to Yaoundé, Cameroon’s capital. “At that time,” she explained, “they were taking people to Yaoundé, and people were not coming back.”

Essengue returned home with her uncle, initially to receive medical attention from a neighbour who was a pharmacist. Then, with help from the pharmacist and her uncle, she departed from Cameroon by bus, leaving her two children behind, entrusted to her mother’s care. Essengue crossed into Equatorial Guinea.

Although she had her passport, she did not enter the country legally, instead following instructions from her neighbour to stay with a contact. But this meant she could not find work and was afraid to leave the contact’s compound. Immigration authorities were scouring the country for Cameroonians like her.

Essengue couldn’t keep living like that, and her uncle and neighbour in Cameroon again helped, purchasing a plane ticket to São Paulo for her in late October 2019. With Brazil’s implementation of a relatively progressive migration law in 2017 and its strong diplomatic relations throughout Africa, the country became a viable option for asylum seekers from across the continent.

Essengue, however, spoke no Portuguese, didn’t know anybody there, and had no idea where she could stay.

On the flight to Brazil, Essengue connected with a fellow passenger. “I saw one African guy from Sierra Leone. So he told me that he had been in Brazil, and I explained to him that I’m coming to Brazil, and I don’t know anybody,” she said. “He told me that there’s a Catholic Church that is receiving people.”

Once they arrived in São Paulo, the man offered to share his cab ride, which Essengue gratefully accepted. She was received by the organisers of a church-sponsored shelter that offers food and sex-segregated lodging for migrants for up to three months. But as the weeks went by, Essengue was unable to find work. As she tells it, as soon as the residents of São Paulo realised that she didn’t speak Portuguese, they would ignore her. As her three-month deadline at the shelter drew closer, she worried about remaining in Brazil.

“My head was heavy. Where am I going if I don’t have enough money to rent a house?” she said. “Other ladies were saying they want to travel, that when you go to America, you find peace, and there they speak English.”

Essengue was excited by how other migrants described the United States. She contacted her uncle and told him she wanted to try to make the journey. He and a circle of friends raised all the money they could, and with that, in January 2020, Essengue left for the US with some of the women she’d met at the shelter. They were not certain of the routes or their documentation or whether they had enough money. As far as Essengue was concerned, though, getting to the US was her best chance of survival.

Then Essengue met Dalmacy, 43, who had been living in Brazil, first from 2013 to 2016 and then again from 2017. Dalmacy planned to live in the United States for a second time. After he made it across the border in 2016, he said he filled out some paperwork and was allowed to stay in the US – with conditions.

According to Dalmacy, he was given a GPS ankle monitor to wear for three months and told to check in at the Immigration and Customs Enforcement office in Tampa, Florida, every month. But 11 months later, during one of his ICE visits, an officer informed Dalmacy of a letter he was supposed to have received to see a judge.

Dalmacy said he never received the letter, and after that he was detained. Dalmacy did not have a lawyer, and ICE deported him shortly thereafter. Remaining in Haiti, however, was out of the question. “

The gangs nowadays invade people’s houses and shoot people,” he told me. “And that happens every day in Haiti. It is the gangs that hold power.”

A few months after his deportation, Dalmacy returned to Brazil. Unlike Essengue, he speaks Portuguese, and with approximately 85,000 Haitians migrating to Brazil between 2010 and 2017, he also had a community. Still, he had family in the United States, and as the economic boom that brought Haitians to Brazil in the early 2010s came to an end, anti-Haitian sentiment rose. Dalmacy said he also felt unsafe due to street violence and imagined he could find a safer life in the United States.

Dalmacy and Essengue don’t know precisely what first drew them to each other. She is 17 years younger than him. Though he’s fluent in Creole, Spanish, and Portuguese, his French is limited and he speaks little English. Essengue is fluent in English, Cameroonian Pidgin, and French—the language they use to communicate, though in a form only the two of them fully grasp.

The pair met at the Brazil-Peru border after law enforcement stopped the vehicle they were in. Following that encounter, Dalmacy, Essengue, and a few others travelled by bus from Peru to Ecuador. By the time they arrived in Colombia, Essengue had run out of cash, but Dalmacy came to her aid. To continue their trek, they each paid $40 for passage across a river and waited three days by its bank for the waves to calm before crossing.

Despite this prudent decision, they did not avoid danger. When they were on the water, the boat nearly capsized. “‘I’m going to die. They will not see my body anymore,’” Essengue said she thought to herself. “The water at that place, I don’t know if it’s black or blue.”

Essengue said the turmoil lasted 10 minutes, during which time everybody prayed. Had the waves been larger that day, she added, they would have sunk. When they made it across, they were still in Colombia, with a jungle and mountains ahead. Essengue did not know it at the time, but she was about to travel through the Darién Gap between Colombia and Panama – one of the world’s most treacherous journeys, with crocodiles in the rivers and bandits on the ground.

From Africa to the Americas: The odyssey of a black migrant running away from war in Cameroon