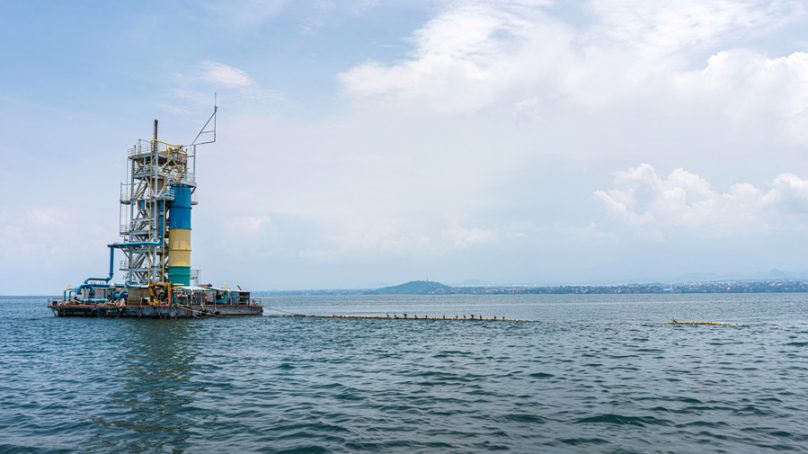 If Kivu were to experience a limnic eruption, says limnologist Sally MacIntyre, “it would be completely catastrophic.”

And the spread of the lava from Mt Nyiragongo that erupted recently is testimony to the fears expressed by MacIntyre, a researcher at the University of California, Santa Barbara.

This isn’t just a theoretical concern. Scientists have found what may be evidence of at least one previous limnic eruption at Kivu that likely occurred between 3,500 and 5,000 years ago, and possibly several more recent ones.

Sediment cores taken from the bottom of the lake have revealed features known as brown layers that are unlike the surrounding sediments. These sediment bands are “very unusual, organic-rich layers,” says limnologist Sergei Katsev of the University of Minnesota Dulut, that may be the result of eruptions.

Limnic eruptions can occur for two reasons. If the water becomes completely saturated with dissolved gases, any additional carbon dioxide or methane injected into the lake will be forced to bubble out of solution, rise and be released into the air. Eruptions can also be caused when something forces the deep water with its dissolved gases to mix with the layers above, reducing the pressure on the gases and allowing them to quickly come out of solution and escape, similar to the effect of shaking a can of soda and then opening it.

The KivuWatt project, launched at the end of 2015, seeks to pump gases trapped at the bottom of the lake to harvest methane for energy production. Once fully online, the plant will produce more than 100 megawatts of power for Rwanda, helping the country to reach its ambitious goal of providing electricity to the entire population by 2024.

While a landslide of the scale suspected in the Nyos eruption might not cause enough mixing at Kivu, due to the lake’s size and depth, there are several other possible triggers. Kivu is in a seismically active area, so an earthquake could generate waves in the lake that would mix the layers enough to release the trapped gases.

Climate is also a potential culprit. At least one past eruption discovered in the sediment record appears to have been caused by drought that evaporated enough water from the top of the lake to reduce the pressure at the lower levels and release the dissolved gases.

Lowered water levels during dry periods could also leave Kivu more vulnerable to disruption from particularly heavy rain events. They could flush enough built-up sediment from the dozens of streams feeding into the lake to cause the layers to mix, MacIntyre says.

The chances of such a sequence of events may go up as the planet warms, MacIntyre says. Climate change will bring more rain to East Africa, and “it’s going to come in the form of more extreme rain events with bigger intervals of drought in between.”

Another possible trigger is volcanic activity under the lake or from surrounding volcanoes, but scientists think the risk of that is low. A 2002 eruption of nearby Mount Nyiragongo didn’t bring in enough material to disrupt Kivu’s bottom layers. And modelling studies have shown that volcanism below the lake wouldn’t cause a big enough disruption either, MacIntyre says.

Whatever the culprit, the effect would be the same: Accumulated gases are released from their dissolved state, creating dense clouds of carbon dioxide and methane that, as happened with the carbon dioxide at Nyos, could displace oxygen and asphyxiate people and animals alike. And if enough methane is released into the air at Kivu, there is the additional risk that it could ignite.

Katsev says that the lake is monitored regularly for signs of upticks in gas concentration, so a sudden upwelling “will not catch us by surprise.” More than a dozen seismic stations measure the activity near the lake in real time as well.

And in 2001, an effort began to reduce the risk of another disaster at Nyos by siphoning water from the bottom of the lake through a pipe to the surface, where the carbon dioxide is released into the air at a safe rate. Similar efforts are underway at Kivu.

As gas concentrations rise in Kivu’s depths, so does the risk. Wüest and colleagues found that from 1974 to 2004 the concentration of carbon dioxide increased by 10 per cent, but the bigger concern at Kivu is the methane concentration, which rose 15 to 20 percent during the same period.

There may be a way to turn Kivu’s risk into reward, though. The same gas that could fuel a deadly natural disaster has potential as a renewable energy source for the region. In 2008, Rwanda launched a pilot programme taking methane from the lake to burn as a natural gas and last year signed a contract to export bottled methane. A much larger program, called KivuWatt, came online in 2015.

The projects pump water from the deep layers of the lake and as the pressure is reduced on that water, the gases are released. The methane is extracted to be used as fuel, and the carbon dioxide is pumped back down to the bottom of the lake.

“They take this gas, ship it via pipeline onshore and burn it the way you would burn fossil fuels to generate electricity,” Katsev says.

This harvesting might help to reduce the risk from accumulated gas in the lake, though it won’t eliminate it. Still, for a lake with that much danger lurking below, anything helps. And for the region around the lake, it could be an important source of energy. Once KivuWatt is fully online, the 100 megawatts of power produced by that project alone will make a significant difference for Rwanda, a developing country that is aiming for universal access to electricity.