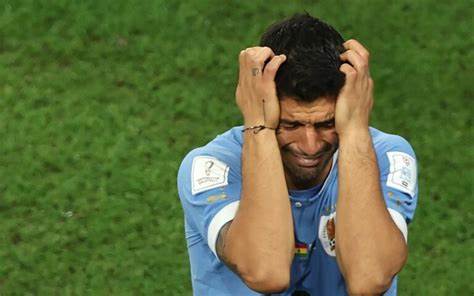 The fiery encounter between Ghana and Uruguay in World Cup group match had all the ingredients the tale of the Kilkenny cats. It was a brutal slugfest for a slot in the round of 16 at the ongoing Qatar World Cup that neither secured despite the South Americans wining by two goals.

At the end of the Uruguay-versus-Ghana last group match, there were not many sharing Luis Suarez’s tears at Uruguay’s departure from this competition. The South Americans, as is usual at World Cups, have won few friends along the way.

One of the intriguing adjuncts of this World Cup has been the way in which the huge South Asian migrant labour force in Qatar has adopted the visiting teams. You see Indians in Brazil shirts, Bangladeshis in Argentina colours, chaps in Spain and England tops. None of them has been seen in a Uruguay shirt.

There is a reason for that: nobody wants to associate with a team that has long traded in football’s dark arts, the team that, in 2010, cheated the underdogs Ghana of the chance to be the first African nation to reach a World Cup semifinal.

And, as they faced up to a Ghanaian side keen for revenge, Uruguay made no attempt to occupy the moral high ground. Rather they were at their singular worst, full of relentless subterfuge and underhand behaviour. Here were some of their tricks. Or at least some of those visible from a distance.

Knowing Ghana’s history with the player from 2010, this was Phd level trolling. There he was before kick-off, all smiles and cheery bonhomie, patting opponents on the chest convivially as he worked the line of Ghanaians, proffering the very hand that denied them in Johannesburg twelve years ago, knowing full well its significance for his opponents. It was ostentatious villainy. Particularly since he has not always been that jolly at pre-match hand-shakes.

When Daniel Siebert, the referee, was dispatched to the video screen and came back to award Ghana a first half penalty, the fully choreographed Uruguay response moved into action. Siebert was surrounded, there was coordinated delay, fuss, a collective effort to undermine the referee’s authority and confidence.

While that was going on, Darwen Nunez was scuffing the penalty spot with his studs. He may have been shown a yellow card for his impromptu gardening, but it worked. Andre Ayew, pushed and buffeted by opponents in the unseemly brouhaha, proceeded to deliver an abject penalty.

There was a superb example of the discipline, when the substitute Edinson Cavani was tackled as he led an attack late in the second half. He fell to the turf and lay around writhing as if someone had attempted on field surgery without the benefit of anaesthetic.

When nothing was given, he looked up from his pain and saw the attack was still progressing. He leapt up to join in, made an initial mime show of clutching his apparently injured side, then dashed off to close down a Ghana defender as if nothing had happened. Because it hadn’t.

When you are denied a penalty, behave as if it is something that ought to be referred to the Supreme Court.

When Siebert visited his screen for a second time, but on this occasion decided there was not to be a penalty for Uruguay after Nunez had been tackled in the area, the response was that of an eight year old forbidden from eating the rest of the family packet of chocolate biscuits. At least one of the Uruguay players stamped their feet in fury as they bawled into the referee’s face.

The irony is Uruguay can play fine football. Their second goal was a thing of beauty, Suarez finishing off a series of deft and subtle first time passes by flicking the ball over the head of a defender to Giorgian De Arrasceata, who half volleyed perfectly into the net.

But when it turned out their victory was not enough to ensure qualification, their reaction to being evicted was pathetic. Blubbing, arguing, pushing and shoving, as good as assaulting the referee’s assistant as he made his way from the pitch, it was a disgraceful exhibition.

This is not to suggest that Ghana are saints. Nobody could describe Thomas Partey as he goes about his destructive business in midfield as the epitome of innocence. But how the neutral relished the fact that some sort of recompense was delivered for 2010.

Sure, Ghana would have preferred that it was they who advanced. But at least, if they are to depart from the competition, thanks to South Korea’s late victory, the serial bad guys Uruguay go home too. And the truth is, they will not be missed.

The Telegraph values your comments but kindly requests all posts are on topic, constructive and respectful. Please review our commenting policy.