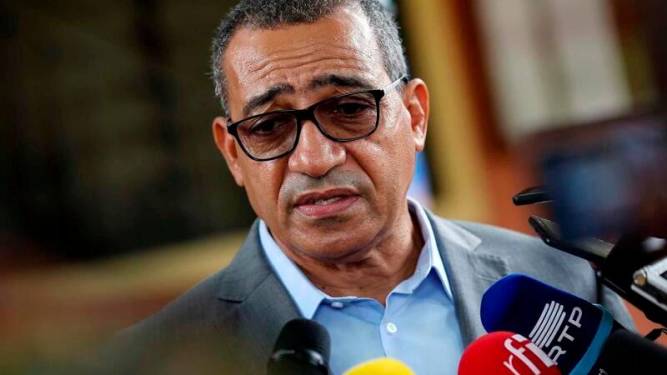 São Tomé and Príncipe, the archipelagic island state just off the coast of Gabon, is regarded as a beacon of democracy in Africa. It consistently ranks among the handful of countries on the continent that Freedom House rates as “free” because of its strong democratic institutions and civil liberties.

Yet something is bubbling beneath the tranquil surface of the otherwise idyllic Atlantic Ocean Island country. On November 25 four people were killed in what the government called a failed coup attempt. It was the country’s third failed overthrow in 27 years, the previous ones being in 1995 and 2003, with a few other minor wobbles in between.

They were “neutralised and captured” after trying to storm military bases. One of the four who died was Arlecio Costa, who once served as a mercenary in 32 Battalion. The unit, also known as the Buffalo Battalion, was disbanded in 1993. The prime minister accused Costa of being one of last week’s ringleaders.

He told AFP that the former president of the National Assembly, Delfim Neves, was among those arrested after the attack. A judicial source told AFP two inquiries had been launched to investigate the alleged assault on a military barracks in São Tomé and the alleged “torture” and “murder” of four suspects.

Gerhard Seibert, Associate Researcher at the Centre for International Studies at the University Institute of Lisbon, has a different take on the events from the government. “On Friday early morning there was an assault on the barracks to seize arms. Perhaps this was part of a planned coup but certainly not a coup attempt as such,” he told ISS Today.

“Reportedly the four invaders who had support from soldiers within the barracks were former Buffalo soldiers. After the assault had been put out by 6 am, several people were detained for supposed involvement, among them Arlecio Costa, a leader of the 2003 coup and Delfim Neves, former president of the National Assembly.

‘On Friday afternoon Costa and three detained invaders were extrajudicially executed, an unprecedented atrocity in the history of the country. Neves was released from detention on Tuesday. He claims that his detention was an attempt to eliminate him physically as happened with the others.’

Is there a common denominator, an underlying factor responsible for the three attempted coups and their failure? Jonathan Powell, a coup expert and assistant professor of security and international affairs at the University of Central Florida, says the 1995 and 2003 upheavals were largely driven by the disenchantment of soldiers with their poor conditions.

Seibert believes that the commercial interests of the Christian Democratic Front (FDC) political party – which former Buffalo Battalion soldiers had formed – were also a motive for the 2003 coup. Both coups were reversed after African and wider international diplomatic intervention.

The Buffalo soldiers who joined the 2003 and 2022 assaults were Saotomeans recruited in the 1980s by apartheid South Africa to fight Angola’s ruling People’s Movement for the Liberation of Angola (MPLA) and its Cuban allies. The Buffalo Battalion comprised largely of former fighters of Angola’s National Front for the Liberation of Angola (FNLA). After the battalion was disbanded in 1993, the Saotomean soldiers returned home, remaining a disruptive influence.

However Powell believes that although there were important links with the 2003 coup, last week’s attempt was driven less by soldiers’ grievances and more by complex political causes.

“My impression is that Costa was probably recruited for the November 25 coup attempt by political elements unhappy with São Tomé and Príncipe’s recent elections,” he said.

The presidential poll in July 2021 and this September’s legislative polls were both won by the Independent Democratic Action (IDA).

Powell notes that Neves had been accused of deliberately delaying the runoff after the indecisive first round of the 2021 presidential election. Neves had cancelled multiple parliamentary sessions that would have set the runoff date.

He had hoped to postpone voting beyond the permissible deadline, which would have meant he, as National Assembly president, would become interim president in terms of the Constitution. His ruse failed and on September 5 last year, the IDA’s Carlos Vila Nova won the runoff and became president. On September 25, 2022, the IDA’s Trovoada became prime minister when the party won the legislative elections.

Seibert isn’t so sure. He notes that the government “immediately classified the failed assault as a coup attempt by people who refused to accept the election results”, but suggests this interpretation may have been self-serving. He says a conclusive reading of Friday’s events depends on ongoing investigations, helped by Portuguese criminal investigators.

All of this points to an apparent shallowness in São Tomé and Príncipe’s democracy despite its consistently high ranking by Freedom House and the Ibrahim Index of African Governance. The latter placed it 12th in Africa with a score of 60.4 per cent, with an even higher ranking of ninth, with 66.6 per cent, for democratic participation.

These rankings have been achieved despite considerable poverty and sharp inequalities, which could also feed the propensity for coups.

Looming rather ominously on the horizon is a possible resource curse. Seibert suggests the 2003 coup attempt might have been motivated partly by a fear that ordinary Saotomeans wouldn’t share in the offshore oil bonanza that then seemed imminent.

Nearly 20 years later, São Tomé and Príncipe remains a “nascent” oil state as expected drilling has either not yet begun or hasn’t yet delivered. When and if it does, the country could face its toughest test of democracy and good governance.