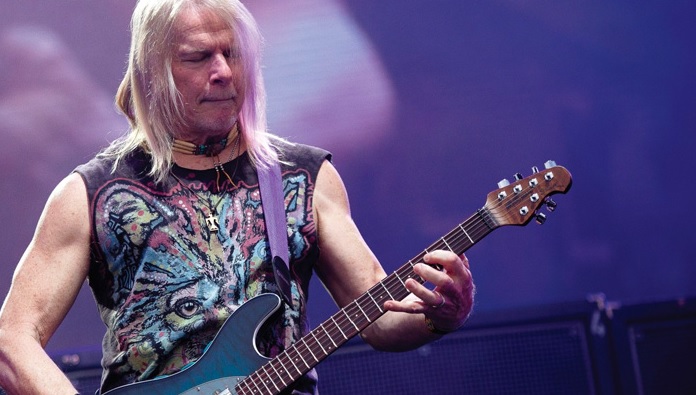 When R-n-R music genre took the world by storm in 1960s, it also birthed exceptional guitarists

Choosing one virtuoso above another is incredibly tough, with everything from the Strat to the Les Paul, PRS Custom to the Parker Fly, power chords and tapping. Indeed, it was reported that the topic had prompted a number of intense debates.

Although there were plenty of six-string slayers in the 1960s, the 1980s altered the paradigm of what could be done with a conventional electric guitar. We developed a list of the best guitarists in the world, based on their methods and contributions to the instrument. Is there a shredder on this list that you like?

Although Robert Fripp, the founder of King Crimson, is responsible for musical innovations such as Frippertronics, soundscapes, and the so-called “new standard tuning,” he paid his dues by working as a session guitarist for notable musicians such as David Bowie, The Talking Heads, Peter Gabriel and Blondie for decades.

Steve Morse is the lead guitarist for Deep Purple since 1994 and the founder of the Dixie Dregs. Morse was born and reared in the Michigan city of Ypsilanti. Steve Morse became the lead guitarist for the popular rock band Kansas in 1986. While he was a member of the band, the albums Power and In The Spirit of Things were released. Despite the fact that he is now a part of the Flying Colors supergroup, Morse claims that while he was with Deep Purple, his comrades required him to ride in a separate van because he would constantly play guitar while they travelled from gig to gig.

Peter Green was born in London, England, and was a co-founder of Fleetwood Mac. In 1965, he was hired by Mr John Mayall, the British blues godfather, a guy who had discovered more than a few guitarists on this list, and his career took off. In truth, the guitarist who Peter Green replaced in John Mayall’s band was none other than Eric Clapton, who, as you might assume, is farther down this list.

Trower was born and raised in Southend-on-Sea, Essex. Due to his Jimi Hendrix-like powers and his ability to bend notes better than any other musician alive, he was regarded as one of the best guitarists of his time. His guitar playing got even more prominent when he was a member of the famed group Procol Harum in the 1960s. Trower’s pinnacle achievement is widely regarded as the album Bridge of Sighs, released in 1974. Trower created a band with Jack Bruce, Cream’s bassist, in the 1980s.

Tom Morello grew up in the Libertyville, Illinois area. He received a BA in Social Studies from Harvard University before becoming a rock god. Morello met Zack de la Rocha in the 1990s. Tom and Zack established Rage Against the Machine, one of the most prominent and influential rock bands of the 1990s. In Los Angeles, Rage Against the Machine performed outside the Staples Center Convention Center, which was hosting the Democratic National Convention at the time. The audience became increasingly outraged and angry as the act progressed, eventually resorting to throwing rocks at one point.

Malcolm Young was born in Sydney, Australia, and co-founded Australia’s biggest rock band, AC/DC, with his brother Angus at the age of 20. While Angus took the lead, Malcolm began to play rhythm guitar. They adopted the name AC/DC after noticing the letters on the top of their older sister Margaret’s sewing machine, according to tradition. By the late 1970s, Malcolm and his band were touring Europe with Black Sabbath. They were thought to have had a strained relationship with Black Sabbath. When things got heated, Sabbath musician Geezer Butler allegedly pulled out a knife on Malcolm, according to one report.

Another brilliant artist of his day was a precursor. This founding member of the Beatles died of throat cancer in 2001 at the age of 58, which he blamed on years of smoking. In 1992, Harrison received the first Billboard Century Award. Marking Harrison’s “critical role in laying the groundwork for the modern concept of world music.”

Michael Schenker, the famed guitarist, was born in January 1955 in the little West German town of Sarstedt. He was named “a legendary figure in the history of metal guitar.” The German guitarist was a founding member of the rock band the Scorpions. He and his brother, Rudolf Schenker, created the UFO band in the mid-’70s. Schenker has left and rejoined the UFO band at least three times, and each time he has created a song.

The Allman Brothers Band was founded and led by Howard Duane Allman, who was able to play with his brother, Gregg Allman. Duane was killed in a motorcycle accident in which his internal organs were destroyed. He died while he was only 24 years old. He was noted for his expressive slide guitar playing as well as his improvisational ability on the instrument. The Allman Brothers’ Live at the Fillmore East is widely recognized as one of the best live rock CDs ever recorded.

Paul Kossoff was a highly sought-after guitarist known for his remarkable timing and intricate soloing abilities. He was a guitarist in high demand because of his remarkable timing and complicated ability to solo as a member of the popular band Free. Unfortunately, Kossoff began using narcotics at the age of 15. On March 19, 1976, he died of a pulmonary embolism while flying from Los Angeles to New York. When he died, he was only 25 years old.

If his beard didn’t reveal it, Billy Gibbons, 70, is the lead guitarist and lead singer of ZZ Top. Gibbons established The Moving Sidewalks as an opening act for The Jimi Hendrix Experience early in his career, which allowed him to become good friends with Jimi. ZZ Top’s Texas blues boogie sound, which is currently selling out shows all over the world, is unquestionably due to Billy Gibbons’ genius.

Joe is on this list for a reason. Joe Bonamassa is well-known for opening for B.B. King. When B.B. King first began playing, the audience fell silent for a time when they realised it was the kid who was making the sounds. The audience went berserk when the truth was revealed, and Bonamassa has been performing in front of large crowds ever since.

Mick Taylor, a product of John Mayall’s Bluesbreakers school of producing rock guitar gods, was the blues virtuoso Mayhall was looking for. Taylor stayed with The Rolling Stones until 1974, proving that he was a cross between Eric Clapton and Jimmy Page. Taylor, according to Slash, the guitarist for Guns N’ Roses, had the greatest influence on him as an artist.