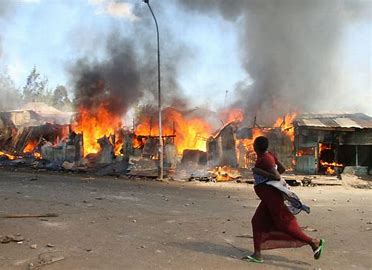 When a rogue president is in power, the very essence of being a Kenyan’s at stake

As a Kenyan human rights lawyer whose activism has been shaped very much by my Christian faith and inspired by the example of Christians elsewhere who have used their faith to push for social change, I like to share some of my personal experiences of speaking truth to power in an unpredictable and dangerous environment and the lessons I have learned on the difference individual Christians can make in Africa by taking personal responsibility not only to practice their faith privately and when it is safe, but also publicly and when it is risky.

On the morning of New Year’s Day, January 1, 2008, as Kenya tittered on the brink of a full-scale civil war following a disputed presidential election, I sat pensively at Ufungamano House in Nairobi amidst a hundred or so top church leaders from all denominations who had gathered at short notice to deliberate on a Christian response to the violence that was quickly engulfing the country.

The city was on a 24-hour unofficial curfew as most people chose to remain indoors while the country collectively held its breath and prayed. They watched scenes on television that were reminiscent of what we had only come to associate with the worst of African civil wars with marauding youths marching bear-chested, menacingly brandishing machetes, destroying random properties and chanting “Haki yetu (We demand our right!).”

In the Rift Valley, Central, Nyanza and parts of Coast provinces, thousands of people trekked from their homes with their meagre belongings on their backs and terrified children in tow to escape murderous gangs who were out to avenge what they considered to be a stolen election, while their protagonists sought to avenge the killings and evictions of their ethnic kin who were perceived to have supported the wrong candidate in Kenya’s most closely fought presidential election since independence.

Incumbent President Mwai Kibaki had been declared winner of a highly flawed election and had rushed to have himself sworn in at dusk for a second term, but challenger Raila Odinga had rejected the result. By the time the brinkmanship between the two men and their respective parties and supporters was resolved through the intervention of the international community, over 1,100 Kenyans would have met a brutal and violent death while over 300,000 would be displaced from their homes and sheltered in camps for internally displaced persons (IDPs).

The emotional toll on countless others who were raped, forcibly circumcised, otherwise permanently injured and whose homes were razed to the ground and crops burned in the field cannot be quantified.

My then newly-wedded wife, Katindi, and I remember in the early days of the violence watching on local TV a sad story of a young Luo family facing the same predicament that faced countless others who had been caught at the wrong place at the wrong time. The husband and father had been viciously attacked with machetes and was admitted at ICU at the Kikuyu Mission Hospital while his young wife who was eight months pregnant and her 18-month old boy sought shelter out in the cold at the local Police Station as she and a hundred or so migrant Luo workers ran to escape certain death at the hands of Kikuyu youths out to eliminate them.

We felt the need to help this family, and not just because this was our Christian duty; we felt very deeply that the very meaning of being a Kenyan was at stake and it was vital that we go as the messengers of the Kenya that we were struggling to build; a Kenya where the pain of anyone, regardless of the sound of their last name, was the anguish of us all.

We therefore took great risk to venture outside when the majority of citizens preferred the safety of the indoors, set aside some of our own clothes and some of the gifts that we had received from our wedding guests barely three weeks before. We shopped for some basic foodstuffs, and headed off for Kikuyu, about 20 miles North of Nairobi, in search of this family.

We found the young mother sitting on the grass lawn outside Kikuyu Mission Hospital breastfeeding her toddler as they waited for visiting hours to see her husband. We introduced ourselves and the purpose of our visit and struck up an immediate friendship as she shared with us the horrors that had been visited upon her small community of migrant workers in Kikuyu township on the night the election result was declared when Kikuyu youths descended upon them with crude weapons baying for blood.

Soon, it was visiting time and without missing a beat, she asked if we minded looking after her baby as she went in to see her husband. The fact that a Luo woman, whose husband had almost been killed by Kikuyu men, would leave her child under the care of a Kikuyu and Kamba couple whom she had not known half an hour before was a sign from heaven that, despite the dark clouds that had descended upon our beautiful skies, Kenya would survive, and that our generation would yet become the eyewitnesses of the miracle of our rebirth.

But back to Ufungamano House. I had been urgently summoned this New Year’s Day by a friend who worked with a Christian organisation to work with the church leaders in thinking through an appropriate response to the unfolding tragedy.

After struggling with accusations and counter-accusations as to which tribe was to blame for the catastrophe, the church had set up three committees to address the immediate needs – a humanitarian committee to mobilise succour for the IDPs, many of whom were seeking shelter in church sanctuaries across the land; a political committee to try and broker dialogue between the two political protagonists; and a spiritual committee to mobilize prayer and deal with the spiritual dimension of the crisis. This effort was supported by a media liaison committee to help the church to communicate with the nation about its emergency efforts.

As a member of the media committee, I had a front row seat and was able to witness first-hand the division of the church leadership as it was usually near-impossible for them to agree even on the wording of a simple press statement without degenerating to finger-pointing across ethnic divides.

As we wrestled with the various issues to be considered, news came in that a church in a place called Kiambaa in Eldoret, in which villagers fleeing the violence had sheltered, had been burned down and that 35 people – mainly women – children and the disabled had been burned to death. This was the most extreme but by no means the only case of a church being burned down during the crisis.

News of church burnings and Christians turning on other Christians from different ethnic groups added a whole new dimension to the unfolding tragedy. For Kenyans are generally a religious people who revere their places of worship. That churches could now be torched seemingly with so much ease as a result of political conflict begged the question as to how seriously one could take the oft-quoted statistic of Kenya being a Christian country where 80 per cent of the people claim to be Christians.

Was this a classic case of Christianity in Africa being a mile wide but less than an inch deep?

As I contemplated the unfolding tragedy and as I listened to the church leaders who seemed unable to speak coherently to each other, let alone prophetically to the nation and to the unfolding situation without themselves retreating to tribal loyalties.

I could not help but wonder to myself what the role of the Church was in Kenya’s volatile and polarized politics.

I wondered, too, how the Church had come full circle from being considered the voice of reason in its consistent and courageous stand against dictatorship and oppression in Kenya during the one-party days – a voice which even the most diehard Moi supporters dared not ignore – to the sad place where it now found itself on this New Year’s Day when no one seemed to take it seriously in its effort to express itself on the matters of the greatest social and political concern in our day.

As part of a society struggling to come out of a deeply traumatic experience following the 2007 elections and subsequent political contests, the Church in Kenya has been left deeply wounded, disoriented and almost without voice.

Fortunately, the Church can learn from the experiences of churches in other countries and different ages such as Germany after the Second World War or South Africa after apartheid. To do so, the Church must quickly move to recover its authentic voice, restore its credibility and play its prophetic role in advancing the cause of justice, true healing and genuine reconciliation in the wake of the Kenyan crisis.

In January 2008, when Kenya was falling apart and looking for moral leadership, the Church stumbled and could not give a clear direction. The peace agreement signed between the politicians in February 2008 and the new Constitution adopted in 2010 gave the country some breathing space, but the root causes that led to the crisis are far from resolved.

The Church must take advantage of the ceasefire to get its own house in order that in the event of a future flare-up, it shall be there to speak with authority and to continue leading the country along the treacherous path to healing, reconciliation and true nationhood. May we be found prepared.