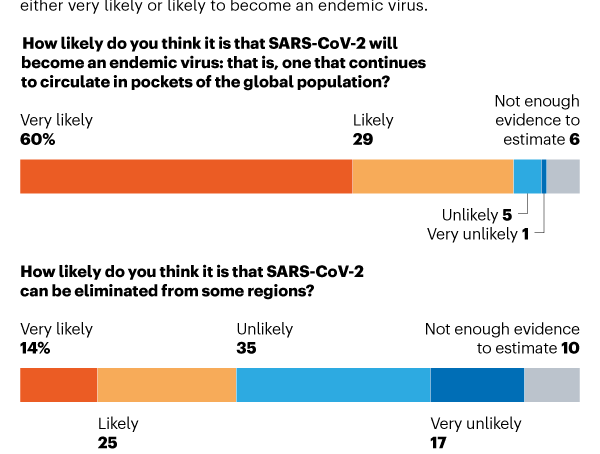 If vaccines do block transmission, and if they remain effective against newer variants of the virus, it might be possible to eliminate the virus in regions where enough people are vaccinated so that they can protect those who are not contributing to herd immunity.

A vaccine that is 90 per cent effective at blocking transmission will need to reach at least 55 per cent of the population to achieve temporary herd immunity as long as some social distancing measures – such as face masks and many people working from home – remain in place to keep transmission in check, according to a model developed by Alexandra Hogan at Imperial College London and her colleagues.

A vaccine would need to reach almost 67 per cent of people to provide herd immunity if all social distancing measures were lifted.

But if the rate of transmission increases because of a new variant, or if a vaccine is less effective than 90 per cent at blocking transmission, vaccine coverage will need to be greater to blunt circulation.

Vaccinating even 55 per cent of the population will be challenging in many countries. “The virus will stick around if parts of the world don’t get vaccinated,” says Jeffrey Shaman, an infectious-disease researcher at Columbia University in New York City.

Even if the virus remains endemic in many regions, global travel will probably resume when severe infections are reduced to levels that health services can cope with, and when a high proportion of people who are vulnerable to severe illness have been vaccinated, says Dye.

The 1918 influenza pandemic, which killed more than 50 million people, is the yardstick by which all other pandemics are measured. It was sparked by a type of virus known as influenza A, which originated in birds. Almost all cases of influenza A since then, and all subsequent flu pandemics, have been caused by descendants of the 1918 virus.

These descendants circulate the globe, infecting millions of people each year. Flu pandemics occur when populations are naive to a virus; by the time a pandemic virus becomes seasonal, much of the population has some immunity to it. Seasonal flu still has a significant toll globally, claiming roughly 650,000 lives per year.

Jesse Bloom, an evolutionary biologist at the Fred Hutchinson Cancer Research Centre in Seattle, thinks the coronavirus might follow a similar path. “I do think SARS-CoV-2 will become a less serious problem and something like flu,” he says.

Shaman and others say the virus could also settle into a seasonal pattern of annual winter outbreaks similar to flu.

Flu seems to evolve much faster than SARS-CoV-2, allowing it to sneak past the immune system’s defences. This feature is why flu vaccines need to be reformulated each year; that might not be needed for SARS-CoV-2.

Still, the coronavirus might be able to dodge immunity acquired by infection, and possibly outsmart vaccines. Already, laboratory studies show that neutralising antibodies in the blood of people who have had Covid-19 are less capable of recognising a viral variant first identified in South Africa (called 501Y.V2), than variants that circulated earlier in the pandemic.

That is probably because of mutations in the virus’s spike protein, which vaccines target. Trial results suggest that some vaccines might be less effective against 501Y.V2 than against other variants, and some vaccine makers are exploring redesigns of their products.

Still, the immune system has lots of tricks up its sleeve, and can respond to many features of the virus, not just spike, says Lavine. “The virus is probably going to have to go through lots of mutations to make a vaccine ineffective,” she says. Preliminary trial results also suggest that vaccines can protect people with 501Y.V2 against severe disease, says Rasmussen.

More than 70 per cent of the researchers surveyed by Nature think that immune escape will be another driver of the virus’s continuing circulation. This would not be a first for a human coronavirus. In a study yet to be peer reviewed, Bloom and his colleagues show that the endemic coronavirus 229E has evolved so that neutralising antibodies in the blood of people infected with the viral variant circulating in the late 1980s and early 1990s are much less effective against more recent variants.

People are reinfected with 229E over their lifetime, and Bloom suspects that it might be harder to stave off the variants that have evolved to escape previous immunity. But scientists don’t know whether these reinfections are associated with worse symptoms.

“I would expect that over many years, accumulated mutations to SARS-CoV-2 will more completely erode neutralizing antibody immunity as we saw for CoV-229E, although I can’t say for sure how the rates will compare among the two coronaviruses,” says Bloom.

Bloom thinks it’s probable that SARS-CoV-2 vaccines will need to be updated, possibly every year. But even then, immunity from either past vaccination or infection will probably blunt serious disease, he says.

And Lavine notes that even if people are reinfected, this might not be a big deal. With the endemic coronaviruses, frequent reinfections seem to boost immunity against related variants and typically people experience only mild symptoms, she says. But it is possible that vaccines won’t stop some people developing severe symptoms, in which case the virus will continue to be a significant burden on society, says Shaman.

If SARS-CoV-2 vaccines block infection and transmission for life, the virus might become something akin to measles. “It’s probably less likely [than other scenarios] but it’s still possible,” says Shaman.

With a highly effective measles vaccine – two doses and a person is protected for life – the measles virus has been eliminated in many parts of the world. Before a vaccine was developed in 1963, major epidemics killed about 2.6 million people, mostly children, a year.

Unlike flu vaccines, the immunization for measles has never needed to be updated because the virus has yet to evolve in ways that evade the immune system.

Measles is still endemic in parts of the world with insufficient immunisation. In 2018, a global resurgence killed more than 140,000 people. A similar situation could emerge with SARS-CoV-2 if people decline vaccines. A survey of more than 1,600 US citizens found that more than one-quarter would definitely or probably decline a Covid-19 vaccine, even if it were free and deemed safe

“How successful we are at addressing those concerns will determine how many people get the vaccine and how many remain susceptible,” says Rasmussen.

The future of SARS-CoV-2 will also depend on whether it establishes itself in a wild animal population. Several diseases brought under control persist because animal reservoirs, such as insects, provide chances for pathogens to spill back into people. These include yellow fever, Ebola and chikungunya virus.

SARS-CoV-2 probably originated in bats, but it might have passed to people through an intermediate host. The virus can readily infect many animals, including cats, rabbits and hamsters. It is particularly infectious in mink, and mass outbreaks on mink farms in Denmark and the Netherlands have led to huge animal culls.

The virus has also passed between minks and people. If it became established in a wild-animal population and could spill back into people, it would be very difficult to control, says Osterholm.

“There is no disease in the history of humankind that has disappeared from the face of the Earth when zoonotic disease was such an important part of, or played a role in, the transmission,” he says.

The path that SARS-CoV-2 might take to become an endemic virus is challenging to predict, but society does have some control over it. In the next year or two, countries can reduce transmission with control measures until enough people have been vaccinated either to achieve herd immunity or to drastically reduce the severity of infections.

That would significantly reduce deaths and severe disease, says Osterholm. But if countries abandon strategies to reduce spread and let the virus reign unchecked then “the darkest days of the pandemic are still ahead of us”, he says.