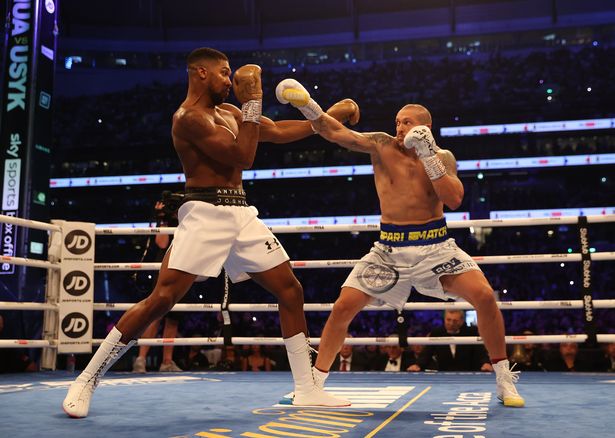 Anthony Joshua lost his world titles for the second time in four fights as Oleksandr Usyk was crowned heavyweight champion. Favourite Joshua was on the back foot from the opening bell as Usyk made a fast start to his attempt to become a two-weight world champion.

And the Ukrainian had his rival in trouble at several points in the fight – and almost stopped him in the dying seconds with Joshua finishing the bout backed up on the ropes.

All three judges then awarded the fight to Usyk by scores of 117-112, 116-112 and 115-113. Joshua was defending his three world titles for the second time since snatching them back from Andy Ruiz Jr two years ago.

He had been out of the ring since stopping Kubrat Pulev last Christmas – and had been poised to fight fellow world champion Tyson Fury this summer. But Fury was instead ordered to fight Deontay Wilder for a third time, leaving Joshua to accept the challenge of Usyk. The Ukrainian bulked up to heavyweight having conquered the cruiserweight division.

He stopped Chazz Witherspoon on his debut in boxing’s premier division before outpointing Derek Chisora behind closed doors. And 67,000 fans packed into the Tottenham Hotspur Stadium to see whether he could dethrone Joshua.

The moustachioed challenger entered the arena wearing a space helmet before Joshua jogged to the ring as he took the acclaim of his home crowd.

As the first bell rang, Usyk looked to shed his reputation as a slow-starter. He landed the best shots of the opening round via his left hand as he looked to flummox Joshua with his movement.

Joshua looked to be busier with his jab in the second stanza but was struggling to use his considerable height and weight advantages to pressure Usyk.

And the visitor landed a stinging left hook in the third round as he looked to press home his early advantage before he was served a reminder of Joshua’s power when the champion landed a right hand on the bell.

The home crowd did their best to rally their man to a response but he looked short of ideas through the fourth round.

Joshua’s right hand remained dangerous but he was unable to set up the shot with any conviction while Usyk’s precise movement was still giving cause for concern. By the halfway stage it was still the challenger who was in control on the scorecards but Joshua offered a glimmer of hope by landing with his right hand towards the end of the sixth.

But Usyk had no intention of taking a step back and rocked Joshua with a left hand in the seventh round which sent him staggering towards the ropes. Joshua switched his attacks to the body in the eighth round as he looked to soften up Usyk and narrow his likely deficit on the scorecards.

Usyk began to show the first signs of fatigue in the ninth round as Joshua managed to close the distance and force his rival to hold on.

Joshua’s right eye was beginning to swell up by the 10th round as both men showed an increasing willingness to trade at close quarters. And Usyk looked to take full advantage of Joshua’s injury as his left hand continued to find its target in the penultimate session.

Joshua was left needing a stoppage in the final three minutes – but instead it was Usyk who finished strongly. Ultimately, it was left up to the judges to seal Joshua’s fate and condemn him to a second professional defeat.

On the undercard, Lawrence Okolie made a successful first defence of his cruiserweight world title. The Londoner, who is managed by Joshua, stopped mandatory challenger Dilan Prasovic in the third round.

After a quiet opening session, Okolie dropped his opponent in the second round but the Montenegrin recovered to hear the bell. But he was down again in the next round and was unable to beat the count.

Earlier, Callum Smith announced himself to the light-heavyweight division with a brutal knock out of Lenin Castillo in the second round. Castillo required lengthy medical treatment before being carried out of the ring on a stretcher and rushed to hospital.

Campbell Hatton, son of Ricky, won his fourth professional fight despite a less-than-convincing display against Sonni Martinez. The 20-year-old looked set to lose after being rocked by the Spaniard but was given the nod by the referee by a single point.