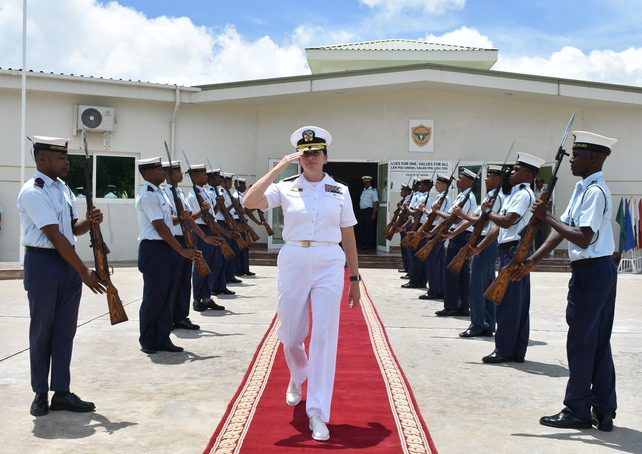 US Naval Forces Africa in collaboration with the militaries of eastern Africa have intensified efforts to end illicit trade in the Indian Ocean. The mission to fight crime in the ocean is based on history of the region as a playground for smugglers, illegal fishing, piracy and human trafficking.

According to diplomacy and military publication, the DefenceWeb, “The Indian Ocean is used by many illegal networks involved in drug smuggling, trafficking of illicit goods, illegal fishing, piracy and human trafficking. There are well established routes along the East African coast and up to the Middle East and Asia that smugglers and illegal fisherman utilise with relative ease.”

The DefenceWeb says that in combatting these illegal networks, a combined and concerted effort from all nations can lead to better maritime security, according to Rear Admiral Jeffrey Spivey, Vice Commander of US Sixth Fleet and the Director of the Maritime Partnership Programme in Africa for US Naval Forces Europe and Africa.

One part of this effort is the Cutlass Express exercise that is hosted by the US Navy. It is a shared commitment by East African and West Indian Ocean nations to enhance their information exchange to improve their collective effectiveness at sea.

This year’s Cutlass Express was hosted by Kenya, which saw meetings with 20 senior leaders from maritime nations that are partners with the US and European nations. The exercise is a chance for participating nations to develop and enable partnerships with each other, in turn developing regional security and building maritime capacity throughout Africa, the US Navy said.

Captain Cannon Neslen, Cutlass Express exercise director and US lead for theatre security cooperation representing Naval Forces Africa, said a lot was accomplished. There was noticeable building of relations and capacity with East African participants. There was also an improvement in the safety and security of the regional maritime environment.

“We have witnessed first-hand the participating nations’ improvement in maritime domain awareness, primarily through the use of the SeaVision web-based enabled tool,” explained Neslen. Cutlass Express 2021 executed numerous counter-illicit trafficking scenarios in East African waters, focusing on countering illicit arms and weapons. Expertise was also drawn from the United Kingdom, India, and Georgia.

Spivey elaborated on the agreement, saying, “It is designed to counter illegal activity, unreported and unregulated fishing, drugs, and weapons of mass destruction.  It’s an agreement between governments that empowers the military and the coast guard to partner for both law enforcement and safety on the high seas.”

Cutlass Express was established in 2011. The exercise is part of the Djibouti Code of Conduct, which is an information-sharing network in East Africa and the Western Indian Ocean nations. This agreement was updated in 2017 and that update is known as the Jeddah Amendment.

The purpose is to enable the blue economy and to broaden the scope of deterring illicit trafficking at sea, human trafficking, and the illegal wildlife trade.

Cutlass Express is one of three maritime exercises held by US Naval Forces Africa in 2021. The first was Obangame Express in the Gulf of Guinea earlier this year, followed by Phoenix Express in North Africa and the Mediterranean.