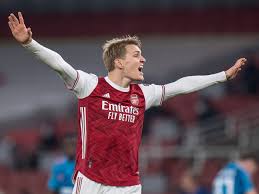 Martin Odegaard is considering a return to Arsenal as he is struggling to settle at Real Madrid, reports in Spain say.

The Norway international joined the Gunners on loan from Madrid in January and thrived under Mikel Arteta for the second half of last season. Earlier this summer, Arsenal were keen to keep Odegaard either on loan for another campaign or agree a permanent deal with Madrid.

However, Odegaard revealed last month that Madrid is planning to keep him for the upcoming season and said it is his “dream” to play for the Spanish club. He returned to pre-season training with Madrid earlier this month but according to Cadena SER, the 22-year-old has looked “disconnected” with his teammates

The report claims that Odegaard “is not 100 per cent happy” at Madrid and is now considering his future with the prospect of a return to Arsenal potentially available.  He played in Real Madrid’s opening pre-season fixture against Rangers.

An example of the apparent disconnect with Odegaard was evident during a training clip released last week as the midfielder’s goal during a shooting drill was met by an awkward silence from his Madrid teammates.

He featured in Madrid’s first pre-season fixture on Sunday as Carlo Ancelotti’s side were beaten 2-1 by Rangers at Ibrox.

Speaking last month, Odegaard said: “Of course it has always been a dream to play there. I have been in the club for over six years now, and that has always been the goal. I always want to play; I have said that all the time. Playing hard is important.”

Arsenal, meanwhile, remain in the market for a new attacking midfielder and are targeting Leicester City’s James Maddison. The Foxes are demanding a transfer fee in excess of £60 million for the 24-year-old.

The Gunners are also expected to complete their £50m deal to sign Brighton centre-back Ben White this week.